Seismic activity in Peru is caused by subduction of the oceanic Nazca plate beneath the South American continental plate, generating the Central Volcanic Zone (CVZ) as part of the Andean Volcanic Belt. However, active volcanoes are found only in southern Peru, at the beginning of the CVZ which extends south into northern Chile. The rest of the country’s cordillera belongs to a volcanically inactive gap, where the Nazca plate slides down at such a shallow angle that magma is not generated.
Some 400 volcanoes have been determined in Peru, but most of them are no longer active. The 12 most active volcanoes are:

Map of southern Peru. Click on it for complete map.

Misti, Ubinas, Huaynaputina, Ticsani, Sara Sara, Sabancaya, Coropuna, Ampato, Tutupaca, Yucamane, Purupuruni and Casiri. There are more volcanoes which are thought to be active but no signs of activity has been recorded in recent times. Volcanic eruptions during the last 500 years have caused enormous damage to villages, farmland and infrastructure (roads, waterways, etc.). In historic times, the most tragic events occurred in southern Peru: the explosive eruption of Huaynaputina volcano in 1600 AD, during which over 1,500 people were killed and more than 10 smaller villages located in the vicinity were destroyed (Thouret et al., 2002).

Today, volcanologists expect mild to moderate explosive eruptions of any of the seven active volcanoes of southern Peru, which can cause serious damage in surrounding villages and infrastructure, but mainly affecting the health of people by polluting the air with ash and toxic gases.

El Misti (5822 m) is a symmetrical andesitic stratovolcano in southern Peru near the city of Arequipa. It is also known as Putina or Wawa Putina (Guagua Putina), and El Misti translates as The Gentleman. The volcano with its distinctive conical shape dominates the cityscape and is considered landmark of Arequipa. It is not the only volcano around Arequipa, but the most famous and elegant, and in the middle of two smaller volcanoes, the “Chachani” (the Beloved) and the steep “Picchu Picchu” (the Top Top). An Andean legend says that when the Earth was created, El Misti was a man and Chachani a woman. Another man, called Picchu Picchu fell in love with Chachani, but she chose to live with Misti forever. The legend tells us that Picchu Picchu cried a lot, and his tears became the lagoon which is at the top of the mountain. Today, it is possible to see the two lovers together, while Picchu Picchu seems to observe them from a certain distance.

El Misti has three concentric nested summit craters with active fumaroles, the mineralogy of which is essentially sulfur, anhydrite, gypsum and ralstonite which are precipitated by acid vapors at 100°C–125°C. The inner crater is a sulphurous yellow cavity with bubbling mud and volcanic fumaroles hissing gas. Misti’s biggest eruption, a Plinian VEI 4, occured ca. 2070 years ago. Since that time numerous small confirmed and unconfirmed eruptions were reported, some of which may just have been increased fumarolic activity. El Misti’s most recent activity has been dominantly pyroclastic, and strong winds have formed a parabolic dune field of volcanic ash extending up to 20 km downwind. A report in 1984 indicates the presence of a dome about 150m in diameter within the summit crater, while a report in 1985 mentions that the crater had a “flat-floor” (McLelland et al., 1989). On August 7 and 8, 1985 fumarolic activity sent steam noisily up from 6 vents within the summit inner crater (Dominique, 1985).

Mummies in the Crater…
Near the inner crater six Inca mummies and rare Inca artifacts were found in 1998 during archaeological excavations. A short article in ABC News from Oct. 1, 1998, sais: “Archaeologists found six frozen mummies of people sacrificed to Inca gods more than 500 years ago on a snow-capped volcano in Peru’s southern Andes. The well-preserved mummies were found in two graves buried with ceremonial pots, gold and silver statues, along with cloth blankets burned by volcanic ash, […]. The find was made in mid-September near the crater of the 19,100-foot El Misti volcano, 465 miles southeast of Lima. ‘This is an important find because it shows that El Misti is the mountain with the greatest number of human offerings in the world,’ said Salas, coordinator of the archaeological team. The same team […] in 1995 found a mummy known as ‘The Ice Princess’ atop a nearby mountain, thought to be the best preserved mummy from the pre- Columbian era. The Incas, whose empire covered most of the Andes along South America’s western coast before the Spanish arrived in the 16th century, practiced human sacrifice to appease their gods. Many mummies from Peru’s pre-Columbian Indian cultures have been found, but few have been frozen. Frozen mummies are better preserved and can reveal more information, scientists say. Copyright 1998 Associated Press.” However, the mummy in the Misti crater can not have been preserved frozen, as a study on glaciation and permafrost on El Misti states that there is no permafrost on this volcano unlike on some neighboring extinct volcanoes.

Geological studies (e.g. Thouret et al, 2001) indicate the possibility of deposits of ash fall on the city of Arequipa ranging from 1-50 cm, and, in the case of major eruptions, pyroclastic flows and lahars that could reach and possibly inundate the city. As the city has spread outwards along the Quebrada El Guarangal on the western flanks of the volcano, this quebrada would be a major channel for lahars or pyroclastic flows during future eruptions.

Mudflows and/or landslides from the loosely consolidated upper slopes would also utilize this channel. While the absence of extensive permanent ice on the volcano reduces the mudflow risk, a considerable hazard to Arequipa remains. Arequipa is built directly on ash and lahar deposits from the eruption of El Misti ~2000 years ago.

The latest plinian events produced about 15-m thick andesitic scoria deposits on the volcano summit. The deposit blanket NE of the volcano. indicate a NE downwind direction. From satellite data LANDSAT-TM based on reflection intensity ( Garcia Zuniga F.F., 1998), two partially superimposed fan-shaped deposits were identified where lower intensity can be followed up to 35 km away from the vent and higher intensity can be followed up to 25 km. Comparing existing models of tephra falls dispersion with that of Misti, it could have been produced from eruptive columns about 20 km high and 10 to 20 m/s wind velocities. These data define the range of plinian events that have occurred at Misti and could help mitigate volcanic hazards in Arequipa region in the case of volcanic reactivation and change of wind directions.

The district has grown at an accelerated rate over the last 20 years, with little planning and without consideration of risk-management criteria, evidenced by the fact that settlements now occupy high-risk areas located in the streams along the sides of the volcano. Since 2005 the Misti volcano is permanently monitored by the volcano observatory of the Geophysical Institute of Peru (IGP), and first small disaster mitigation exercises have been carried out, if only with few residents of the city. 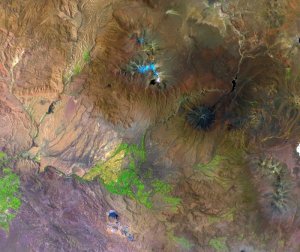 On October 5, 2011 the TM sensor onboard the Landsat 5 satellite captured this image of the city of Arequipa and surroundings. The captured area displays the volcano El Misti, and other volcanic cones, as Chachani north of the city, and Pichu Pichu to the east.It allows one to appreciate the closeness of Arequipa to El Misti volcano – the summit is 17 km from the city center, and also the course of the Chilli River, which runs north-east from the center of the city and flows through a canyon between El Misti and Chachani northbound, thus being a very probable path for lahars and PFs. South of the city the Cerro Verde mining can be observed where molybdenum and copper is mined in opencast.

Conclusion
Although El Misti has not had a deadly eruption for over 2000 years and might be seen as “dormant” at present, that does not mean that he is not able to wake up with a sobering puff-crack-bang any time. Given the proximity to the second largest city of Peru, the convenient pathways for flowing volcanic materials into the town and the long repose time since the last eruption, there is all reason to be vigilant and plan for possible disaster. I hope the authorities of the region will not “be seen as ‘dormant’ at present”, the same as the volcano, but keep in mind how many lives would be at stake if the volcano decides to go for a more serious eruption.

Aaand Another Conclusion…
While working on this article, looking at those great mountain pictures, colourful markets, flowers, strange animals, and reading reports about it all, one rambling idea began to take shape in the back of my mind: what if… could I… pull out a big chunk of my old age reserve money from under the mattress… and book a flight package to Peru… 10 days or two weeks… wouldn’t that be great? Hm, I might just do that, I’m well known for fast (and sometimes irrational) decisions! 😀 Who wants to join me?

One comment on “Volcanoes of Peru 1: El Misti – The Gentleman”