Piton de la Fournaise – review of the Eruption in Réunion

A panoramic view on the top of the volcano. Photo: Sebastian Appelt, Wikipedia

During the time of our “transition” we had hoped all volcanoes would have the decency to wait until we are ready, yet alas, the Piton de la Fournaise,  the name is French and means “Peak of the Furnace”, couldn´t hold on and let go on 4 February.

Google map showing the location of Reunion. Grab and move.

The Piton is a very active basaltic shield volcano on the eastern part of French island Réunion (63 km long) in the western Indian Ocean. Many of its earlier eruptions overlapped with those of Piton des Neiges, a shield volcano NW of it. Three calderas with numerous pyroclastic cones formed at about 250,000, 65,000, and less than 5000 years ago by progressive eastward slumping of the volcano. Dolomieu, a 400-m-high lava shield that has grown within the youngest caldera (which is 8 km wide and breached to below sea level on the eastern side), has been the most active part of the Piton in recorded history.

In the context of the Western Indian Ocean, the submarine plateau of the Mascareignes constitutes the area North to the Seychelles with Mauritius, delimiting the trench of the Mascareignes to the West (-4000 to -5000 m), that of Madagascar/Maurice in the South (-4000 with -5000m), and to Rodrigues in the East (-5000 m). On Réunion, the coral reefs are very localised covering part of the Western littoral. The lack of a continental shelf means that the sea quickly becomes deep not far from the coast.

Reunion island is the result of volcanic activity which begun

around five million years ago. Lava erupted from a hot spot in the oceanic crust to form a huge cone rather like a worm cast. It is thought that an island eventually emerged from the sea around three million years ago and gradually, with successive eruptions and much erosion became the island that is still evolving today. Two million years later, the first volcanic mass, the Piton des Neiges, was created. Deep under the ocean the “volcano” forms an immense cone with a base of 200km and a total height of about 7000m. The island, being located above a hot-spot in the Earth’s crust, is slowly, and imperceptibly, moving. It is made up of two distinct volcanoes – the Piton des Neiges (Snow Peak) which is now extinct and the younger and more active Piton de la Fournaise. [reunionisland.fr]

This time, the eruptive fault opened on the southern flank of Piton de la Fournaise. Fortunately, the first lava was found in completely uninhabited area of Réunion. 05/02/2015.    Photo : Richard Bouhet/AFP

OVPDLF reported that 180 earthquakes at Piton de la Fournaise were recorded from 04.00 to 09.00 on 4 February. A seismic crisis began at 09.10, tremor was recorded at 10.50, and an eruption began at 11.00. Seven hours, this is quite short a time to make preparations. Then observers noted that a fissure had opened on the south flank, triggering an Alert Level 2-2 and the restriction of access by the public to the summit area. The fissure was 500 m long, starting from an area located 100 m outside and to the west of Bory Crater. Activity was concentrated on the southernmost part of the fissure. Lava was ejected from the vent about 10 m high and rapidly flowed SSW towards the Rivals Crater, branched, and spread in an area S and SE of the crater. By late afternoon the farthest-reaching branch had traveled past Cornu Crater. Through the rest of the day, tremor levels decreased to a relatively low level by 18.00 hours,

and from 6 to 10 February small cones had formed over the vents and produced low gas plumes. During that time lava continued to flow from the vents, and another flow traveled further west, while one vent was weakly active with small explosions and small splashes of lava.

From February 10 – 15, the activity of Piton de la Fournaise is characterized by low tremor frequencies with slight changes but generally stable. Visibility was horrible due to bad weather most of the time, and a constant eruption plume did the rest. On the afternoon of the 15th, after some hours of jumps in intensity, the tremor died down. This marked the end of the eruption, even though a glow was still visible, which was probably due to still draining lava tubes.

Therefore, the ban on access to the top of the enclosure and helicopter landing in the volcano area remain in effect until further notice pending the recommendations and findings of volcanologists.

Map of the lava flows as of 8 February 2015 (from fournaise.info)

Erik Klemetti says: Even if the eruption didn’t have the longevity of something like Holuhraun in Iceland, it was an impressive event. The lava was able to build a small cone and a fairly impressive lava field during the course of the eruption. 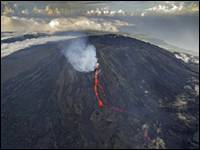 Click on this thumbnail to visit Hervé Douris´superb photo gallery

Photographer Hervé Douris (see link below) got some great images of the eruption from an aircraft that show the network of lava flows flowing down the slopes of Piton de la Fournaise, some getting diverted by cones of previous eruptions.