Sinabung continued its ongoing eruption sequence over the last several months. Eruptions are characterized by extrusion of very stiff, andesitic dacite lava and dome building. Both the dome and lava flows down the flanks are structurally unstable and periodically collapse, causing multiple pyroclastic flows down the steep slopes of the volcano. 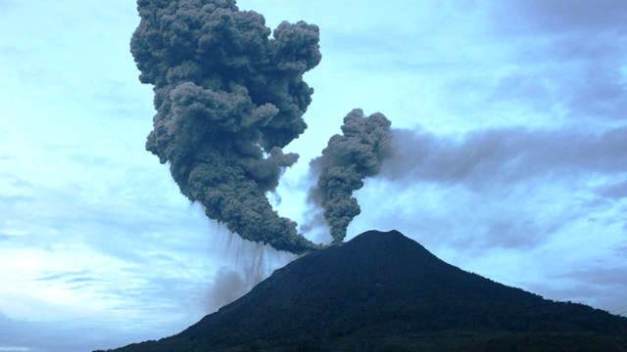 The volcano woke with an eruption in August 2010 with a series of eruptions that lasted through September. The largest explosion during that time was a VEI 2. Before 2010, with the exception of an unconfirmed eruption in 1881 that may have actually come from neighboring SIbayak, Sinabung had been quiet for nearly 450 years.

After a period of quiet, the current sequence of eruptions started in August 2013 and has been ongoing since then. Largest eruption during that sequence was a VEI 2. http://www.volcanodiscovery.com/sinabung/news.html

The August 29, 2010 eruption put ash a couple kilometers into the air after several days of “rumbling.” Local authorities evacuated some 30,000 from surrounding villages. Two days later, some 6,000 of them, mostly farmers, returned.

Two more eruptions took place on Sept 3. The largest was on Sept 7 with a plume some 5 km into the air. The eruptions were accompanied with earthquakes and pyroclastic flows. The ash combined with rainfall to coat much of the surrounding land. 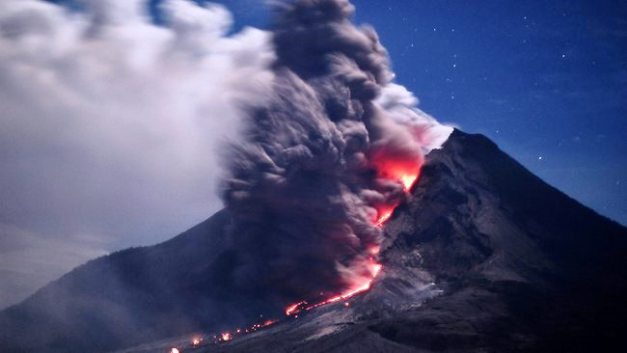 Overall, the government evacuated some 17,500 from the region near the volcano on a semi-permanent basis. Like trying to sweep water with a broom, a lot of them moved back as the mountain quieted down.

The next (and current) series of eruptions started in Sept. 2013 followed by more explosions in November with near continuous activity taking place from December through February. Eruptions consisted of multiple blasts, dome building, lava flows and pyroclastic flows as the dome and lava flows collapsed down the flank of the volcano. There were over 100 explosions in a 24-hour period Jan. 4-5, 2014.

After a period of relative quiet, eruptions commenced again with four explosions Oct. 5. Explosions and eruptions continued through most of 2015 and are ongoing as I write this report. http://www.volcanodiscovery.com/sinabung/news.html

At least 17 died during the 2014 eruptions. Tens of thousands were displaced, evacuated and otherwise deprived of property and livelihood by the eruptions. Living next to an active volcano is a double-edged sword. The soil is great and everything grows. Unfortunately the mountain recharges the surrounding soil from time to time in a most unpleasant manner.

The Smithsonian GVP Weekly Activity Report for Sinabung early September noted that there were as many as 11 daily pyroclastic flows down the flanks. The flows traveled as far as 4 km from the volcano. Ash plumes were rising some 3 km. Ashfall was covering surrounding villages and displacing some 3,000 people.

The video above calls the funnel clouds traveling down the hot ash just deposited by the pyroclastic flow as tornadoes. They are dust devils, which are very efficient in transferring heat from the surface to the atmosphere. They are common in the desert parts of the world. They are a significant weather pattern on Mars. They are not tornadoes.  https://www.youtube.com/watch?v=tzbIdE51jcg

Volcano Discovery reported an eruption Tuesday, Sept. 15 at around 0822 L which put a plume 5.4 km into the sky and a pyroclastic flow down its flanks.

Webcams for Sinabung can be found at the following links:

Mount Sinabung is a stratovolcano that sits some 40 km NW of the Toba Caldera on the island of Sumatra in Indonesia. It is a Pleistocene to Holocene volcano, giving it a maximum age no more than 2.5 MY. It may be much younger than that maximum.

The volcano is 2,460 m tall and topped with four overlapping summit craters, the southernmost of which is currently active. Activity has migrated from north to south over the years.

Some 10 km NE of Sinabung are three volcanoes – Sibayak, Pintau and Pratektekan which surround the 9 km diameter Sinkut caldera. Their last eruption was 1881. There are active fumaroles SE from the summit. http://volcano.si.edu/volcano.cfm?vn=261070

Location of Sinabung on Sumatra relative to Toba – http://ktwop.com/2014/01/13/5-km-radius-around-mount-sinabung-volcano-evacuated-as-eruptions-continue/

The Toba caldera is some 40 km SE. Sinabung is not thought to be directly connected to the Toba reservoir. It may instead be related to the much closer Sinkut caldera which sits very close to the NE of Sinabung.  I have found nothing at this time tying the two systems together though.

Gunung Kembar and the Gayolesten fumarole field are some 111 km NW from Sinabung. http://volcano.si.edu/volcano.cfm?vn=261810

The plains that Sinabung sit in are mostly farming communities. As you travel to the north and west along Sumatra, the area becomes mountainous.

Mount Sinabung is a subduction volcano powered by the subduction of the Indo-Australian Plate beneath the Eurasian Plate.

The Sunda Trench sits offshore to the west of Sumatra. There is a major strike slip fault along the western edge of Sumatra called the Sumatran Fault. Sinabung sits north of the fault line. There is also the Mentawai Fault just to the east of the Sunda Trench.

Major earthquakes off the west coast of Sumatra relatively near Sinabung include the 2004 9.1 Richter and the 2005 8.7 Richter earthquakes. The 2004 earthquake created the tsunamis that killed over a quarter million people in the Indian Ocean basin December 2004.

This series of eruptions has not shown signs of stopping. It has been compared to the 5-year long series of eruptions out of Mount Unzen following a two hundred year long period of quiet. The most dangerous thing that will take place is for locals to move back in close proximity to the volcano as they get comfortable with its current level of violence, as the pyroclastic flows are sure to follow.