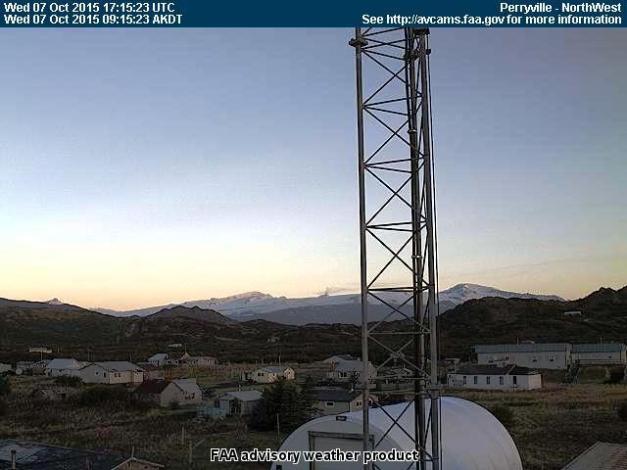 AVO is reporting a heightened level of seismicity at Veniaminof volcano on the Alaska Peninsula. The volcano has been mostly covered in clouds. When the clouds part, it shows a small steam cloud from the cinder cone in the caldera. The Observatory raised the Aviation Color Code and Alert Level to Yellow / Advisory on Oct. 1, 2015.

Mount Veniaminof is a large stratovolcano on the Alaska Peninsula measuring some 35 km across at the base. It tops out at just over 2,500 m above sea level and has a total volume on the order of 350 km3. The edifice is truncated with a mostly ice-filled caldera measuring some 8 x 11 km. Ice obscures the southern rim of the caldera and covers some 200 km2 of the southern flanks of the volcano. There are alpine glaciers descending through gaps in the caldera rim on the east, north and west slopes of the mountain. 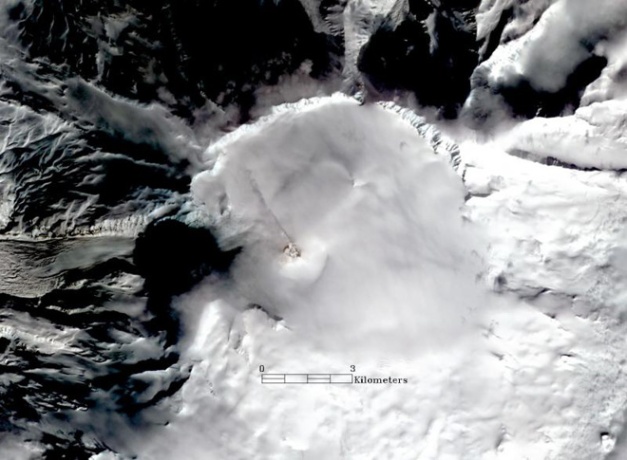 The active cone is in the western part of the caldera. There is a larger cone in the northern part of the caldera that is mostly buried in ice. This cone may have a crater up to 2.5 km in diameter. The edifice hosts a belt of cinder and scoria cones spreading some 55 km from near the Bering Sea up the mountain and down the eastern slopes toward the Pacific shore.

The caldera has old lava flows with columnar joints and glassy composition indicating evidence of widespread ice / lava interaction. Tuyas are also present in and around the caldera.

Earliest lavas were predominately basaltic and andesitic from 250,000 – 100,000 years ago. Composition switched a bit some 100,000 years ago to dacitic lavas on the south and west flanks. Significant andesite and dacite were produced some 36,000 years ago. There are abundant dikes throughout the edifice. The initial caldera formation is thought to be as recent as 28,000 years ago.

The volcano is located some 780 km SW of Anchorage. Its closest large neighbors on the Alaska Peninsula are Aniakchak some 110 km to the NE and the Emmons Lake Volcanic Complex some 200 km to the SW. Both complexes are large, active calderas that erupted relatively recently. Aniakchak most recently went caldera around 1700 BC. Emmons Lake (Pavlof) went caldera some 26,000 years ago.

Chryphia wrote about Veniaminof in a VC post some 18 months ago: https://volcanocafe.wordpress.com/2014/02/06/veniaminof/

Closest village to Veniaminof is Ivanof Bay some 32 km SW. Perryville with the only currently working webcam linked above is 35 km SE on the shore of the Pacific Ocean. Perryville has 110 people. Ivanof Bay has fewer than ten people. This is a truly remote area.

Perryville is a relatively new town on the Alaskan Peninsula. It was founded in 1912 as a refuge for the Aleuts driven out of their villages by the Katmai – Novarupta eruption. Many villagers of the Douglas – Katmai villages survived the eruption because they were out fishing at the time of the most vigorous part of the eruption. The town is named after the captain of the ship “Manning” that transported them to the new village site.

The majority of the land around Perryville is part of the Alaska Peninsula National Wildlife Refuge. Residents subsist based on hunting within the refuge and by fishing in the Pacific.   There are abundant caribou, bear and birds in the area. The land is federally owned and managed so resource development and other industries (other than federally approved tourist businesses) are discouraged. 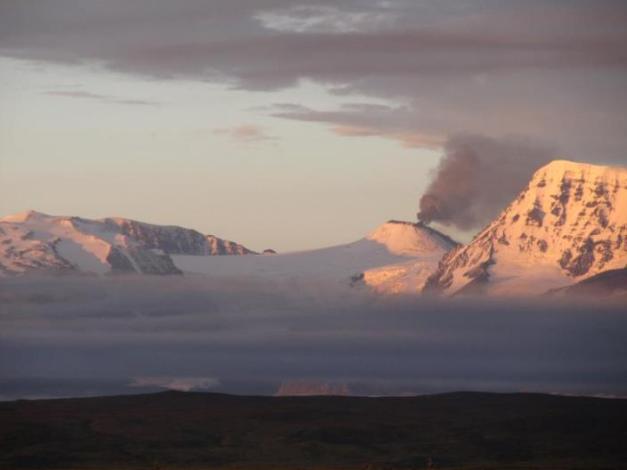 Veniaminof is a fairly active volcano, with some 23 eruptions measuring VEI 1 through VEI 3 since 1830. Most of these were VEI 2-3. The most recent eruption was 2013 measuring a VEI 3.

Most of the recent eruptions have originated from the westernmost cone and are Strombolian in nature. 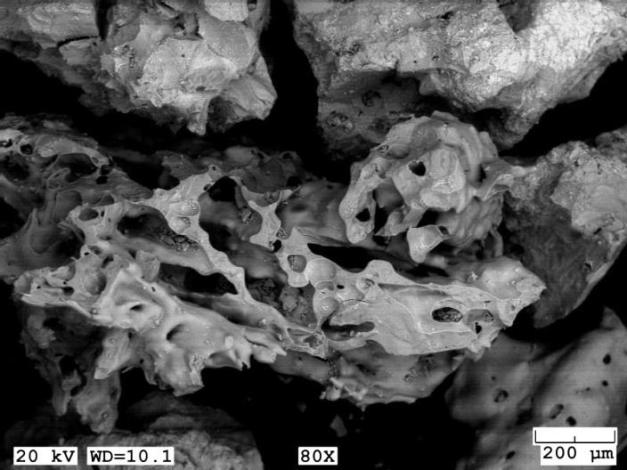 The most recent eruption from Veniaminof started in June 2013 when low frequency tremor was recorded increasing. About a week later, a largely effusive Strombolian eruption started from the intercaldera cinder cone. As the lava interacted with the ice and snow, it became an ashy eruption. The lava melted glacier ice and created a pair of cauldrons of melted water. The eruption waxed and waned for about five months until it ended. Earthquake activity slowly waned over the next six months until AVO lowered the aviation color code to green in July 2014. Max VEI for this eruption was a 3.

The volcano was periodically active from 2002 – 2009. In some places the associated explosions are divided into a series of at least seven eruptions with a max VEI of 2. Eruptions were typically explosive with plumes up to 4 km high. All were accompanied with recorded volcanic tremor. 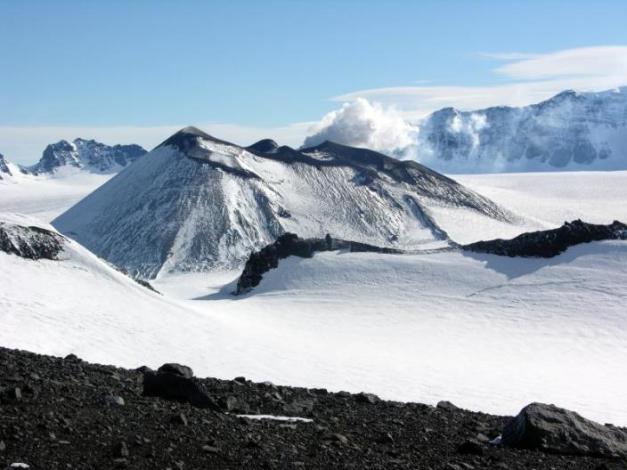 One of the problems monitoring Veniaminof is the remoteness of the volcano. That part of the state is subject to lots of weather including persistent cloud cover, rain, snow and fog which tend to limit actual real time viewing of any activity.

There was a 7.9 Mag earthquake along the Denali Fault in Central Alaska Nov. 3, 2002. It was widely felt between Anchorage and Fairbanks. Following the quake, seismicity at both Wrangell and Veniaminof changed for a bit. Seismicity at Veniaminof dropped by 80% for 15 days following the main shock. Other than Martin and Novarupta, no other volcanoes (20 of them) showed any change in seismicity.

There is a running argument among volcano observers tying volcanic eruptions to large earthquakes, with supporters attempting to make the case that large earthquakes trigger eruptions. For the most part, this has been disproven. But nothing in that discussion explains how an earthquake would decrease seismicity in an active volcano. I suspect there is a lot more to learn about the plumbing systems of this volcano and its deeper magma supply than we currently know.

The caldera-forming eruption was around 1750 BC. This eruption is poorly dated and its products overlie at least two previous caldera events. The first is dated about 1,000 years earlier or around 2750 BC. I have not found a suggested date for the earliest caldera event. The 1750 BC event ejected over 50 km3 of tephra / pyroclastic flows, around 20 km3 dense rock equivalent. Andesitic and dacite ash flow tuffs from the 1750 BC eruption can be found all the way to the Bering Sea to the west and the Pacific Ocean to the east. The two earlier eruptions are thought to have ejected 10 – 25 km3 of material that also reached the oceans on either side of the Alaska Peninsula.

The younger deposits are primarily andesitic and welded. They measure some 30 m thick closer to the cone and can be found up to 50 km from the caldera. 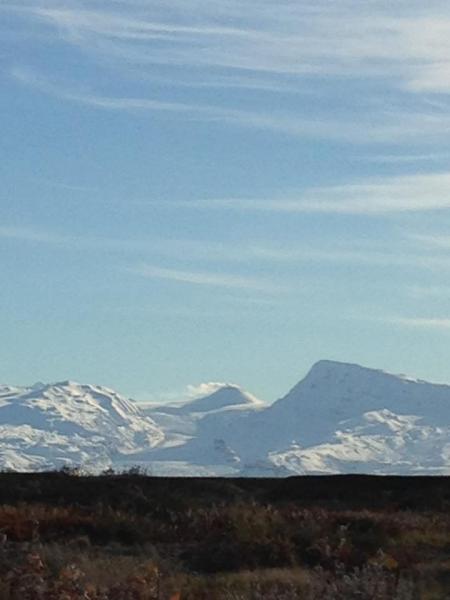 The older flow deposits are overlain by a moraine and glaciated lava flows. These deposits are similarly up to 30 m thick near the caldera and can be found some 30 km from it.

There is a younger widespread fall deposit up to 30 cm in places on top of the three caldera pyroclastic flow deposits. This indicates that magma system is long-lived and vigorous. It also indicates that the current intracaldera cone is capable of larger eruptions – Plinian to sub-Plinian – than effusive strombolian style eruptions seen today.

Due to the ice-covered nature of the southern rim of the caldera, geologists have been unable to determine how extensive the caldera-forming eruptions spread material to the south of the caldera.

The presence of multiple, large flow deposits indicate a much more complex and explosive history of the volcano than previously thought. 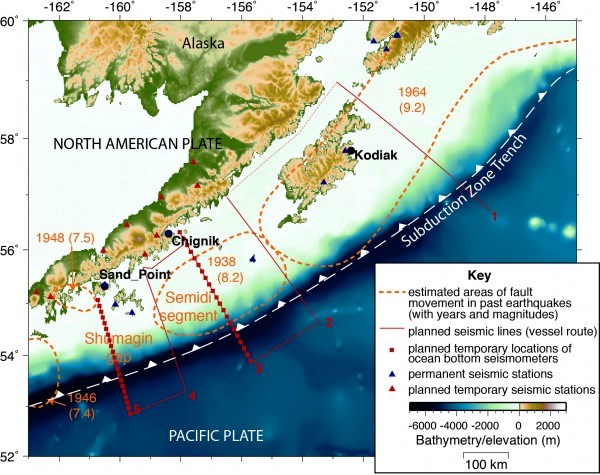 Tectonics of the Alaska Peninsula – http://blogs.ei.columbia.edu/2011/06/17/the-goal-mapping-the-alaska-megathrust/

Veniaminof is a subduction driven volcano, much like Okmok, Emmons Lake, Aniakchak and Katmai – Novarupta. The vent is well established and the magma chamber persistent. There are some 25 km of North American Plate underneath the volcano. The Pacific Plate is subducting under the North American Plate in this part of the state with movement generally WNW to NW.

The closer we look at Veniaminof, the more dangerous this volcano becomes. In my mind, it is just as dangerous as Emmons Lake or Aniakchak, its closest large eruptive centers on the peninsula. Note that those two centers are not the only volcanoes along that line. Rather, they are the two largest. We are fortunate that that this volcano is far from large population centers.