Soputan Volcano, Indonesia erupted Monday January 4 and again on January 5. The plume went nearly 13 km into the atmosphere on Jan. 5. Winds at the time pushed the ash generally north and east of the volcano.

There was a partial dome collapse on January 6 which sent a pyroclastic flow down its flanks.

Local authorities cleared out a 6.5 km radius of the volcano and as of this writing have not allowed residents back near to the volcano. There are no known deaths or injuries associated with this eruption. 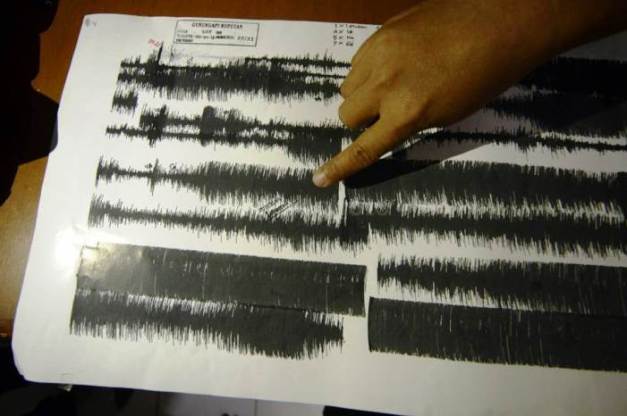 Eruption photos and a video can be found here: http://thewatchers.adorraeli.com/2016/01/05/major-eruption-of-soputan-volcano-indonesia/

Webicorders can be found here: http://webcams.volcanodiscovery.com/Soputan 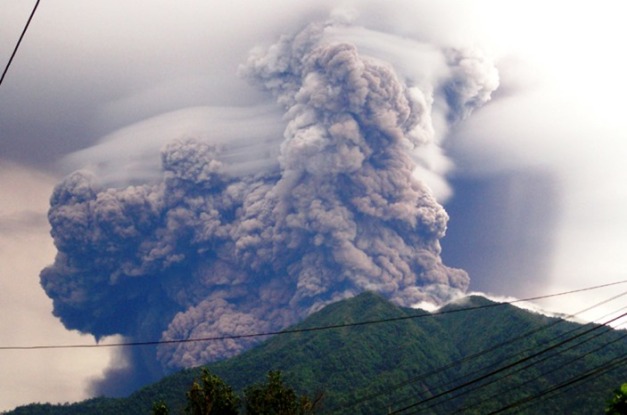 Soputan is around 1,800 m high and is a relatively new volcano. Its flanks are not thickly vegetated. It is located on the North Arm of the Indonesian island of Sulawesi. Nearly 1.7 million Indonesians live within 100 km of Soputan. 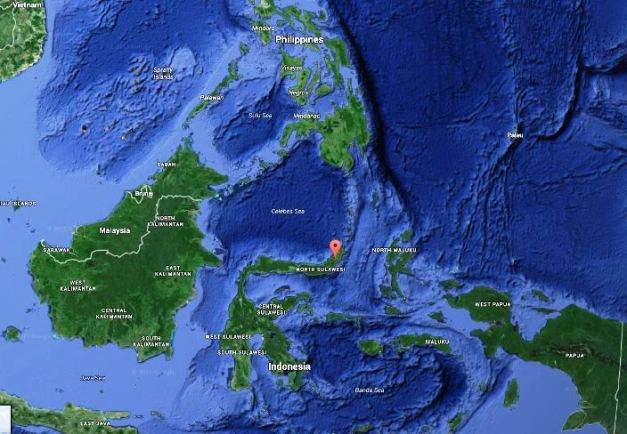 Soputan is a subduction driven stratovolcano producing primarily an andesite / basalt mix. Eruptive style is Strombolian to larger. It is a very active volcano situated on the southern rim of the Tondano Caldera. It also sits on top of a fault line.

Most of the activity takes place out of a summit crater. There was a flank vent named Aeseput that formed on its NE flank during a 1906 eruptive sequence. It was active for about 20 years following its opening and was the source to some fairly major lava flows.

There have been around 40 eruptions from Soputan over the last 600 years. Intensity of eruptions have been in the VEI 1 – 3 range with the last three prior to this month being VEI 3. They were in 2015, 2012 and 2008. The last two were VEI 3. Though unlisted, I believe the 2015 eruption was similar in size. Length of recent eruptions is 2 – 5 months.

The volcano does build domes which periodically collapse resulting in pyroclastic flows down the side of the mountain.

Shaded relief map of Tondano Caldera. Soputan is at the lower left. http://www.mountain-forecast.com/peaks/Tondano-Caldera

Soputan is one of the four active vents of the Tondano caldera system. It along with Lokon-Empung are the most active of the Tondano vents. The other two vents are Sempu and Mahawu.

Tondano is a 20 – 30 km diameter caldera system formed some 3 – 6 million years ago. Dating of lavas laid down pre-Tondano have been dated at some 2.19 million years. It contains a more recent Pangolombian caldera measuring some 5 by 3.5 km. The caldera system has no known historic eruptions over the last 10,000 years. One paper dates the Tondano Tuff at some 871,000 years old. I would suggest this was deposited by the Pangolombian caldera eruption rather than the Tondano eruption. Links to these papers are in the Additional Information section below. 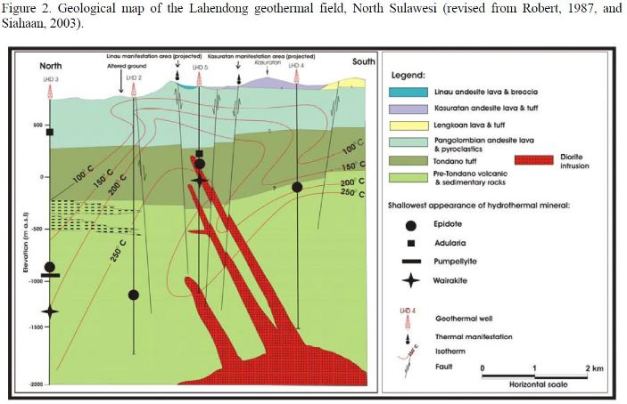 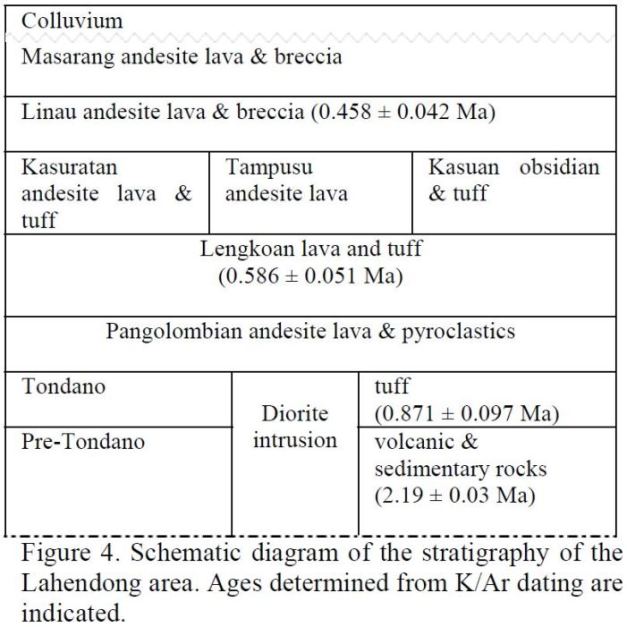 The caldera is filled with pyroclastic cones, obsidian flows and geothermal areas. A lake fills the eastern half of the caldera. The caldera-forming eruption produced several hundred km3 of material. That estimate may be low. There are active attempts to extract geothermal energy from the caldera system at the Lahendong geothermal field which is located in the Pangolombian caldera.

Eruptive products of the caldera eruptions were primarily andesitic in composition with tuffs, ignimbrites, tuffs and breccias. The caldera is laced with faults.

Carl le Strange wrote an article about the caldera system over 3 years ago in the former Volcano Café. https://volcanocafe.wordpress.com/2012/09/27/did-you-notice-the-erupting-supervolcano/

Sulawesi sits at the junction of three major tectonic plates. These include Eurasia to the west, Pacific to the East and Australia to the south. There was subduction and multiple collisions followed by Miocene and younger extension. The north arm is bound by a major fault line to the south and has rotated some 90 degrees clockwise.

This is part of the tectonic mess described in previous posts where the intersection between the three plates listed above has created a number of microplates which all jumble against one another. 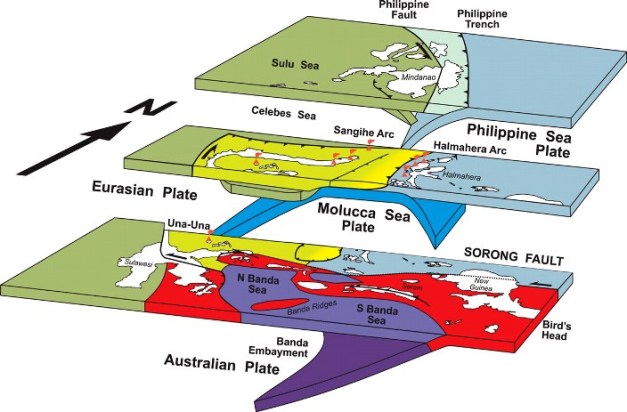 The northern arm of Sulawesi is part of a volcanic arc. Volcanic activity is subduction driven by the Bird’s Head Plate subducting under the North Arm from the east. The Molucca Sea Plate is also subducting under the North Arm from the SE. There are two subduction zones converging on the Molucca Passage. One is the eastward moving Sangihe subduction zone at the north tip of Sulawesi. The other is the western moving Halmahera subduction zone along the western margin of the Molucca Sea Plate. This is the only known example of an active arc-arc collision consuming an ocean basin by opposite direction subduction. 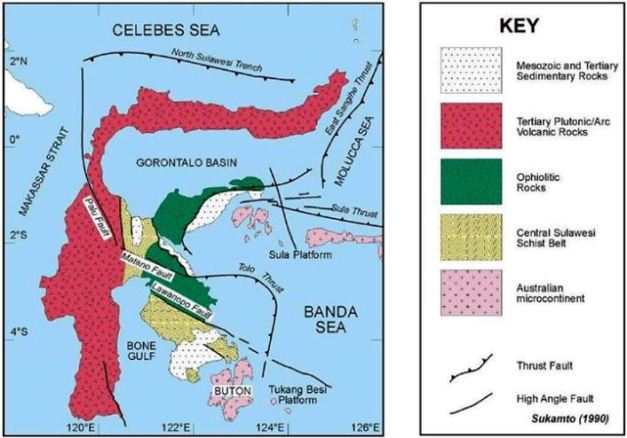 The North Sulawesi Trench is located to the east of the North Arm. A second volcanic arc from Sangihe Island to Minahasa formed due to the subduction of the Molucca Sea Plate to the west. The oldest volcano was active during the Miocene, some 20 – 5 million years ago.

It is this combination of active close subduction and jostling of microplates that appear to make large quantities of magma available for the volcanoes of the North Arm of Sulawesi.

Crust thickness under Soputan is greater than 25 km.

Soputan is a relatively new stratovolcano with a vigorous magma supply. It and its three active neighbors are busily rebuilding themselves within the Tondano Caldera to the point where they have large enough systems to go caldera. There is nothing I have come across that paints them or Tondano any more or less likely to go caldera again than their predecessors.

These are large, active volcanoes occupying a several million year old caldera. And they continue to be busy and dangerous.