Granyia wrote a very nice post on the eruptions of Momotombo last month. You can find it here: https://volcanohotspot.wordpress.com/2016/01/25/proud-volcano-momotombo/

Over the course of the eruptions, there have been some oddities on the webcams. These include burning on the flanks and some bright IR sources at the base on the mountain. Have come up a possible explanation for both.

In the first photo, you can see the volcano in eruption with a pyroclastic flow down its right flank. You also see a number of fires down its central and left flank. If you take a close look at the volcano, it is heavily vegetated about two thirds of the way toward the top. My guess (completely uneducated) is that there was a previous pyroclastic flow down the front of the volcano and the fires are vegetation at the toe of the flow. Note that vegetation above the fires is completely blackened.

One final thing from this photo is a tongue of blackened vegetation all the way to the base at the center of the face of the volcano.

I would suggest that the fires on the flanks are due to vegetation fires lit by recent pyroclastic and lava flows.

The second photo comes out of Granyia’s comment and the VH Twitter feed. This one looks a lot stranger; not unlike a UFO in the process of taking off. 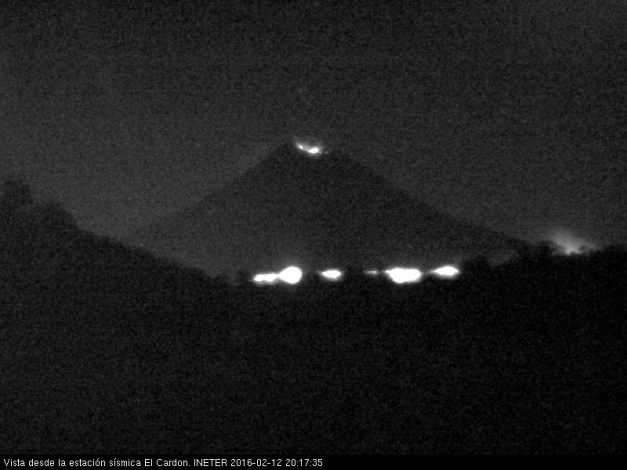 IR image of Momotombo showing hot spots at its base. http://s11.postimg.org/vp9uwfhj7/image.jpg

The oddity (at least to me) are the bright IR sources at the base of the volcano. There are a lot of ways to get that sort of heat source, some of them quite bad. Among the worst are some sort of cracks in the cone itself, incipient flank collapse, neither of which I believe are taking place, as we have not seen any source of eruptive materials from the base of the cone (yet). Other less serious possibilities include new fumaroles.

More likely sources would be related to what we saw in the first photo, vegetation fires started by pyroclastic and lava flows. Given both types of flows are making it all the way to the base of the volcano, I would suggest that they are the source.

Lava flows are also making their way to the base of the mountain. While they would show up nicely on an IR camera, the entire flow would show up as hot rather than just the tip of the tongue as seen in the following photo. 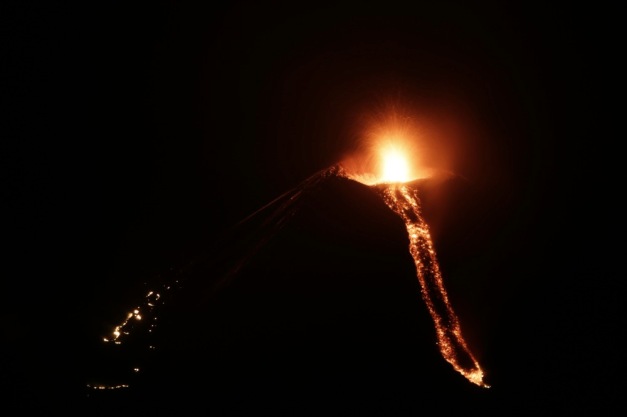 View of the Momotombo volcano erupting from Papalonal community in La Paz Centro, Leon, Nicaragua on December 2, 2015. A large volcano in western Nicaragua, Momotombo, on Tuesday belched ash and gas up to a kilometer (3,000 feet) in the sky, sparking fears that the giant could be waking from a fitful 110-year-old slumber. AFP PHOTO/ STR / AFP / STR

This visible light photo is from Dec. 2015. Note the fires around the lava flow to the left. Note the entire flow on the right shows up as hot.

Final photo from Feb 9.  This one comes courtesy of Twitter and describes what is called “cracks” in the base of the mountain.  This is the day version of the second photo.

If you take a close look at the line of incandescence, it appears to be the line of a fire working its way down the volcano foothills.  Surrounding vegetation is no longer green, indicating things are pretty dry.  This time of year in Nicaragua is normally pretty hot and dry, with 7 – 12 cm of rain in Jan and Feb.  I think these are fires lit by lava and pyroclastic flows in the surrounding vegetation.

All for now. While I think I have an explanation, it may all be arm-waving and completely wrong.   If there are any other explanations or suggestions, please pass them along.  As of today, this is my story and I’m, sticking to it.  Cheers –

Elevating a link and comment from Granyia this morning that has the national Volcanologists worried about actual cracks in the flank of Momotombo.  Appears my previous conclusion was in error.  Won’t be the last time.  Still, if you never ask the question, you never find out.  Thanks much, Granyia for the additional information.  Cheers-

13 comments on “Mystery at Momotombo”