View on Iozan from the hiking trail to Mt. Karakuni (Source)

I have searched the internet up and down but I really didn’t find a ton of information on this volcano. It is mostly just mentioned for its beautiful scenery and occasionally as a, well, rather unimportant part of the great Kirishima mountain range. So I have picked what I thought useful to give you just an idea of Mount Iō.

Mount Iō is a small volcano in the north-western part of the Kirishima volcanic complex, which is located to the north of Kagoshima Bay and covers an area of roughly 30 km by 20 km. Politically, the Kirishima complex belongs to the Kagoshima and Miyazaki Prefectures on Kyushu Island in southern Japan. This volcanic mountain range has developed on the southern edge of a pair of ancient calderas: Kakuto and Kobayashi calderas, and consists of stratovolcanoes, pyroclastic cones and maars, sitting on top of older shield volcanoes. There are no less than 23 volcanic peaks and 15 volcanic craters in it; 10 of them are now filled with lakes. Mount Iō is on the NW flank of the highest peak, Karakunidake (1700m).

Kirishima Volcano occupies an elliptical area with a long NW-SE axis. Most of the craters and parasitic cones are arranged in parallel with this long axis, and also with the estimated major fault lines. The basement rocks of the Kirishima Volcano Group consist of sedimentary rocks belonging to the Cretaceous Shimanto Group and early to middle Pleistocene volcanic rocks (Kakuto Volcanic Rocks). Those are distributed from SE to S of the volcano group as well as to the north. In the vicinity, Ito Pyroclastic Flow deposits (erupted from the Aira caldera about 250 kyBP) are widely distributed covering the basement rocks. The Kakuto basin was a lake up to that time – a layer of lacustrine deposits can be found in the NW parts.

Regardless of their age, Augite-hypersthene andesite has always been the dominant rock type of the Kirishima volcanoes. (Image right. Source)

Now, let’s sort some names first:
Ebinokōgen or Ebino Plateau is a high basin of over 1000m a.s.l. in the NW part of the Kirishima mountain range.
Ebinodake or Mount Ebino is another volcano of the Kirishima complex, west of Mount Iō.
Ebino Kogen is a small town in the mountains of Kirishima just inside Miyazaki Prefecture’s borders.

>> Ebino Kogen means “Shrimp highlands” and is so named because in late summer the tall grass that blankets the ground takes on a pinkish hue, making the area appear to be covered in fields of shrimp. Such a field of susuki grass (miscanthus sinensis) is located on the volcanic alluvial fan. The characteristic red hue is caused, among other factors, by sulfur dioxide (from nearby Mount Iō) that is oxidized to diluted sulfuric acid, which is absorbed through the soil into the plant working there as anthocyanins (pigments). It is said that in recent years the grass didn’t colour due to decreased fumarolic activity but perhaps it will do so again after this episode:) << 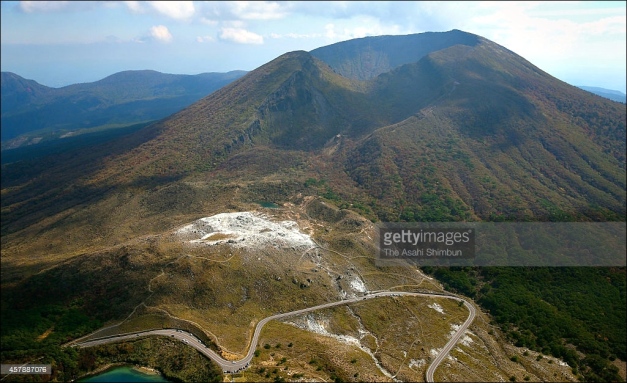 Mount Iō (meaning Sulfur mountain) is an active lava dome at the edge of the Ebino Plateau in the townland of Ebinokogen, surrounded by a handful of larger volcanoes of the Kirishima volcano complex. It is located between Karakuni-dake (a stratovolcano) and Rokannon-Mi-ike (a maar). The former has suffered a flank eruption on the NW side (date not known) thus that it appears as two peaks when seen from below. 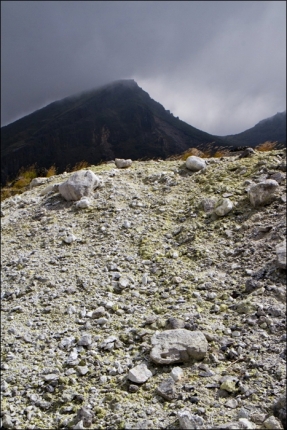 Mt. Iō is known as the youngest volcano in the range, it was formed in an eruption on the lower NW-flank of Karakunidake in 1768 (in the Edo era) and has, according to the GVP, not erupted since. Although the mountain’s slopes are covered in grasses and boulders, the 1310m a.s.l. dome is nearly barren of vegetation; its top is an oval, shallow crater-like depression of abt. 100m diameter.

Rocks and gravel there range from black and grey andesites to white-ish fumarole deposits and thermally altered rocks, dotted with the yellow specks of sulfur. The area was mined for this mineral until 1962, but there’s still plenty of it lying around; some remnants of the mine can still be seen.

This period of increased activity began in 2013 when the alert level was raised to “2” (“danger around the crater”). From that time on JMA published a gradually increasing number of reports on Iozan becoming restless.

2014: volcanic earthquakes have increased around Mt. Iō since June. On Aug. 20, a volcanic tremor lasted about 7 minutes. This was the first time to observe such tremors in this neighborhood. Also, crustal changes in the northwestern part of the mountain have been recorded.  In October, fumaroles became quite strong and seismic activity increased, but soon quieted down again.
2015: In spring the alert level was set back to “1” (“this is an active volcano”), but already on July 28, 2015, the JMA reported that elevated seismic activity had been recorded again since early July. The previous day a phase of volcanic tremor had occurred that lasted 3 minutes and a slight ground deformation was detected. Whether this was caused by an intrusion of fresh magma which in turn could lead to a new eruption was uncertain. Although the alert level had not been raised again, more few-minute tremors on 2 Sept., 19 Oct. and 31 Oct., as well as volcanic earthquakes up to 24 per day and hydrogen sulfide odor have been reported.

2016: In early January the first sightings of weak fumarolic activity were reported along with another short volcanic tremor as well as an inflation on the NW flank of Iozan and an increased area of thermal anomaly.
07.02.2016: 5-minute volcanic tremor, accompanied by a slight bulge in the inclinometer.
08.02.2016: fumaroles of 10m height were observed in the south-west and south of the crater, and a significant smell of hydrogen sulfide around the mountain. By now small volcanic tremors occur almost daily.
19.02.2016: access to the fumaroles was closed by local authorities on February 19, due to high levels of H2S.

28.02.2016: 53 volcanic eq (the highest daily total since seismometers were installed in March 2013), a further expansion of the thermal anomaly and further uplift have been noted (a total of 40mm since Oct. last year).

Since then, seismic activity has declined, no more tremors or inflation occurred and no changes in the fumaroles have been seen. The alert level has been raised to “2” – a one kilometer no-entry zone has been established around the crater, resulting in the closure of the road that connects Ebino Kogen with Kobayashi and some of the hiking trails.

But it will be interesting to see the results of the next thermal measurements, as long as the heated area is increasing the possibility of an eruption is still there.

…the Mt. Io area was the shooting site for one of the original episodes of the famous “Kamen Rider” series, a tokusatsu superhero television series and weekly science fiction manga created by manga artist Shotaro Ishinomori (remade in USA as “Masked Rider“). Two grasshopper-like, motorcycle-riding cyborgs fight the evil organization that transformed them, and, apparently, in this episode they planned to cause a huge explosion by digging a tunnel under the volcano… This was episode no. 40: “Deathmatch! Monster Snowman vs. Two Riders” (Originally aired on January 1, 1972)
The great impact of the series in Japan even resulted in astronomer Akimasa Nakamura naming two asteroids in honor of the series: 12408 Fujioka, after actor Hiroshi Fujioka, known for his portrayal of Takeshi Hongo/Kamen Rider 1, and 12796 Kamenrider, after the series itself.