The Mount Edgecumbe Volcanic Field covers some 260 km2 of Kruzovf Island west of Sitka in Southeast Alaska.  Edgecumbe is some 25 km west of Sitka.  It is 925 km SE Anchorage.  The area is relatively uninhabited, with only 7,000 living within 100 km of the volcanic field.

Output from the volcanic field has been primarily basaltic to andesite.  Over the duration of activity, the output has shifted to dacite and finally to rhyolite.  Post glacial activity has been exclusively pyroclastic. 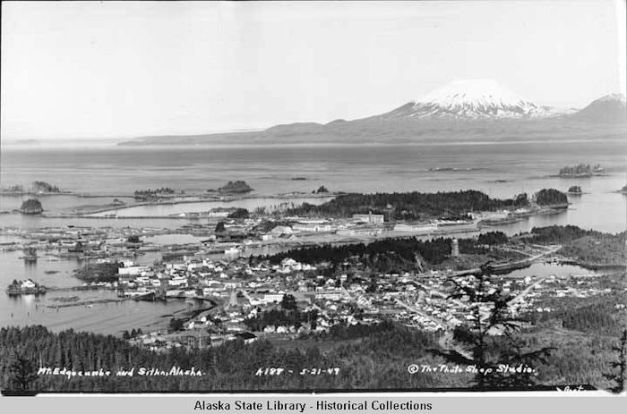 Mount Edgecumbe is a 970 m high stratovolcano topped with a 1.6 km caldera.  It is the largest volcano of the field.  Other vents are oriented along a SW – NE line paralleling the Queen Charlotte – Fariweather fault line.  These vents include composite cones, domes and fissures.

The volcanic field is not actively monitored by either webicorder or webcams.

Original activity for the field started some 600,000 years ago.  For the first 200,000 years of activity, most of the eruptions were effusive in nature from fissures scattered across the island.  Eventually some 35 km3 of material was erupted.  By 400 KA ago, eruptive activity had concentrated to a narrow zone paralleling the main fault line.

By 30 KA, construction of Mount Edgcumbe was well under way.  Crater Ridge, which is a cluster of domes, composite and scoria peaks started building just north of Edgecumbe.  There were a series of major explosive eruptions 12 – 14 KA.  The last known eruptions were 5 – 6,000 years ago.  There is no known historic activity either from local native or Russian records.

Early eruptive activity was Hawaiian in nature.  Pahoehoe lava and lava columns are present as are lava tunnels.  As activity evolved, there are volcanic breccias present from lavas that erupted under water.  Aa lavas are also present.  Basaltic lavas were the dominant lavas erupted for the first 500 KA years of activity.

As the magma chamber evolved, so did the erupted lavas.  The second phase was magma that had higher silica content such as andesite and dacite.  Mount Edgecumbe is primarily andesitic in nature.  It is topped with a caldera formed some 12,500 years ago by a explosive dacitic pumice eruption.  The Crater Ridge domes are primarily rhyolitic in nature. 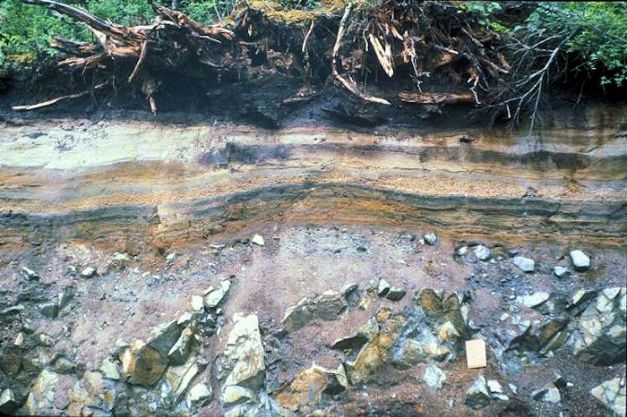 Explosive eruptions started shortly after the retreat of glaciers some 14 KA ago.  Basaltic andesitic ash came from several small scoria cones at either end of the volcanic field.  As these eruptions waned, Shell Mountain started erupting andesitic ash some 8 km NE of Crater Ridge.  Crater Ridge started erupting rhyolitic ash and Edgcumbe was erupting andesitic and dacitic ash.  Edgcumbe also erupted pyroclastic flows.  At least one Crater Ridge dome was destroyed in the course of these eruptions.  There is some speculation that isostatic rebound of the island after the glacial ice field melted triggered the ash eruptions.  This explosive activity produced some 7.6 km3 dense rock equivalent of ash.

Major eruptive activity ended some 12 KA ago.  There is evidence for pyroclastic flows and lahars some 10.2 KA ago.  The last two eruptions took place between 5 KA and 6 KA ago.

Edgecumbe is a very well defined, though somewhat smaller stratovolcano.  It looks not unlike a well defined, snow covered cinder cone.  As such, it gives itself over to Alaskan stupid guy tricks.  One such event was an effort to simulate an eruption on April Fool’s Day 1974.

Porky Bickar of Sitka decided to fool his neighbors into thinking the volcano was waking up.  He tried to charter a helicopter to fly over old tires, oily rags, and diesel to build a tire fire in the crater of the volcano.  Local charters all chose discretion as the better part of valor and declined the charter.  Bickar had to get a charter from Petersburg to fly the tires, rags and fuel over to the volcano.  They set the tires, spray painted an April Fool message on the snow and lit the fire.

Because of the necessity of air traffic for travel in the area, Bickar remembered to notify the FAA and Sitka Police about the stunt.  He forgot to inform the Coast Guard which got themselves somewhat spun up over the black smoke pouring out of the crater.  Alaska Air Lines allowed its flight crews to divert over the crater to watch the fire and view the message.  Of course, local phone lines to Sitka radio and police lit up nicely.  The story even made the AP news worldwide.

When Mount Saint Helens blew six years later, one of Porky’s buds reportedly called him and told him he went too far this time around.  http://www.olypen.com/sitkacds/porky.htm

The location of the Edgecumbe Volcanic field is somewhat unusual, as it sits some 16 km east of a major transform fault – the Queen Charlotte – Fairweather fault that defines the movement of the Pacific Plate (generally northward) along the edge of the North American Plate.  Volcanoes are rare along transform faults worldwide.

The Queen Charlotte – Fairweather fault is active and has significant earthquakes from time to time.  A 7.2 Richter quake some 48 km south of Sitka took place in 1972.

It appears that the transform fault dips under the North American Plate under the volcanic field.  Depth of the North American Plate under Kruzof Island is some 30 – 45 km, thinner to the west.  The basalt erupted has two different chemical compositions.  Early erupted basalts in the southern part of the island has characteristics of oceanic basalt.  Later basalts have continental chemical compositions.  This leads to speculation that the melting zone in the mantle straddles the fault line and that fault provide a zone of weakness for it to meet the surface.

The other speculation is that this zone of melting does not supply a continuous flow of magma to the surface, as eruptions have changed from effusive to pyroclastic over the last 600,000 years, indicative of an evolved magma chamber.  What is not understood is why has this sort of volcanic activity not taken place elsewhere along the Queen Charlotte – Fairweather fault system.  There are no large recently active volcanic vents in the surrounding area, though there may be several on the floor of the Pacific Plate in the Gulf of Alaska as it mashes into the North American Plate.

Although the Edgecumbe Volcanic Field gives every sign of being dormant, until we understand how the magma chamber was supplied, it is not possible to write off any future activity.  The change in activity over time suggests that the magma supply from the melting zone may be at best intermittent while the magma in the chamber itself evolves to a crystal mush.  But the history of several large, powerful ash-rich eruptions over the last 15 KA is enough to indicate that this volcanic field should be treated like all volcanic features with a great deal of respect.