Smoke and ash rise from the Calbuco volcano, seen from Puerto Varas city, south of Santiago, April 22, 2015. Volcano Calbuco in southern Chile erupted for the first time in more than five decades on Wednesday, sending a thick plume of ash and smoke several kilometres into the sky. REUTERS/Carlos Gutierrez

This piece grew out of some head scratching about the prevalence (or lack thereof) of volcanoes on places off the earth.  Standard weasel-worded disqualifier applies:  I am no expert.  Simply an interested observer / hobbyist writing in an attempt to put poorly formed thoughts into words.

A heat engine is defined as a thermodynamic system that uses heat to do work and exhausts the heat when it can no longer do work.  In various forms, it is the foundation of the vast majority of fueled engines that we harness in our vehicles, to generate electricity and do any of thousands of things we need machinery to do.  http://hyperphysics.phy-astr.gsu.edu/hbase/thermo/heaeng.html

Heat engines also exist in the natural world.  A simple thunderstorm is a complex system that transfers heat from the surface of the earth to the upper atmosphere.  The working fluid is the condensation of water vapor.  http://earthscience.stackexchange.com/questions/1011/can-thunderstorms-be-thought-of-as-a-heat-engine 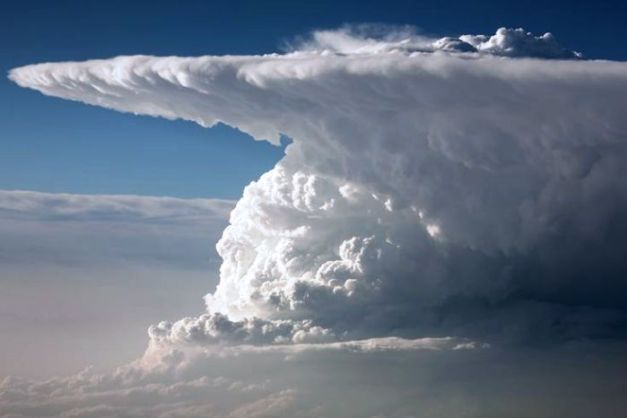 On a larger scale, a hurricane, typhoon or cyclone (depending on what part of the world you are in) is a system that transfers surface heat from the tropics where it is warmer to the northern latitudes where it is generally cooler. Once again, the working fluid is the condensation of water vapor.  http://mynasadata.larc.nasa.gov/hurricanes-as-heat-engines/

Willis Eschenbach writing in Watts Up With That a few years ago described the entire atmospheric system as a heat engine, transferring heat from the warmer tropics to the northern climes where it is generally cooler.  https://wattsupwiththat.com/2013/12/21/the-magnificent-climate-heat-engine/

Line of hurricanes and tropical depressions in the Pacific Ocean https://www.nasa.gov/content/goddard/genevieve-eastern-pacific-ocean/#.V3E-DKKJnTw 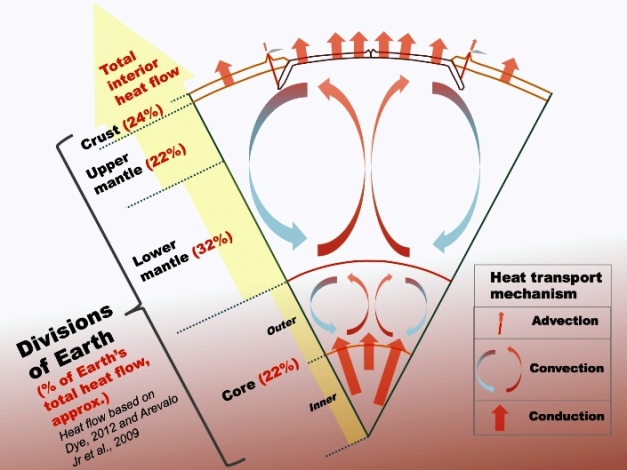 Diagram of interior heat flow of the earth https://en.wikipedia.org/wiki/Earth%27s_internal_heat_budget

This is where volcanoes come in, for they are places where interior heat is transferred from places that are very hot to places where they aren’t.  Operative fluids for volcanoes on this planet include but are not limited to rock (various magmas), gasses and water (geysers and hydrothermal vents).  In my mind, volcanoes are not strictly heat engines on the earth, as whatever is erupted is not recycled on a timescale exceeding tens to hundreds of millions of years.  Indeed, a case can be made that whatever comes out of volcanoes are not really recycled if for no other reason than the continents seem to get larger over geologic time.

So what do I want to talk about? 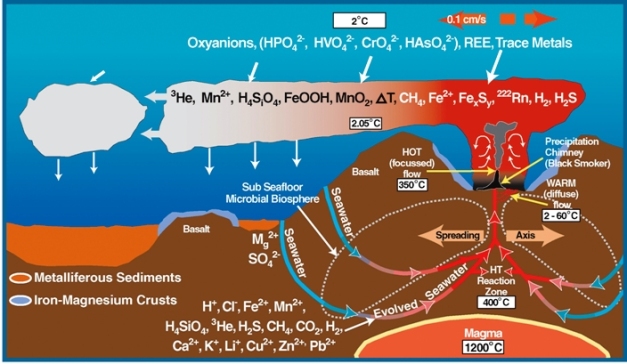 I said all that to talk about this.

If we assume volcanoes and other thermally-driven systems here on earth are natural ways to transfer heat from the interior to the exterior or places of higher heat to places of lower heat, we would expect to see similar systems across the solar system.  And indeed we do, with a few caveats.

So let’s take a look at solid bodies across the solar system and see if we can find a few volcanoes.

The smallest planet is Mercury. It is the closest to the sun and is the hottest place in the system.  Interestingly enough, there is ice thought to be in shaded regions at one of the poles.  Mercury shows signs of tectonic activity thought to be due to shrinkage as it cooled.  The Messenger probe orbited Mercury from 2011 – 2015.  It mapped most of the planet.  It discovered what is thought to be 51 pyroclastic sites on the surface.  90% of those were in craters.  This means that the interior retained its volatiles much longer than originally thought.  There are also lava flows.  http://www.space.com/25501-mercury-volcanoes-nasa-messenger-spacecraft.html

Venus is earth’s twin with the exception that it has a thick carbon dioxide atmosphere.  The physical phase diagrams put the pressure and temperature at the surface near or at the point where the atmosphere becomes a supercritical liquid at 91 atmospheres and 864 F at the surface.  With the surface that hot, there is substantially less difference between interior and exterior temperatures on Venus, so lava appears to flow freely.  There are a significant number of volcanoes on the surface.  There is some speculation that the entire planet was resurfaced sometime in the last 500 million years due to the lack of large impact craters.  Venus has been mapped via radar from orbit.  There have been periodic injections of SO2 into the atmosphere leading to some speculation that there are currently active volcanoes.  There is no noticeable tectonic plate activity on Venus.  http://nineplanets.org/venus.html

Terrain thought to be from a relatively recent lunar volcanic eruption http://www.sciencemag.org/news/2014/10/recent-volcanic-eruptions-moon

The earth’s moon is thought to be the product of a massive collision between the earth and a Mars-sized proto planet.  The debris formed a ring that quickly consolidated into a close, tidally locked moon.  The moon is also two-faced, with a thin crust facing earth and a much thicker crust on the far side.  Following the Late Heavy Bombardment a half a billion years or so after its formation, lava flows filled up the massive craters on the near side.  These flood basalts formed domes, lava tubes, and cracks as they cooled.  There are suspected pyroclastic deposits which indicate that lunar basalts had an unexpectedly large amount of water.  There are no plate tectonics on the moon.  http://www.lpi.usra.edu/meetings/sssr2011/pdf/5011.pdf

Mars is about a quarter of the size of earth and does not appear to have enough time to active generate plate tectonics.  It does have several tectonic structures.  The first is Valles Marinaris, a massive fault system that is thought to be a prototype / beginning of a plate tectonics system.  The two sides moved for at least a little while before the underlying mantle cooled sufficiently to halt the movement.  The second structure is the Tharsis Ridge, a massive area of volcanoes, lava flows, lava tubes and similar deposits.  Magma supply for Tharsis is suspected to be a mantle plume or hot spot.  Tharsis also hosts the largest known volcano in the solar system – Olympus Mons.  http://newsroom.ucla.edu/releases/ucla-scientist-discovers-plate-237303

Io is the innermost of Jupiter’s Galilean Moons.  It is tidally flexed between Jupiter and the three other Galilean moons farther out.  It is the most active volcanic body in the solar system.  Active fluid is silicate rock (basalt?) mixed with some molten sulphur.  The tidal flexion along with the remaining heat of formation drives its constant volcanic activity.  There is thought to be a subsurface magma ocean.  All typical eruptive patterns are observed from effusive to explosive.  The explosive eruptions reach some 500 km from the surface.  http://solarsystem.nasa.gov/planets/io/indepth

Europa is the second of the Galilean Moons.  This one is covered with a liquid water ocean capped with a shell of floating ice.  Like Io, tidal flexion keeps the many tens of kilometers deep ocean liquid.  Like earth, the bottom of this ocean may very well have a series of hydrothermal vents that transfer interior heat to the surrounding ocean.  Europa is thought to be one of the more promising places to hunt for life in the solar system.  http://solarsystem.nasa.gov/planets/europa/indepth

Titan is the largest of Saturn’s moons.  It has a thick atmosphere and hosts lakes of ethane and methane.  The Cassini probe has made multiple fly-bys since 2004.  It carried the Huygens probe which landed on Titan and transmitted some very earthlike photos from the surface.  Over the last decade, several structures on Titan have been identified which look an awful lot like shield volcanoes.  These would erupt some combination of water, ammonia and methane which would have a much lower freezing point than pure water.  Titan is also thought to host a subsurface ocean which would be a transfer mechanism for interior heat.  http://www.space.com/10486-ice-volcano-saturn-moon-titan.html

Geysers of Enceladus via Cassini http://www.universetoday.com/48796/enceladus/

Enceladus is one of the more surprising bodies in the entire solar system.  It is around 500 km in diameter, much too small to have retained its heat should it have been formed when Saturn was formed.  Yet it appears to host a continual region of geysers that erupt salt water from what is thought to be a subsurface ocean.  Once again, heat transfer from the interior to the exterior is conducted by eruptive methods.  Heat generation is currently unknown, though tidal flexing is one of the more likely sources.

Triton is the largest moon of Neptune.  It is thought to be a captured Kuiper Belt Object.  Voyager 2 did a flyby in August 1989 and found active volcanism or geysers on Triton.  It appeared to be erupting nitrogen gas laced with dark particle to an altitude of 8 km.  Like Enceladus, this was a complete surprise.  http://www.space.com/22223-triton-moon.html

Possible cryovolcano on Pluto. Volcano is the upper left hand part of the photo http://www.theverge.com/2015/12/17/10438126/pluto-high-resolution-images-ice-volcano

The New Horizons probe flew by Pluto last summer, giving the first (and last for a while) close in photos of the surface.  Rather than finding a dead, frigid world.  It found a frigid world that was surprisingly active on a geologic scale.  There are two structures identified that look a lot like large shield volcanoes.  There also appears to be some sort of tectonic activity on both Pluto and its largest moon, Charon.  http://www.nasa.gov/feature/possible-ice-volcano-on-pluto-has-the-wright-stuff

There are two other moons that demonstrate some sort of tectonic activity.  The first is Saturn’s moon Iapetus.  It is ringed with a wall of mountains at its equator 20 km tall and 200 km wide making it look a bit like a walnut.  Uranus’ moon Miranda also exhibits a mishmash of tectonic structures.  Initial speculation was that it was shattered in a collision and then reassembled poorly.  More recent speculation has the structures as tectonic driven forms. 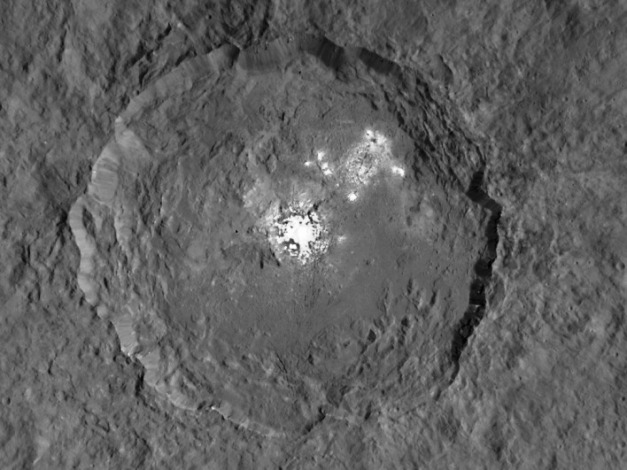 We have visited two of the largest asteroids (now called dwarf planets) over the last few years.  The first, Vesta has been battered and shows no active evidence of volcanic action.  But its interior does show differentiation, meaning that for some period of time after its formation, the interior was hot and would have had to dump its excess heat on the exterior somehow.  http://onlinelibrary.wiley.com/doi/10.1029/2012GL052959/full

The second, and largest Ceres is a completely different beast, as it does not appear to have formed in its current location.  It has a much larger percentage of ice beneath its surface and has multiple bright areas that may be salt or ices exposed to space.  http://www.skyandtelescope.com/astronomy-news/bright-spots-on-ceres-mystery-solved-121020158/

Comets have been long known to have jets which erupt from the surface when the interior is heated sufficiently.  This is a sort of a reverse volcanic action, as the eruptions keep the interior cool transferring the excess heat off the body.  http://rosetta.jpl.nasa.gov/news/fine-structure-activity-jets-67p/c-g

Volcanoes and volcanic activity look to be a natural system on nearly every body we see throughout the solar system.  As long as there is excess heat to dump and a solid surface of some sort, we will see volcanic activity.  Eruptive materials range from rock to water to nitrogen depending on temperature.  As most of our experience with volcanism is silicate rock, much colder volcanic activity using water, ammonia, nitrogen and methane as the eruptive materials surprises us.  We have much to learn about the behaviors of various ices in the outer solar system.  Our interest in earth volcanoes has applications off planet also.  You only need to look.

10 comments on “Volcanoes as heat engines”