Great Sitkin volcano is an island in the Andreanof Islands of the Western Aleutian Islands of Alaska. The island itself is 160 km2. It is rugged, with few good harbors, no trees and is uninhabited. The volcano itself is 1,740 m high. It lies some 1,877 km SW Anchorage. The island is surrounded by cliffs that look much like the cliffs surrounding parts of the Hawaiian Islands. Formation of the cliffs were likely the same reason, collapse of portions of the edifice into the sea.

Closest volcanoes to Great Sitkin are Kasatochi to the east and Mount Adagdak to the west. Closest inhabitants are Adak some 42 km SW and Atka some 131 km NE. Population of both villages is 326 and 66 people respectively.

The upper portions of the island are scoured with glacial carved valleys, though glaciers are no longer present on the island. The island is entirely snow-covered during the winter and retains patchy snow during the summer. Overall climate is cool to cold and wet.

Great Sitkin volcano is a composite andesitic stratovolcano making up the majority of Great Sitkin Island. The summit is a composite cone topped with a caldera about a kilometer in diameter. In turn, the caldera is mostly filled with a dome formed during the last eruption in 1974.

The modern edifice occupies a caldera structure thought to have formed via a flank collapse northward more than 10,000 years ago. Sonar data indicates irregular, hummocky topography on the sea floor extending some 30 km north of the volcano. The irregular area has not been sampled and covers some 900 km2 of sea floor. Interestingly, the collapse field is not accompanied with thick sheets of pyroclastic materials on the island, leading the USGS Hazard Assessment to suggest that the flank collapse was not an eruptive event.Rather they suggest it was more like what we see on the Hawaiian and Vanuatu islands.

Construction of the ancestral volcano was complete by the end of the last ice age glaciation as it carries deep glacial scars. The ancestral shield volcano is built by layers of basalt lava flows and tephra deposits.

Some of the oldest deposits on the island date back to the Eocene Late Tertiary older than 33 MY ago.

Great Sitkin has erupted explosively many times over the last 9,000 years. Many deposits of pumice-rich lapilli tephra have been measured on many parts of the island. The deposits were accompanied with explosive bursts, extensive ash fallout, localized pyroclastic flows, lahars and lava flows following the explosive portions of the eruptions. At least eight such events have been observed, the last within the past 500 years.

Great Sitkin from Adak. Note the lack of beaches. http://www.walkingwildshores.com/gallery.htm

There are also deposits of stratified, thin-bedded volcanic ash layers from smaller eruptions. Though it is unclear that all of these came from Great Sitkin or neighboring volcanoes such as Kanga, Tanaga, Mt. Moffett and Kasatochi.

There are also the remains of older basalt lava flows further down the flanks of the newer and older edifices. The Smithsonian GVP writes that much of the island is covered by up to six meters of grey to black volcanic ash (lapilli).

At least 11 smaller eruptions have been observed since the island was discovered in 1760. Most of the earlier ones were described as some sort of activity, fuming, or small / minor explosive eruptions. The two of the most recent eruptions in 1945 and 1974 formed domes within the summit crater. It appears the 1974 eruptions destroyed and replaced the dome emplaced in 1945. Both eruptions were classed as VEI 2. The current dome is about a half a kilometer in diameter. 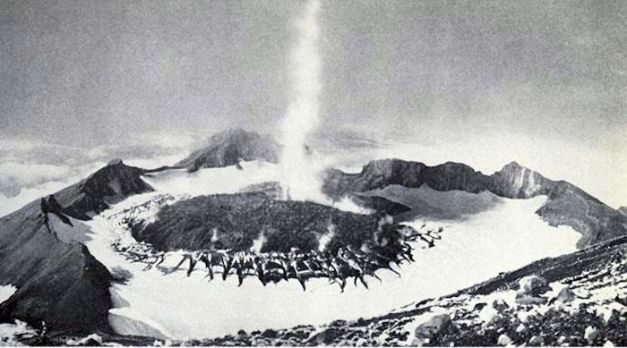 May 27 – 28, 2002 recorded anomalous seismicity. There were two periods of seismic tremor on 27 May lasting 20 and 55 minutes. There were two earthquake swarms on May 28. Both started with relatively large earthquake events 2.2 ML and 4.3 ML and were followed with tens to hundreds of aftershocks. Aftershocks declined significantly over the night as the volcano returned to historic levels of activity. There were no surface signs of activity during or after the episodes.

It is difficult to observe Great Sitkin over an extended period of time due to local weather which regularly puts cloud bases at sea level up to nearly a kilometer up the height of the volcano. 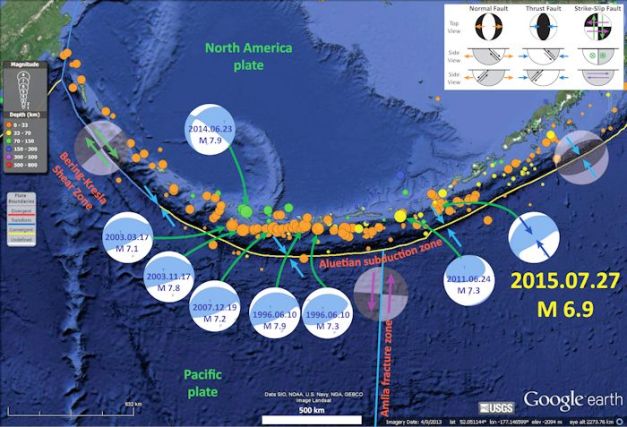 Great Sitkin is a subduction driven volcano as the Pacific Plate dives under the North American Plate. The Aleutian Trench is south of the islands. The Alaska – Aleutian Trench stretches some 3,800 km from the Gulf of Alaska westward to a triple junction in Kamchatka. The trench is curved, which changes convergence rates between the two plates. These rates vary from 6.2 cm/yr in Southern Alaska to 7.2 cm/yr in the central Aleutians. As you go west, the movement along the fault line becomes transverse until it reaches the Kamchatka triple junction.

The plate boundary has been fairly stable for at least 43 MY and the absolute plate motion has not varied significantly for the last 47 MY.

One of the significant things about this portion of the Aleutians is the prevalence of massive Great Earthquakes. Five of the ten largest earthquakes ever recorded took place in the Kamchatka – Kuril / Alaska – Aleutian subduction zones. The most recent of these was Alaska’s Good Friday earthquake in 1964 M9.2. These earthquakes also bring with them associated tsunamis.

Great Sitkin volcano is an example of large, active Aleutian islands. It has demonstrated caldera formation, significant explosive eruptions and at least one flank collapse during its rather extended lifetime. Given the tremor events in 2002, it should neither be considered dormant or safe.

Michael Don in the comments below prompted me to revisit the dating of the Sand Bay Volcanics as Eocene.  As it turns out the reference came from a paper on the longevity of the Aleutian trench rather than Great Sitkin Island.  The actual term used by USGS was “Late Tertiary” which may be as recent as 1.8 MY, far more believable for a volcanic island on a subduction arc. Cheers –

6 comments on “Great Sitkin – flank collapse in the Aleutians”