Mount Unzen from the west. Looking over Fugen-dake dome toward the east. http://рчц-дфо.рф/unzen-japan.php

Mount Unzen in southern Japan is an andesitic basalt dome complex occupying the remains of a caldera on the Shimabara Peninsula 40 km east of Nagasaki, Nagasaki Prefecture, Kyushu Japan.  Depending on your sources, Unzen is described as several overlapping stratovolcanoes, 3-4 domes, or a dome complex.  I believe the latter is the most accurate description.

Unzen is also an incredibly dangerous volcano, partly by its close proximity to large cities.  Shimabara City sits on its flanks.  There are over 76,000 within 10 km of Unzen and 7.3 million within 100 km. 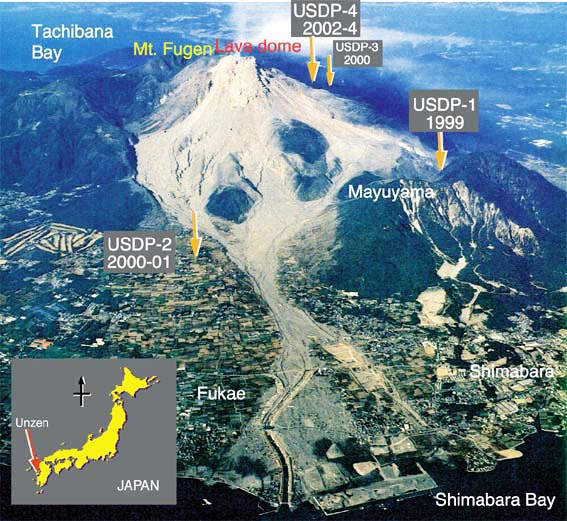 Location of Shimabara City in close proximity to Unzen. http://hazards.umwblogs.org/2013/04/21/case-study-summary_james/

The volcano has been particularly deadly, with a 1792 dome collapse / debris avalanche eastward into Shimabara Bay that killed nearly 15,000, the deadliest volcanic related disaster in recorded Japanese history.  It killed 43 including volcanologists Kraffts in 1991 with an unexpectedly vigorous pyroclastic flow and surge.

The volcano is some 1,483 m high and has a volume on the order of 35 km3. The most recent activity ended in 1995 with the completion of a new dome. 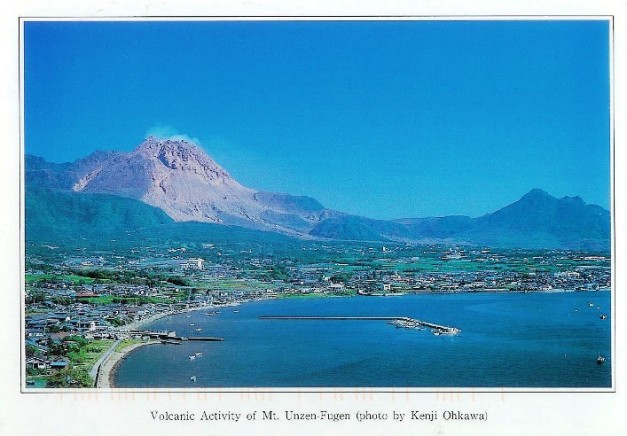 Unzen is monitored by the Shimabara Earthquake and Volcano Observatory:  http://www.wovo.org/0802_10.html

Weather in the area is a humid subtropical climate with mild winters and long, hot humid summers.  Nagasaki 40 km west is one of the wettest sizable cities in Japan.  The winter is drier and sunnier with a bit of snow from time to time.  The significant moisture means that the volcano is normally covered with greenery between times of activity. 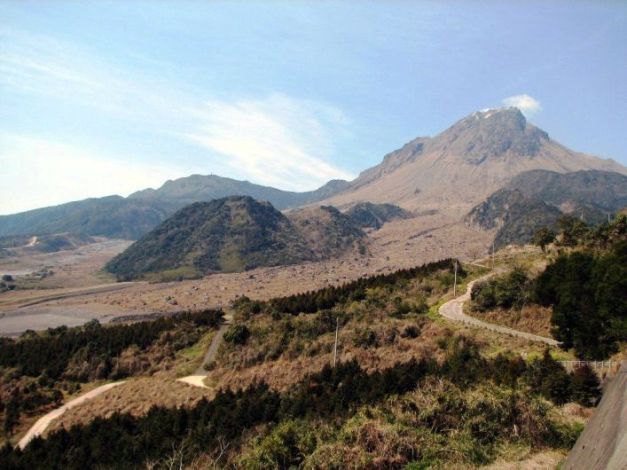 Volcanism in the region dates back to at least 6 Ma with extensive activity over the last 2 Ma.  Activity has migrated slowly north over time.  The ancestral cone was built over the course of 200 ka.  Later eruptions filled the graben with blocky andesite lava flows and pyroclastic flows.  These changed to dacitic pyroclastic flows and tephras between 500 – 400 ka.  The next 100 ka had extensive pyroclastic and lahar activity followed by phreatomagmatic activity which indicates rapid subsidence of the graben the volcano was built within.

A major collapse to the east and south some 20 ka formed the Myoken caldera that encloses the dome complex to the north and west.  The lack of large quantities of pyroclastic materials lead to the conclusion that dome growth was rapid and largely effusive in nature.  The domes have suffered numerous collapses which in turn generate no small number of smaller pyroclastic flows.  I have found nothing to indicate the dome collapses or the flank collapse some 20 ka was a directed blast like Mount St. Helens or Bezymianny.

The volcano itself erupts dacite, andesite and basaltic andesites.

Volcanic history of the Shimabara peninsula suggests two stages – pre-Unzen (4 Ma – 500 ka) and Unzen (500 ka – present).  Magmas in the earlier stage are basalts, andesite lava flows and pyroclasts.  Pre-Unzen basalts evolved from different primary magmas from the same mantle source.  Unzen magmas are more evolved than the Pre-Unzen basalts and suggest a continuous basalt supply throughout the history of the peninsula.

There are also four geothermal systems on the Shimabara Peninsula, one of which locate some 8 km below the surface thought to be the magma body.  The other three systems are fumarole and hot springs fields.

The Smithsonian GVP has identified at least 13 eruptive episodes over the last 6,000 years.  None is larger than a VEI 2.  The six eruptions before 1150 BC are poorly constrained in magnitude and date.  There are two possible eruptions between 860 AD and 1657 AD that are either discredited or uncertain, interesting given the amount of time people have lived in Japan.  Most of the activity has been concentrated from the Fugen-dake and Mayu-dake domes.

There are four VEI 2 eruptive periods since 1663 AD, a VEI 1 and a pair of uncertain events. 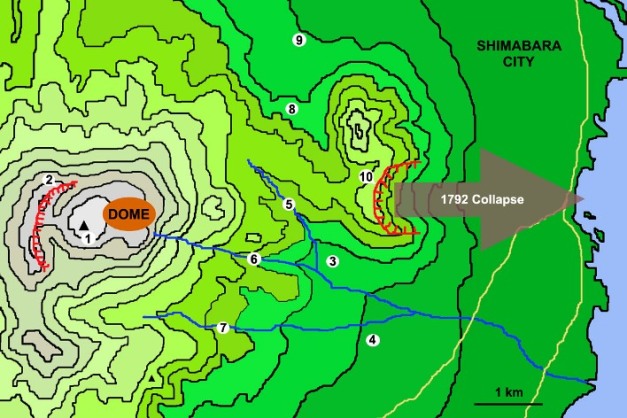 Map of dome collapse creating 1792 landslide and tsunami. Image courtesy PhotoVolcanica. Note that PhotoVolcanica has an outstanding writeup of Unzen and the 1991 – 1995 series of eruptions. http://www.photovolcanica.com/VolcanoInfo/Unzen/Unzen.html

Wave height were 10 – 20 m.  One location measured wave height at 57 m due to focusing of the energy.  Shimabara was doubly hit, not only getting the outbound landslide through town, but hit by the returning wave energy as it bounced off the opposite side of the bay.

Typical runout of these flows were 5.5 km from the dome.  On June 3, 1991, one of the pyroclastic flows killed 43 including volcanologists Maurice and Katia Krafft and a number of photographers.   To be fair, prior to this flow, runouts were in the vicinity of 3 km for the previous week.  This particular surge extended to over 4 km, engulfing the group.  The group chose an elevated location some 40 m above the river valley below which ended up not being sufficient altitude to protect them.

Video of the event can be found here.  Note that the beginning of the video was from a different collapse as the dome was shrouded by clouds at the beginning:

Weather also played a factor here, as the top of the volcano was shrouded in clouds and the group did not see the collapse or the flow until it emerged from the clouds aimed at the group.  Video of this flow is one of the more terrifying volcanic videos I have ever seen.

Finally, there were some attempts to second-guess the decision to observe from such a close location.  The Krafft’s chose a location that was in the “Recommended” (meaning not recommended) area and not in the Restricted Zone. 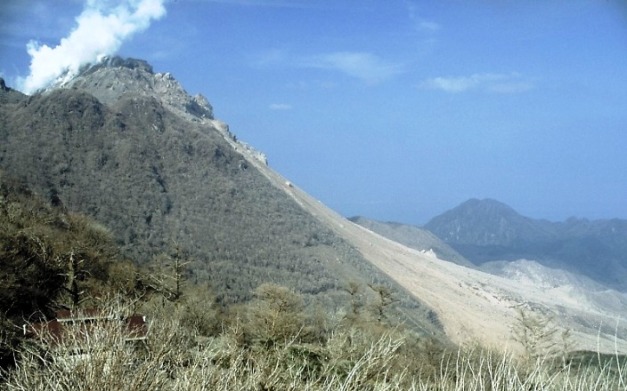 The last active period was a VEI 2 set of eruptions from Fugen-dake between Feb – May 1996. 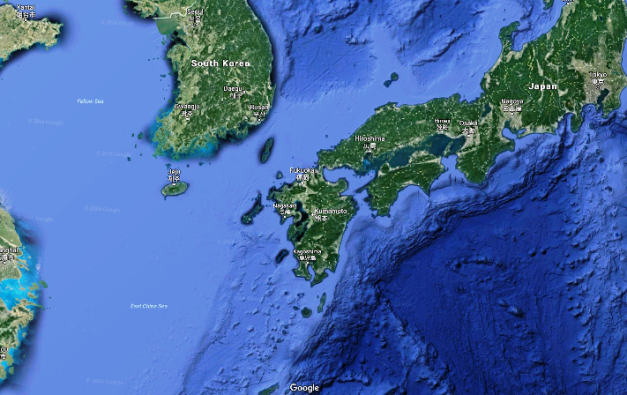 Unzen is a subduction driven volcano.  Crustal thickness under it is some 25 km.  It occupies a 30 – 40 km long E – W graben bisecting the peninsula.  Unzen is located in the Central Volcanic Region of Kyushu.

The massive Aso caldera occupies the same graben, some 100 km east of Unzen.  This graben hosts at least five volcanic centers in addition to the Aso caldera.  Aso was responsible for some 800 km3 DRE of magma erupted over the last 300ka.

To the south of this graben, there is a second graben, more north-south in orientation, that hosts (listed from north to south):  the Kakuto, Wakamiko, Aira, Ata and the Kikai calderas.  Kikai is offshore to the south.  These other calderas were also active over the last 300 ka, producing around 800 km3 DRE of magma.  The Aira caldera is some 250 km to the south of Unzen.

Volcanism on Kyushu is driven by the subduction of the Philippine Sea Plate under the Amur plate at the current rate of 72 mm / yr.

Tectonics of Kyushu over the last 15 Ma is driven by the changing nature of subduction of the Philippine Sea Plate under the Amur Plate.  As of 15 Ma, back arc rifting in the Sea of Japan and the spreading of the Shikoku Basin had stopped.  The Philippine Sea Plate is subducting the Kyushu Palau Ridge into the Nankai Trough and in turn under the northern part of Kyushu at this time.

There appears to have been a stagnant period of subduction either 10 – 6 Ma or 14 – 8 Ma.  Such a halt is supported by a change in erupted lavas during the time.

Subduction began anew around 6 Ma along with a change in direction, moving the Philippine Sea Plate in a NNW direction.  Along this same time, back arc rifting began in the Okinawa Trough which stretches SW along the line of the Central Kyushu graben / Central Volcanic Region.  Southern Kyushu appears to have rotated about 30 degrees CCW.  There is also extensional deformation of southern Kyushu since that time.  Volcanism has generally migrated from north to south during the period, starting offshore NW of Kyushu and migrating SE over time.  As a final addition to the festivities, there is evidence of slab rollback underneath Kyushu along with the creation of significant amounts of hot, eruptible basalts.

Over the last 2 Ma, the position of the subducting Kyushu Palau Ridge has migrated SW, opposite to the previous direction.  There may also have been a decrease in extensional deformation in central Kyushu.  The change in plate migration appears to have slowed down magma production which would have been expected in a slab rollback, extensional regime. 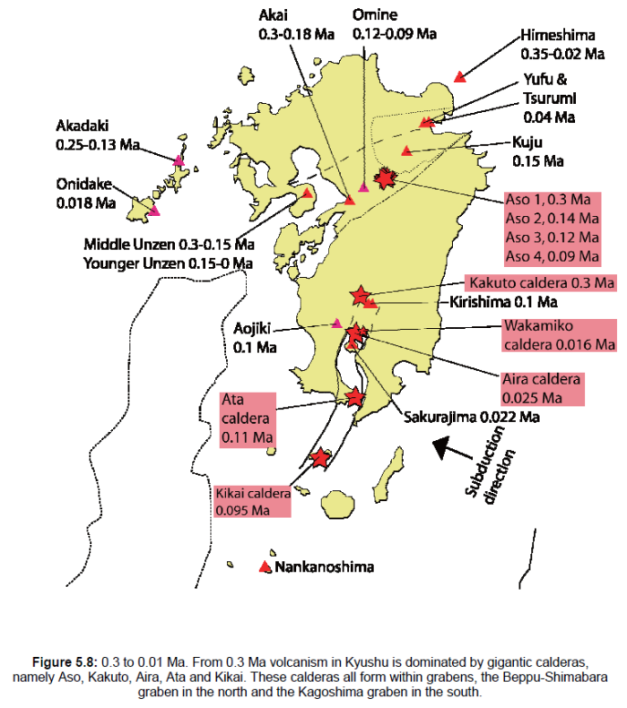 Caldera outbreak on Kyushu over the last 300 Ka. Screen capture from Volcanic History of Kyushu

“A large number and variety of earthquakes representing every type of faulting occur in Kyushu, reflecting the complex, dynamic active tectonic setting.”

Prior to 2 Ma, most of the volcanic activity was effusive with significant lava fields and andesitic shield volcanoes.  Over the last 1 Ma, activity in the Central and Southern region has shifted to massive pyroclastic ejecting caldera systems.  It also includes a number of stratovolcano systems and dome systems like Unzen.

As the calderas warmed up in central and southern Kyushu, volcanic activity in the NW Region tailed off into monogenetic activity.

The most important thing to note about volcanism in Kyushu is the stunning complexity and variability over a relatively short period of geologic time.  As tectonic activity continues to stretch, rift, rotate and otherwise manipulate the shape of the island, I remain concerned about the relatively recent (last million years) caldera outbreak on and to the south of the island.  Unzen sits in a graben caused by the spreading center that is the Okinawa Trough which is in turn underlain by what appears to be a slab rollback.  We have a subducting plate in the Philippine Sea Plate that changes direction.  We have a chain of seamounts subducting under the island not unlike what is going on with the Emperor Sea Mounts under Kamchatka.  There appears to be plenty of magma supplied to continue to fuel volcanic activity for the foreseeable future, making it a very dangerous location populated by millions of Japanese.

Unzen collapse and debris flow field from the east. Shimabara City is in the foreground to the right. http://earthquake-report.com/2010/12/08/deadly-earthquakes-of-december-7-japan-2x-bulgaria-and-armenia-killing-totally-26280-people/