Mount Ararat (Agri Dagi) is located in the far eastern part of Turkey, Armenia, near the border of Iran.  It is the mythical resting place of Noah’s Ark, as mentioned in the Book of Genesis.  Ararat was the first mountain poking above the flood waters as they receded following the Great Flood.  It is revered by both Armenians and Christians.

Mount Ararat also is a massive stratovolcano massif active as recently as 1840.  It consists of two cones, Greater Ararat which tops out over 5,100 m, and Lesser Ararat at nearly 3,900 m.  The total massif is 40 km in diameter.  Just over 1,200 people live within 10 km of the volcano.  2.8 million live within 100 km of the volcanoes  (Yerevan, Armenia).

Political map of eastern Turkey, Armenia and surrounding national borders drawn from the perspective of the Armenians. https://aratta.wordpress.com/armenia-map/

The location is in one of the hotter political spots in the world – the border intersection separating Turkey, Iran, Georgia and Azerbaijan.  Syria and Iraq are not all that far away to the south.  Eastern Turkey is also particularly bloody with separatist movements by both the Kurds to the south and Armenians in the center to the north.  Military conflicts have been particularly bloody and brutal over the last century and a half, particularly in western Armenia which is now part of Turkey.

Mount Ararat was central to pre-Christian Armenian mythology.  Its symbol is used widely by Armenians to represent their culture.  When the Soviet Union was in charge, Ararat was represented in the seal of the Armenian Soviet Socialist Republic 1920 – 1991.  The Genesis flood narrative was linked the Armenian myth of origin by historian Movses Khorenatsi around 450 AD.  It is revered as the holy mountain and home of the gods.  The early mythology was lost with the rise of Christianity.  Armenians are described in places as people of Ararat.  Armenia itself is centered on Ararat out to a 320 km radius. 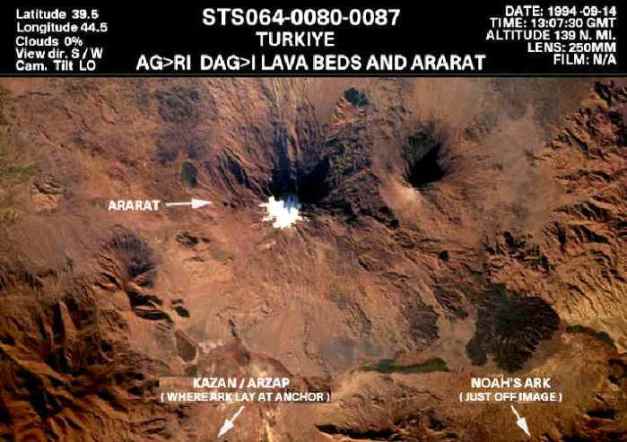 Biblical mentions of Ararat start in the Fourth Chapter of Genesis, which describes the landing place of Noah’s Ark on “the mountains of Ararat.”  While there is no small dispute what this phrase precisely means, it has triggered modern searches using current tools for the remains of a large wooden boat in and under the icecap covering the mountain.  An alternate definition of the mountains of Ararat include all mountains of greater Armenia.

The association with the Genesis Flood and this part of the world is particularly interesting, at least to me.  Some have tied that flood to the catastrophic filling of the Black Sea basin around 5500 BC.  The Gilgamesh flood took place around 2700 BC.  The Younger Dryas guys postulate an impact event in the Indian Ocean creating Burckle Crater, about 30 km in diameter around 2800 BC as a potential cause of massive regional flooding and in turn the similar myths in Mesopotamia and surrounds. Water at the crater site is deep at 3,800 m.  The flooding would not entirely be caused by the impact tsunamis.  When a large body impacts the earth, it throws perhaps ten times the impacting mass out of the crater.  In the case of Burckle, a lot of this would have included the 4,000 m of sea water covering the crater, creating torrential rains for weeks to months after the event (40 days and 40 nights anyone?).

Location of Burckle Crater and tsunami markers (chevrons) on Madagascar and Australia. The tsunami would have rolled up the Persian Gulf, thru Mesopotamia and well into Iraq and southern Turkey. http://sacredgeometryinternational.com/cosmic-lessons-burckle-crater-megatsunamis-part-1

Today, the region surrounding Mount Ararat is a basin nearly 1,000 m above sea level.  Nearly three million people live within 100 km of the volcanoes.  Climate is described as cold semi-arid with long, hot dry summers and cold, snowy winters.  Annual precipitation is in the neighborhood of 320 mm.

As with Damavand, Ararat is a popular destination for climbers.  Unlike Damavand, it sports a large, permanent ice cap and field of glaciers which in turn supports a significant downhill skiing activity.

Mount Ararat is a polygenic stratovolcano.  It is composed of medium and acidic lava flows, agglomerates and tuffs.  Total volume is in excess of 1,150 km3.

The massif evolved in four phases starting some 1.5 Ma.  The initial construction phase included basaltic lava flows and a series of large pyroclastic eruptions.  These erupted along a generally N-S series of extensional fissures.  The second phase shifted to Greater Ararat, building the base of the edifice.  Erupted materials included andesitic lava flows and dacitic pyroclastic flows.  The climatic phase had extended and basaltic lava flows from the central vent and from fissures along the flanks of the volcano.  This built Greater Ararat above the surrounding edifice.  Construction of Lesser Ararat is thought to have started during this phase.  The final stage of construction built a number of parasitic cones, domes and eruptive fractures on the flanks of the volcano generally along the N-S trending fault system.  This phase also included effusive product, andesitic flows and coulees.

The Greater Ararat Ice Cap covered around 10 km2 in the late 1950s.  This was down to 7 km2 in 2011.  The ice cap supports 11 outlet glaciers.  A number of these glaciers are debris covered at lower elevations.  There are estimates of Pleistocene coverage down to 3,000 m asl which would have covered some 100 km2 of the volcano.  Investigators have not found evidence of glacial deposits low enough on the flanks to support this suggestion. 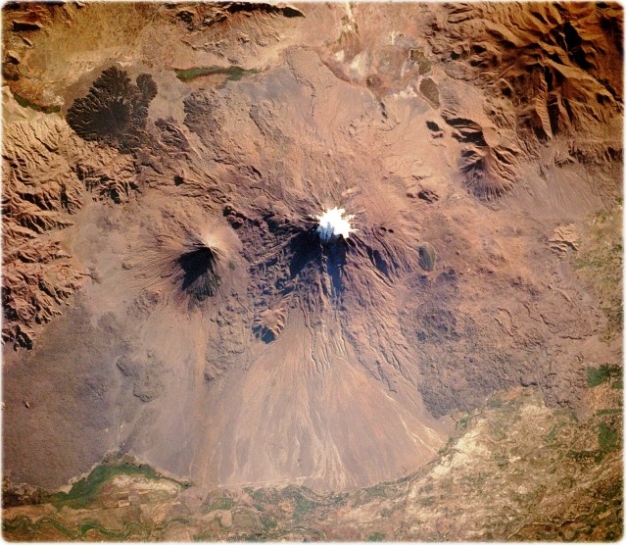 The Turkish government has not been particularly helpful agreeing to requests to scientifically research Ararat and its surrounding area.  As a result, this volcano is not as well studied as perhaps it should be.

Volcanic threats should include flank collapses, debris avalanches, pyroclastic flows and lahars.  The region is an active earthquake fault and a large earthquake was connected to the last eruption.

While there is not a lot of information on an active hydrothermal / fumarole system on Ararat, such a system has shown up in satellite IR photograph.

The 1840 eruption was classed as a VEI 3.  It has variously been described as initially phreatic in nature finishing as it laid down a pyroclastic deposit on the upper northern flank.  It was also accompanied with a 7.4 magnitude earthquake and landslide.  Several large villages were destroyed during the event which killed up to 10,000 people.  The earthquake created a 74 km long fracture from the summit.  A debris flow reportedly reached a village.

This is the oddest thing I came across doing this post. Photoshopped eruption of Ararat. Have no idea where this comes from or why. It showed up in several searches. There are no known photos of Ararat in eruption that I have been able to find. And this wouldn’t have been the 1840 eruption as the photo is in color and appears to have been taken from an airborne platform. https://www.pinterest.com/pin/440719513506988825/

One of the oddities I came across putting this together are what appear to be photoshopped color photos of Mount Ararat Eruption.  They do not look old enough to capture the 1840 eruption.

Schematic of general tectonics of Turkey and the Anatolian Plate. http://csegrecorder.com/articles/view/izmit-turkey-earthquake-august-1999

Turkey is a complex tectonic region.  The western two thirds of the nation is on top of the Anatolian Plate, being forced westward by the collision of the Arabian and the Eurasian Plates.  The far western edge of the plate is a subduction zone called the Hellenic Arc west of southern Greece and south of Crete in southern Agean Sea.  Motion along the Anatolian Plate in Turkey is bound by a pair of strike-slip faults.  The motion is similar to squeezing watermelon or gourd seed between your fingers.

The movement of the Arabian and African Plates north finally closed the ancient Tethys Sea some 10 Ma.  Motion of this impact was initially subduction but shifted as the continental blocks impacted one another.  The northern portion of the Arabian Plate separated after subducting and the region no longer behaves as a subduction zone.

Schematic of tectonic blocks and fault lines in Turkey. http://specialpapers.gsapubs.org/content/409/417/F1.expansion.html

As the collision continues, the region east and south of the intersection of the North Anatolian and East Anatolian Faults north of Diyarbakir is a complex grouping of what appear to be crustal blocks, fault lines and suture lines.  There is a small block south of Van.  There is a larger structure to the NE of the Van Block that may not be a block at all but the western portion of the Iran Plate.

There is a line of relatively recent volcanoes defining what may be another area of structural weakness.    Four of these volcanoes stretch along the northern shore of Lake Van (Van Golu).  From SW to NE these include Nemrut Dag, a 9 x 5 km caldera.  Its last eruption was 1441 AD.  Next is Suphan Dag, a complex of domes, pyroclastic cones and maars last active some 10,000 years ago.  Girekol is a stratovolcano center last active in the Holocene.  Final volcano along this line is Tendurek Dag, a stratovolcano last active in 1855.

Volcanoes of eastern Turkey and Armenia. Lake Van is center right with AHLT overwriting it. Red triangles are volcanoes. Along the north shore of Lake Van from left to right we find Nemrut Dag, Suphan Dag, Girekol and Tendurek Dag. Ararat is the fifth volcano along that line. Kars volcano is to the north of the line. Three Armenian volcanoes are located. http://sp.lyellcollection.org/content/340/1/485/F2.expansion

There is a single volcano north of this line called the Kars volcano.  It was last active sometime in the Holocene.

Armenia also hosts at least five volcanoes.  These are generally east of Ararat.  Most are stratovolcanoes.  There are pyroclastic cones, large basaltic flows and other examples of recent volcanic activity.  Most recent eruption in Armenia was 783 AD.  Most of the rest of the activity is 5,000 years ago or older.  These volcanoes represent the end of a line of volcanoes stretching NW from Iran.

Schematic of major earthquakes in Turkey between 1963 – 1999. Does not include the series of major quakes along the North Anatolean Fault over the last 20 years. http://www.grid.unep.ch/index.php?option=com_content&view=article&id=73&Itemid=400&lang=en&project_id=133

Ararat is an intraplate volcano complex.  The crust is greater than 25 km thick underneath the volcanoes.

So what is really going?  I believe the crustal weakness created by the ongoing collision is allowing hot melt to reach the surface. 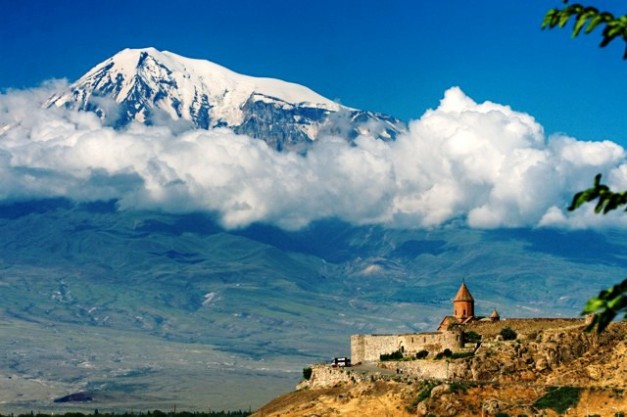 While the magma source for Ararat does not appear to be particularly active at this time, the volcano is huge and surrounded regionally by similarly large volcanic systems, though at somewhat of a distance.  The region is tectonically active with plate, block and platelets sliding and jostling one another over time.  Large earthquakes are common.  The last eruption was 1840 and was deadly to those living nearby.  As with all active stratovolcanoes, this one does not yet show the amphitheater horseshoe of a flank collapse or lateral blast.  It has demonstrated the ability to erupt violently.  Finally, it does not appear to be any more or less active than its neighbors in eastern Turkey and Armenia. 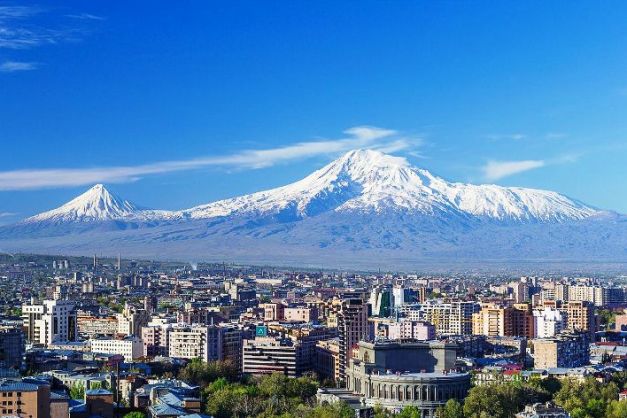