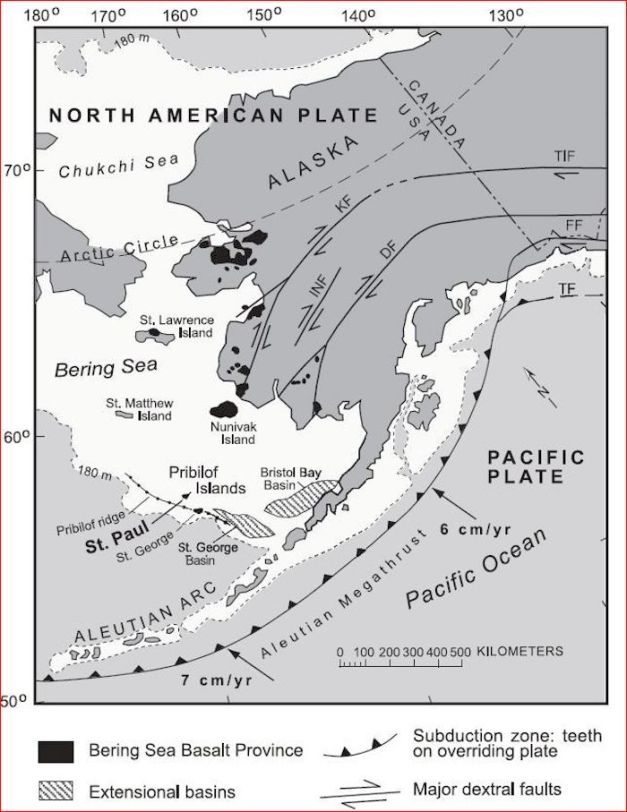 A few years ago, I wrote about three volcanic fields in the Seward Peninsula in far western Alaska.  The post touched on the Bering Block as a possible tectonic player in the region.  Why is it only a possible tectonic player?  It is because the very existence of the block is in dispute.  You can find the post here:  https://volcanocafe.wordpress.com/2014/10/12/seward-peninsula-volcanic-fields/

The region includes much of western Alaska south of the Seward Peninsula.  There are 15 volcanic fields and individual structures associated with the block.

The farthest inhabited location south is the Pribilof Islands.  These are near the southern edge of the Alaskan continental shelf, some 320 km north of Unalaska (Aleutians), 320 km SW of Cape Newenham (Alaska coastline), and some 800 km SE Siberia.  Total population of the islands is 572 as of 2010.  They live on around 200 km of four islands, two of which are inhabited.  Originally the economy centered on harvest of seals.  Today, it is based on commercial and subsistence fishing for snow crab and halibut and support of various government activities.

Nunivak Island is the second largest of the Bering Sea islands.  It is some 50 km offshore the Yukon – Kuskokwim River deltas.  It covers 4,200 km2 and hosts a population of 201 (2000 census) who live in a single village on the north side of the island.  Most of the natives depend on subsistence, commercial fishing, or industrial work on the mainland (mining).  The island is part of the Yukon Delta National Wildlife Refuge. 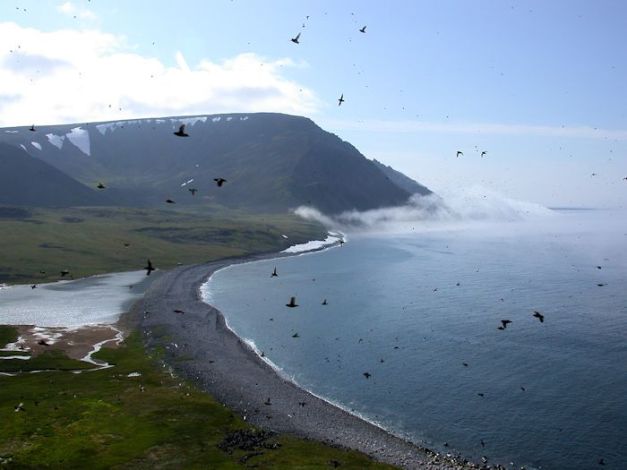 St. Lawrence Island is located just south of the Bering Strait.  It is 58 km east of the Chukchi Peninsula in Russian Siberia, closer to Russia than the Alaskan mainland.  It hosts 1,292 people on a 4,640 km2 island.  The island was a forward base for US military during the Cold War.  Economy for both villages is primarily subsistence hunting of whales, walrus, seals, and fish.

While the region was relatively dicey during the Cold War, things have relaxed considerably since 1990, though it does see irregular visits from Russian jets just like the old days.  There are not a lot of people living in the region.  There is even less infrastructure.  While the volcanic activity is not anywhere close to the explosiveness of Aleutian subduction driven volcanoes, several of the included fields have been quite productive in the not so distant past.

The entire region is called the Bering Sea Volcanic Province.  Activity started some 5 – 6 Ma and continued to recent times.  The activity seems to have shifted south and west over time.  I have not seen anything to suggest this was due to hot spot, rifting, or simple plate (or block) motion over time.  One paper notes that the chemistry of the basalts is similar to that of ocean island basalts which would be hot spot related.  The problem with this is the widespread character of volcanism in the province.

Initial activity started in the Imuruk Lake volcanic field some 5 – 6 Ma.  It produced around 110 km3 of magma, covering 1920 km2 over 845 ka.  Eruptive products were basalts.

The Teller volcanic field started around 3.5 MA and produced nearly 3 km3 of basalts covering 117 km2 over a 310 ka period.  It has three volcanic necks and up to 30 vents. 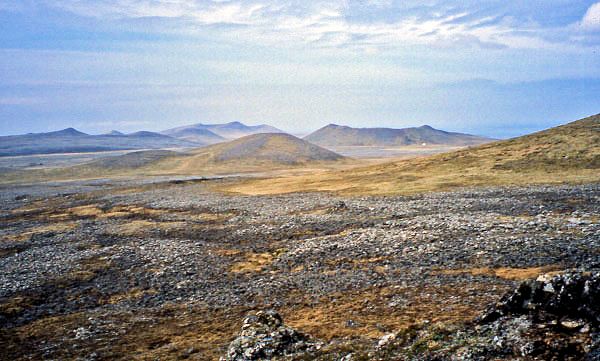 St. Paul Island (Pribilofs) erupted nearly 7 km3 over a 535 ka period starting around 420 ka.  Eruptions continued until 130 ka and covered 115 km2 with various basalts.  The young age of some of these lavas suggests that the island may still be active.

The Kookooligit Mountains on St. Lawrence Islands were prolific with nearly 100 km3 of basalts erupted over 980 ka starting 1.2 Ma.  It consists of basalt cinder cones and lava flows combined to form a large shield volcano some 500 m high.  Activity continued in this single complex for nearly 1 Ma. 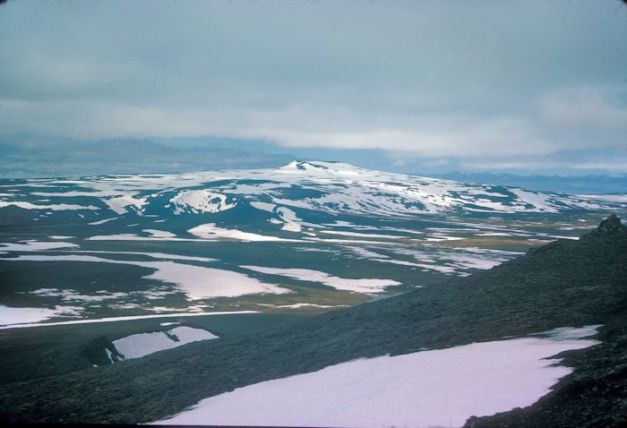 Eruptions on Nunivak Island and the St. Michael volcanic field began some 3 Ma, and produced around 59 and 119 km3 of basalts over a period of some 550 ka.  Nunivak produced volcanic cones, broad lava flows, and maars.

St. Michael covers St. Michael and Stuart Islands, extending inland to the south.  It consists of over 50 cones, craters, maars, and numerous lava flows.  The oldest part of the field is on the mainland.  Peak activity on St. Michael was from 180 – 120 ka.  Local legends suggest continued activity into recent times, as recently as 2000 – 3000 years ago.

Given the remoteness, sparse population, lack of infrastructure, and arctic climate of the region, there is a considerable amount of lavas and cinder cones that have not been precisely dated at this time.  Estimates of most recent activity are within the last few thousand years.  Half of the volume of all the lavas in the province erupted in the last half million years.

There are several other volcanic fields and structures associated with the Bering Block that have not yet been studied or characterized.  These include the Yukon Delta volcanic region, Flat Top Mountain volcano, Togiak volcanic field, Buzzard Creek maars, and the Prindle volcano.

There are some observations that suggest the magmas are evolving over time and that the eruptions are or will be getting more explosive as the magmas crystallize and fractionate over time.

The magmas are not thought to be related to either a plume or a back-arc basin subduction related to the Aleutians.  Rather they are thought to be produced by hydrated upper mantle peridotite at relatively low temperatures that could reach the surface through local faults that served as weak points or conduits for the magmas.

Schematic of impact of Yakutat terrane on SC Alaska http://americastectonics.weebly.com/yakutat-plate.html

The most important part of this region is its location near the western edge of the North American Plate.  The southern portion including the Aleutian islands includes the Bering Block.  The northern and western portion includes the Chukotka – Arctic Block (essentially far eastern Siberia).  And it appears the relative motions of the two blocks define a lot of what is going on in the region.

As we have seen in discussions of another major intra-plate block – the Colorado Plateau – tectonic, volcanic and seismic activity along the boundaries of the block appear to be driven (or controlled) by rotation of the block with respect to the motion of the plate itself.  The Bering Block may or may not be rotating clockwise with respect to the North American Plate, but is most certainly moving south and west a bit.  Whether that is a rotation or an extrusion remains to be seen.

The existence of the Bering Block is inferred based on seismic studies of Alaska.  If the geologists are correct, the southern portion of the state between western Alaska and the Canadian border may actually be quite complex with a number of microplates / blocks jostling against one another to relieve the stress imposed by the collision of the Pacific Plate into the North American Plate.
As a review, motion along Southeast Alaska is primarily strike – slip, as the Pacific Plate moves northward along the Fairweather – Queen Charlotte Fault.  This motion has delivered a number of terranes into southern Alaska, building it up from the south.  The most recent terrane is the Yakutat Block which in some quarters is referred to as the Yakutat microplate.  Part of this terrane is plastered against previously delivered terranes.  Fully half of it has subducted under the North American Plate as a flat plate subduction event.  NE portions of it have also subducted under the North American Plate.

Over the tens of millions of years of ongoing collisions, stress is relieved by the Denali Fault, a semicircular fault line that is primarily strike – slip, stretching from SW Canada to the Yukon – Kuskokwim River delta.  The Denali Fault is one of the major fault structures in North America.
South of the Denali Fault, we find what is described as the Southern Alaska Block, to its west, we find the Bering Block.  Boundaries between the three blocks / microplates are poorly defined.  Total motion across them has been described as delivered terranes (crustal fragments) transported into southern Alaska, rotated through the southcentral region and extruded westward.  This description first showed up in a 2007 paper by Redfield, et al.

The advent of precise GPS motion measurements finally allowed geologists to actually measure what they believe is going on.  GPS measured deforming motion across a 1000 km wide region of central Alaska, far north of the Denali Fault, stretching all the way to the Arctic Ocean.  Motion west of this line is generally southbound, curving westward, with the Bering Block rotating generally clockwise.  Deformation to the east of that line is generally southbound with a region of highly complex deformation in the vicinity of Yakutat that should correspond with the Yakutat Block. 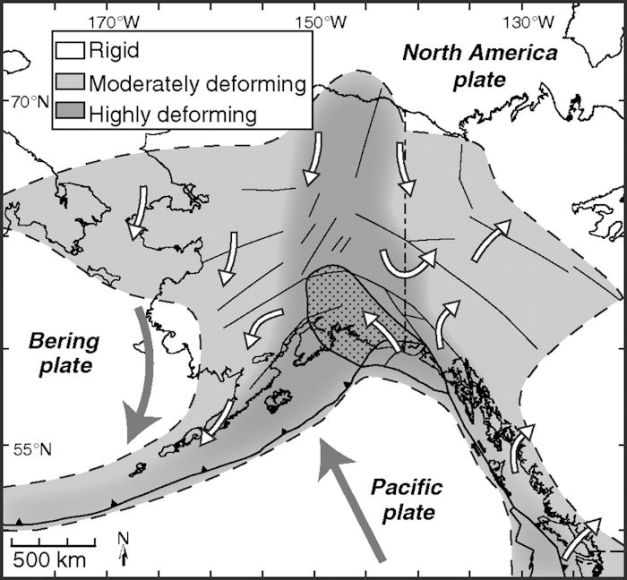 Deformation of the North American Plate through Alaska from Finzel et al. http://geology.gsapubs.org/content/39/9/835.abstract

This particular paper concludes that relative motions between the plates, microplates / blocks are accommodated within the diffusion zone.  Tectonic extrusion toward the Bering Sea region is not taking place.  The relative motion of the plates / blocks may govern the rotation field in southern Alaska and extension in NW Alaska. 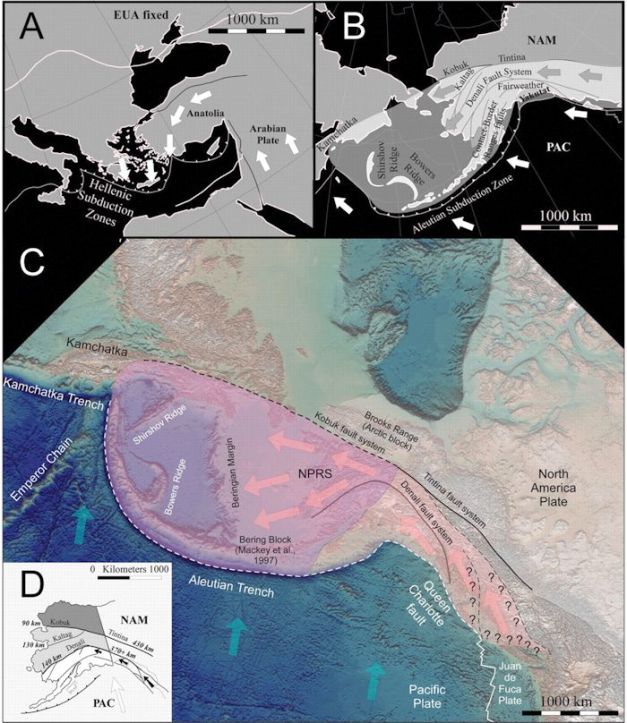 Extrusion of the Bering Block from Redfield et al. http://geology.gsapubs.org/content/35/11/1039/F1.expansion

A competing theory out of UAF presented in 2015 by Freymueller, et al suggests that new analysis of GPS measurements suggests the Bering Block is being extruded SW along the Aleutians while the next block north and west in North America, the Chukotka – Arctic Block (essentially far eastern Siberia) is doing the actual rotation.
Either way, there is a lot of tectonic jostling going on in this portion of the North American Plate.

Magmas appear to be making their way to the surface via a series of major fault lines in western Alaska.  Although none of the depictions I have found so far show the fault lines extending into the Bering Sea, I believe they extend well into the continental shelf area of the Bering.  It is these lines of weakness that magmas have reached the surface, not unlike how they have done in the lines of weakness surrounding the Colorado Plateau or the Anatolian Plate in Turkey.

These faults include the Kaltag fault, Iditarod – Nixon fault, Denali Fault, and the East Kulukat fault.  Displacement along all four fault lines are is generally westbound, adding to speculation that the entire block is being extruded to the west.

You would not think that such a remote region would have such a complex tectonic foundation.  Yet western Alaska does.  Better yet, it behaves a lot like the desert SW US – Arizona, New Mexico, Utah, with prolific intra-plate basalts.  The region is still active, with recent lavas only a few millennia old.  I would not bet against future eruptions in this region.