The 2018 Eruption Sequence at Mayon, Philippines

The current series of eruptions at Mount Mayon began the week of Jan 10, 2018.  There was some precursor activity in Sept 2016 when an increase in SO2 emissions above measured baseline was noted.  Inflation was noted in August along with an earthquake swarm 10 km SE 3 – 6 August that may or may not have been connected with magmatic activity.  Inflation began being measured since Oct – Nov 2017.

The initial event was a phreatic eruption in the afternoon of Jan. 13.  PHIVOLCS raised the Alert Level to 2.  Locals noted Sulphur smells and hard rumbling sounds.  Faint crater incandescence was observed that night.  A second phreatic eruption took place the morning of Jan. 14.  Although weather obscured observations, minor amounts of ash fell on neighboring villages.  SO2 emissions also increased over this week.

New lava dome growth began Jan. 14.  Crater incandescence increased and lava started flowing down the south flank.  There were nearly 160 rockfall events and minor pyroclastic flows out of the crater began Jan. 15.  New dome growth continued with lava flows advancing 2 km down the side of the cone.  Ash plumes and minor pyroclastic flows from dome collapse events continued.  Alert level was raised to 3 on 15 Jan.

The week of Jan 17 – 23 saw additional lava collapse events associated with rockfalls, advancing lava and pyroclastic flows.  Two pyroclastic flows made it 3 km down the slope of the volcano.  The longest lava flow advanced to 3 km.  Strombolian activity began 21 – 22 Jan. with lava fountains 500 – 700 m high.  Ash plumes continued as did lava flows.  The highest ash plume was 5 km.  The fountains and continuing explosions fed incandescent rockfalls around the summit.

By this time, 40,000 people were evacuated and neighboring airports 13 km, 66 km, and 100 km away were closed due to continuing ashfall.  Alert level was also raised to 4.

The British Express – News has live feeds embedded in the following link:  https://www.express.co.uk/news/world/908770/Mayon-volcano-Philippines-eruption-watch-live-webcam-video-update-2018-news

Two live webcams for Mayon can be found here:  http://volcams.malinpebbles.com/pubweb/Indonesia.htm 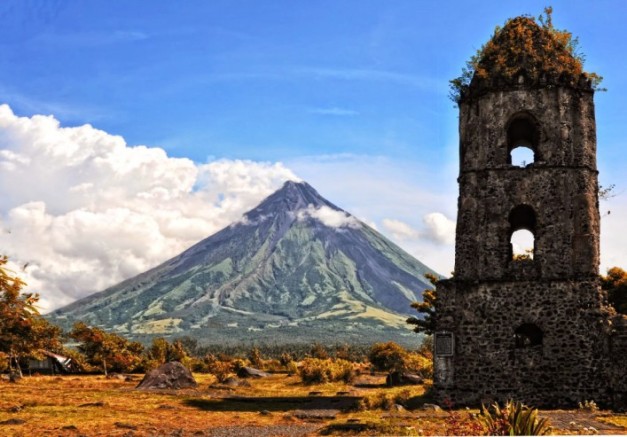 Mount Mayon / Mayon Volcano is one of the most continuously active volcanoes in the Philippines.  It is a symmetrical stratovolcano topping out at 2,462 m.  The upper slopes are steep at 35 – 40 degrees slope.  It was most recently active with a series of eruptions ending in 2014.  It’s base diameter is 20 km.

Mayon erupts andesites, basaltic andesites, and basalts.  It is subduction-driven.  The volcano has a permanent 6 km diameter exclusion zone around it which keeps most people out, though there are nearly 5,000 living within 5 km of the volcano.  There are 1.2 million within 30 km, and 4.1 million within 100 km.  The capital city of Manilla is over a ten hour drive WNW of the volcano.

Threats from Mayon include pyroclastic flows, lahars, tephra falls, lava flows.  So far, I have found no evidence of flank collapse or directed blast from Mount Mayon in the historic past.  Given that it is a very steep, very active stratovolcano subject to violent eruptions, the threat of such an eruption should be considered a possibility. 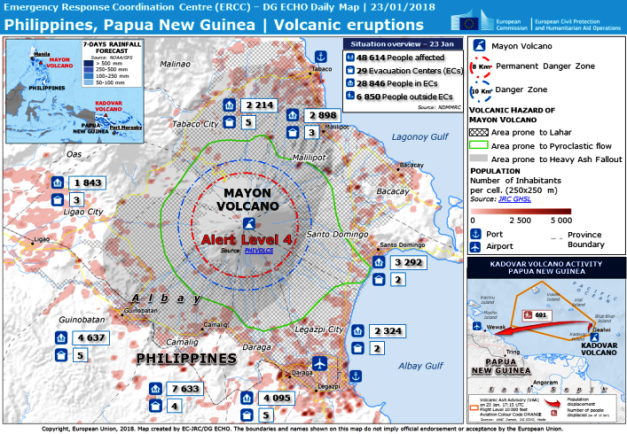 Mayon is surrounded by what is now called the Mayon Volcano Natural Park.  It was first created in 1938.  It was named after a legendary princess – heroine Daragang Magayon.  There are numerous festivals and rituals associated with the volcano and its surrounds.

Mayon is encircled by eight cities and municipalities of Legazpi City, Daraga, Camalig, Guinobatan, Liago City, Tabaco City, Malilpot and Santo Domingo.  The Albay Province is divided into multiple political regions, with eight of them named earlier centered on Mayon like pieces of a pie.  Each city is the region’s governing center.

Climate in the region is generally tropical, with no dry season, though the rainy season brings more rain than other times of the year.  The region is also a regular target for typhoons from the Pacific Ocean to the east.

It is one of the most active volcanoes in the Philippines, with over 50 eruptions in the last 500 years.

The most destructive eruption was a VEI 4 Feb. 1, 1814.  While there was lava, significant ashfall buried at least one neighboring village with over 9 m of tephras.  1,200 locals died during this eruption, making it the deadliest eruption in Mayon’s recorded history.  The Andal, et all paper blames lahars for the majority of death from this eruption.

There was a strong VEI 3 eruption from 1881 – 1882.  This also ejected significant tephras and lava.

In the 20th Century, there were multiple eruptions with varying intensities ranging from VEI 1 – 3.  At least one took place with little to no warning in 1999.  Over the last century a danger zone 6 – 8 km radius was established and enforced by local police and Philippine military.  Evacuations of 75,000 – 20,000 people took place during various eruptive periods.  As the century progressed, continuous improvements were made in instruments to measure, observe and record what the volcano was doing.  This in turn led to improvements in warnings, more timely evacuations, and a decrease in loss of life.

The most recent deadly eruption that I could find was a 2013 phreatic eruption that killed five hikers.  The 2013 event did not give any warning of impending activity.

The last several eruption cycles in 1993, 2001, 2009 – 2010, and 2014 started much the same way as the current activity, leading to some speculation that the current eruption may proceed the same way.  There were a couple smaller events over the last 25 years that were not nearly as large as the listed eruptions. 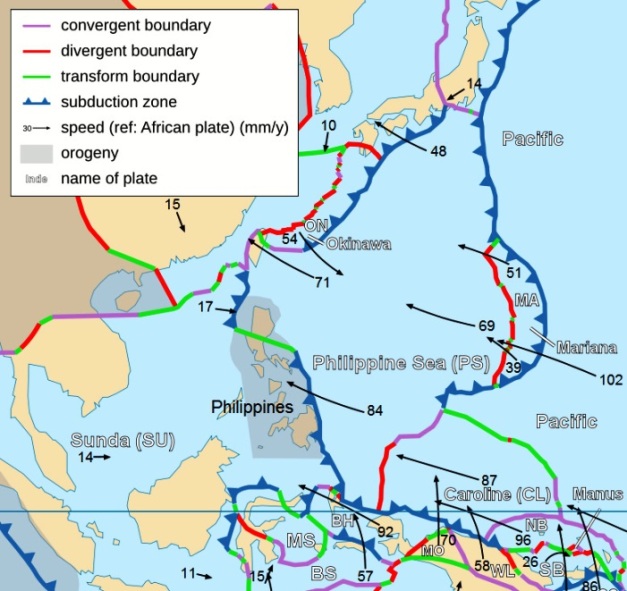 Mayon is part of the Philippine Mobile Belt, enclosed by the Philippine Trench and the Manila – Negros Cotabato Trench systems.  This portion is called the Bicol Volcanic Arc or the Bicol Arc.

It contains three active volcanoes and at least nine other Pleistocene major volcanic centers.  Volcanic products range from basalts to rhyolites.  Most of them are basaltic andesites and andesites indicating magma mixing and fractional crystallization.

Schematic of Bicol Volcanic Arc. Mayon is in the center with Irosin caldera in the lower right. Image courtesy Mirabueno et all. https://www.sciencedirect.com/science/article/pii/S1040618211005155

There are three stages of volcanic activity along the Bicol Arc throughout its history stretching as far back as initial subduction in the late Cretaceous.  The youngest episode is the current, with volcanic rocks less than 1.0 Ma.  Most of the volcanic centers are dated 0.5 – 0.1 Ma with the three active volcanic centers all younger than 0.1 Ma.

Some of the neighboring volcanic centers along the arc are quite large with one covering 900 km.  There is a caldera in the Bulusan volcanic complex.  Most of the complexes have multiple eruptive centers.  Andesites dominate the recent erupted materials.

Labo volcano is at the NW end of the Bicol Arc.  It is a stratovolcano 1,600 m high with a base 24 km in diameter constructed of layered andesite and dacite lava flows and breccias. 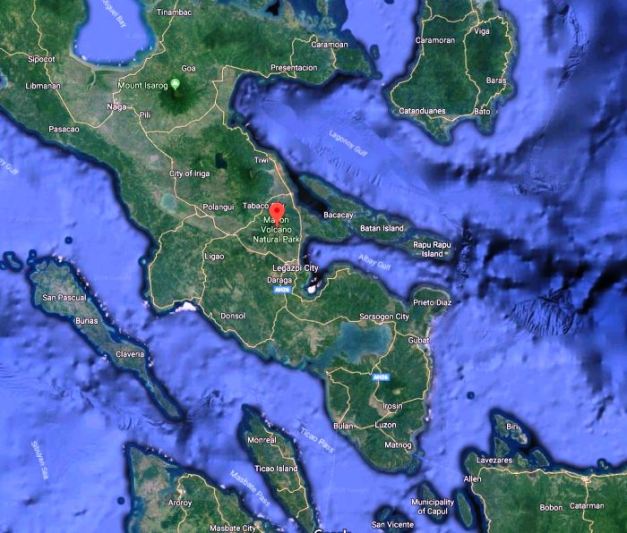 Culasi and Cone volcanoes are the next volcanic field in line covering 270 km2.  These volcanoes erupted primarily andesites and dacites.

Next in line are Isarog and Sangay, two separated stratovolcanoes constructed of andecites and dacites.  Sangay has massive lava flows.

Malino sits between Sangay and Mayon to the NW.

The Bacon – Manito volcanic complex is SE of Mayon.  It covers 225 km2.  There are multiple eruption centers in this complex with well-formed volcanic cones.  The majority of its activity ejects andesites.

The Bulusan volcanic complex is at the SE tip of the arc.  Bulusan sits in the 11 km diameter Irosin caldera.  There are seven other cones in the complex.  Bulusan itself covers over 900 km2.  Eruptions from Bulusan are phreatic, strombolian and caldera-forming.  Vocanic products vary from basalt to dacite with the vast majority being andesites.  The Irosin caldera forming eruptions produced extensive pyroclastic and tephra deposits to the north and NW of the caldera.  The caldera wall to the N and NW has been flattened. 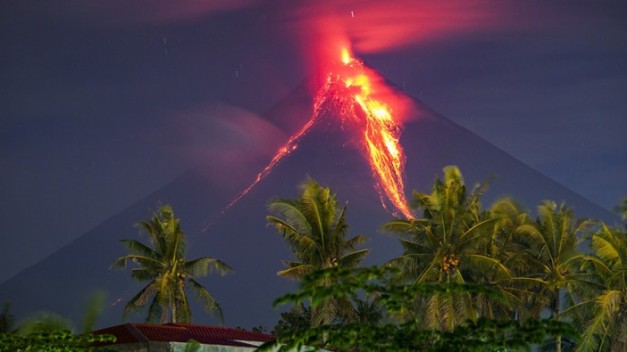 If the locals are lucky, this new series of eruptions will parallel the last several eruptions in the VEI 2 – 3 range.  If they are not lucky, things may get worse, much worse.  Typhoon season does not take place in this part of the world until Sept – Oct but substantial rainfall can always mobilize fresh and not so fresh tephras and ash sending lahars into the surrounding towns and farms.  As always with a stratovolcano a flank collapse / directed blast would represent among the worst possible outcomes.

Mayon is a very large, very active, and very dangerous volcano that should be treated with a great deal of respect. 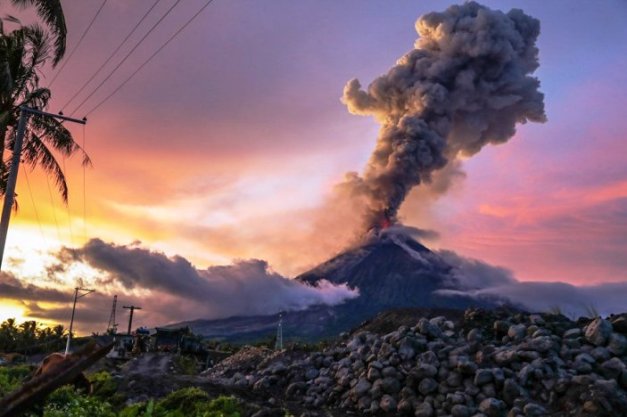 9 comments on “The 2018 Eruption Sequence at Mayon, Philippines”