The Aurora – Bodie volcanic field is near the California border NNW of Mono Lake.  It has well-preserved cinder cones and associated lava flows.  The most prominent volcano is Aurora Crater, 25,000 years old.  Older volcanic features are Pliocene andesitic lava domes and cones.

There were numerous hydrothermal systems active in Bodie Hills during its time of volcanic activity.  These emplaced gold and silver deposits which in turn drew gold, silver and other metal miners.

Magmas that powered volcanic activity were a result of the flat plate subduction of the Farallon Plate.  That subduction stopped 10 Ma.  The area is laced with faults.  Volcanic activity started with the onset of large magnitude extension of the Basin and Range province starting 15 14 Ma.  That extension created a series of NE striking faults which allowed rapid magma rise.  The region is considered ancestral Sierra Nevada.  The Bodie Hills volcanic field was the product of substantially different processes than those at the Aurora volcanic field.

Oldest activity built 4 trachyandesite, trachydacite and rhyolite domes.  The Masonic and Aurora eruptive centers were created 14.7 – 12.9 Ma.  The Masonic Volcanic Center is the largest volcanic feature in the field, is constructed of lava flows and debris flows.  It erupted 150 – 200 km3.  There was extensive hydrothermal alteration of the north side of the volcano.

The Aurora Volcanic center is the easternmost exposed center in the field.  It is built of lava flows, tuff breccias and debris flows suggesting it may have also formed a stratovolcano.  Younger volcanic rocks, extensive lava flows cover much of the Aurora center. 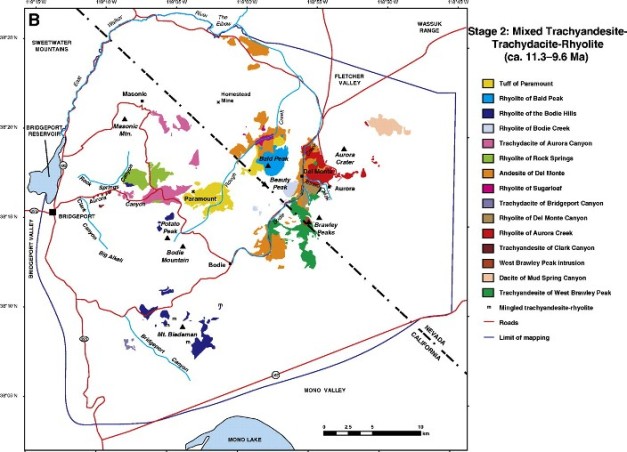 There are trachydacite and trachyandesite domes at Rough Creek covering 20 km2.  It was most recently active 12.9 Ma.  These dome complexes erupted over 100 km3.

Most recent volcanism took place in the Aurora Volcanic Field 3.9 – 0.1 Ma and erupted mostly lavas with diverse silica contents.  The field covers 325 km2 and is estimated 25 km3 of magmas erupted.  These include basalts, andesites, dacites and rhyolites, with andesites being the largest volume lavas erupted.

The Lunar Crater volcanic field is in central Nevada.  It dates from 6 MA – 35,000 years ago.  There are as many as 161 volcanoes, though the actual number is uncertain based on erosion of older eruptive centers.  Individual eruptions were typically 0.1 km3 and smaller.  The field has a seismically slow asthenosphere underneath it and is relatively separated from other monogenetic fields in the state.

Activity proceeded in four episodes – 6 – 5 Ma, 4.7 – 3 Ma, 1.1 – 0.4 Ma, and 300,000 – 35,000 years ago.  Activity generally shifted northward over time and partly overlapped the area of its predecessor.  Eruptive products include basalts, tephrites, basanites, and trachybasalts.  There are very minor volumes of trachyandesite and trachyte.  The overall northward movement is not parallel with that of the North American Plate and may be associated with underlying crustal fault lines due to Basin and Range extension.

Magmas appear to have originated as asthenospheric mantle magmas.  Eruptive products were unique and reflect upper mantle composition variability in the range of tens of kilometers.  Field products are consistent with ocean island basalt sources enriched with subducted oceanic crust (Farallon Plate).  There appears to be temporary ponding of magmas near the mantle – crust boundary

Volcanoes were fed by dikes formed by multiple pulses of magma and have complex plumbing structures.  The most common volcanoes are scoria cones and aa lava fields.  Eruptive styles are Strombolian to Hawaiian, which produced tephra blankets and lava fountains.  The eruptive styles are consistent across all 6 Ma years of activity.  Total erupted products are in the range of 20 km3. 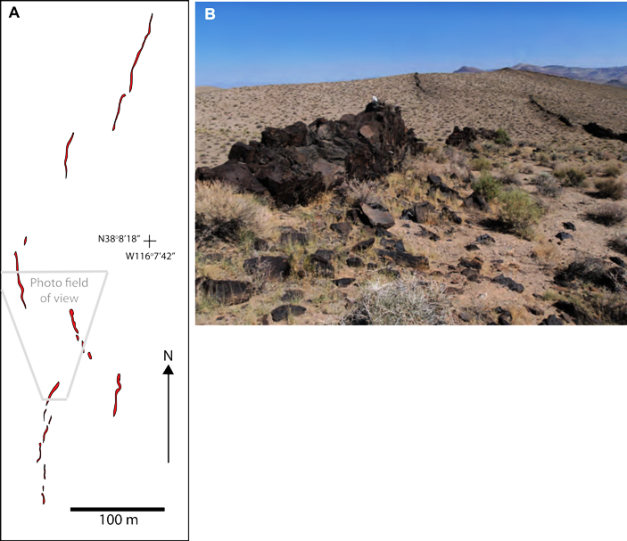 Most of the field is a 90 km x 5 – 15 km wide belt of volcanoes on and around two mountain ranges.  The older activity is clustered around the southern mountain range called the Reveille Range and adjacent Kawich Valley.  The younger and most recent part extends northwards into the Pancake Range.  The field is considered dormant.  Total field contains 142 – 161 total monogenetic volcanoes.  46 – 65 of them are in the Reveille Range.  96 are in the Pancake Range.

There are basins on either side of the Reveille and Pancake Ranges.  There are a small number of basaltic centers in these basins with partially buried cones poking above the surface leading to some speculation that the field may not be as narrow as it currently looks to be.

Comparison of monogenetic eruptive centers and their products. A & B are Marcath center. C & D are Easy Chair volcano. E & F are Giggle Springs. Image courtesy Valentine, et all. https://pubs.geoscienceworld.org/geosphere/article-lookup/13/2/391

Volcanic centers in the more recent Pancake Range field are clustered, in some cases densely clustered.  These eruptions continue to be monogenetic even though they are clustered and appear to be co-located.  Some of these eruptions were quite complex, with the 140,000 year old Easy Chair eruption creating agglomerate ramparts, two scoria cones, and a maar crater.  The clusters are generally elongated N – S like the rest of the field.  Reveille Range volcanoes are also clustered and those clusters generally oriented the same direction as the rest of the field.

There are 4 maars in the field, all of them in the Pancake Mountains field.  The simplest is Lunar Crater maar, 1100 m diameter by 130 m deep.  Bea’s Crater maar is part of a cone and rampart cluster.  Its formation disrupted three earlier cones.  It is two overlapping craters (440 m and 1050 m).  Easy Chair has a 540 m maar formed at the closing phases of its eruption.  The final maar is Middle Maar, a 550 m diameter crater on top of a cluster of scoria cones.

There are a pair of lava domes of trachyite and trachyandesite in the NE part of Reveille Range.  These are centered on thick lava flows (coulees) as much as 100 m thick extending nearly a km to the east.  There is a third lava flow extending 800 m to the north.

Buckboard Mesa dates 2.8 Ma and is located in the NE portion of the old caldera.

Sleeping Butte are two other basaltic centers that were active 300,000 – 10,000 years ago.  It is located on the southern flank of the Black Mountain caldera complex.

Buckboard and Sleeping Butte are both within the controlled boundaries of the Nevada Test site and the Nellis Gunnery Range and are not accessible to the public.  The proposed Yucca Mountain nuclear storage facility is also located to the south of the Timber Mountain caldera and its recent activity.  That activity is used as rationale to oppose its opening and future operation.

Clayton Valley has a single basaltic cinder cone with associated lava flow.  It dates around 390,000 years ago.  The rest of the valley has significant hot spring activity and is one of the premier locations in North America for lithium mining due to hydrothermal action on the underlying rhyolitic tuff underlying the valley. 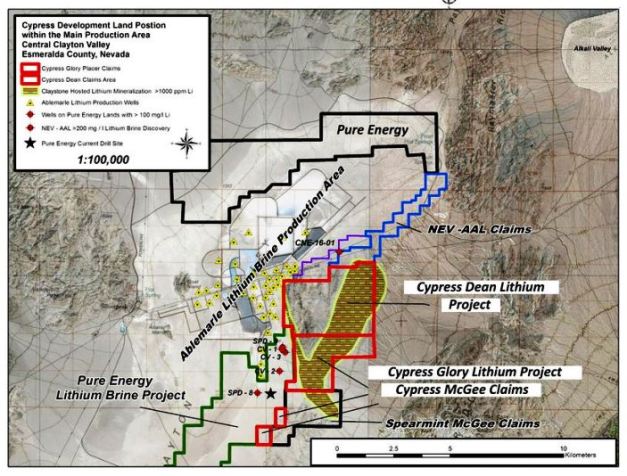 Lithium is mined from brines pumped from six aquifer units, lifted to the surface and evaporated to the point the salts are easily separated.

The significant tectonic events in Nevada over the last 50 Ma include the previously mentioned ignimbrite outbreak / caldera formation 38 – 18 Ma, the initial formation and movement of the Yellowstone hot spot in Idaho along the northern Nevada border, and the creation of the Basin – Range Province as the continent thinned.  This thinning created fault lines in the continent that allowed intraplate basalts to reach the surface in a number of areas.  The basalts also exploited areas of weakness around the periphery of several calderas.

Extensional tectonics have been active in this portion of the Basin and Range Province starting 34 – 23 Ma.

On the other, Hooper, et all in a paper posted in Mantle Plumes describes this as a logical outcome from what we know today of the Yellowstone hotspot.  There is a plume tail beneath Yellowstone to a depth of 600 km.  That tail tends to lag the movement of surface activity to the west.  Reconstructions of the progressive movement of the North American Plate since caldera eruptions began on the Oregon – Nevada border 16 – 17 Ma place the plume tail near the initial caldera formed, the McDermitt Caldera.   http://www.mantleplumes.org/P%5E4/P%5E4Chapters/HooperP4AcceptedMS.pdf

Map of McDermitt volcanic field and High Rock Caldera complex, the location where the Yellowstone hotspot plume started its eruptive track to the NE. Image courtesy Benson, et all. https://www.sciencedirect.com/science/article/pii/S0377027315003856

The McDermitt region separates flood basalt volcanic eruptions to the north from rhyolite activity to the east.   High elevation in eastern Oregon is also explained by higher mantle temperatures, which is also a signature of a mantle plume.  The high altitude of the terrain must be supported by a broad mass of hot, low density mantle, which they argue is the Yellowstone mantle plume head.

The separation between the flood basalt dike swarms 400 km to the north and the hotspot location on the Oregon – Nevada border may be explained by subduction of the Farallon Plate, which initially deflected the plume.  The plume tail rapidly recovered to the Snake River Plain by 14 Ma. 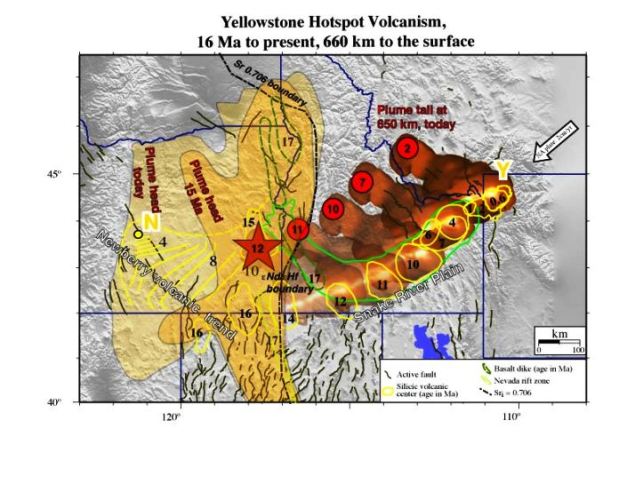 An alternate explanation is the spreading plume head was distorted underneath the thick craton margin of North America, deflecting it to the north beneath thinner lithosphere of accreted terranes.

Hooper et all believe that the plume model is capable of explaining both the Yellowstone and Columbia River Basalt Group activity.

West of Nevada, we have the border of the Basin and Range Province, and along the Sierra Nevada, generally just west of the California – Nevada state line, a newly forming major strike – slip fault line called the Walker Lane, that appears to be in the process of working its way from south to north, connecting numerous smaller faults into one major one.  It is currently working its way into Oregon.  Once fully established, at least one paper suggests that it will parallel the movement of the San Andreas Fault system, carving off another chunk of California onto the Pacific Plate on its journey north.  This is possible because the faults are sutures between attached terranes onto western North America.

Over the course of the last 35 Ma or so, Nevada has been a very busy place volcanically, starting with 20 million years of ignimbrite outbreak ending some 18 Ma in the center of the state.  At the same time, east – west extension of the entire state via Basin Range Province extension started, thinning the crust under the state.  To the north, the impingement of the Yellowstone hotspot mantle plume and its initial creation of both the Columbia River Basalt Group (CRBG) and the Snake River Plain volcanic provinces started perhaps 17 Ma.  CRBG started quickly and ended quickly.  Snake River Plain activity continues at Yellowstone.

In Nevada itself, more recent activity has been mostly intraplate basalts, monogenetic volcanoes, vents, and associated lava flows.  Slightly older activity was rhyolitic.  Substantial remaining heat flow powers widespread hydrothermal activity in the state and supports a growing geothermal energy industry.  There are still a number of low velocity zones under the state, so future activity in the state remains possible. 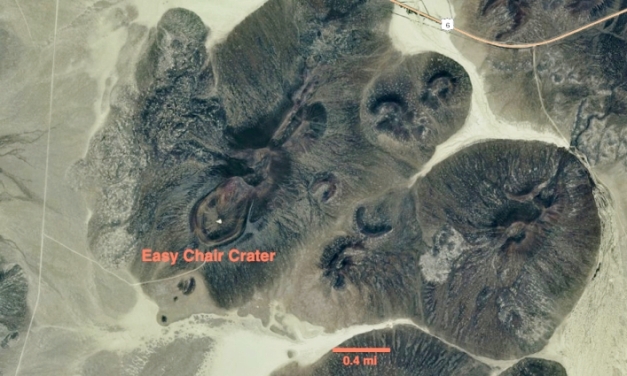