WHODUNNIT – if not BABUYAN CLARO? (🇵🇭) 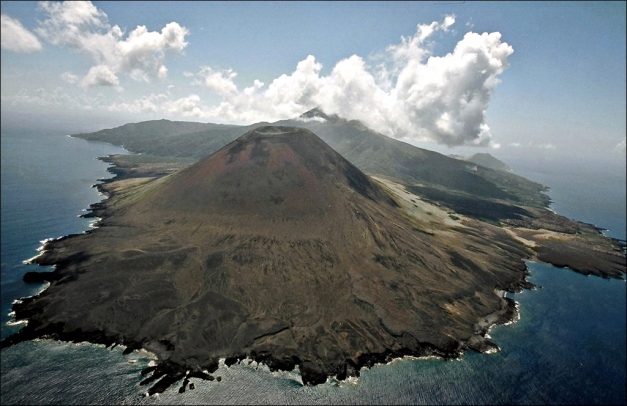 “The 1831 eruption of Babuyan Claro in the Philippines is regarded as one of the most significant volcanic climate forcing events of the nineteenth century, particularly so when treated as a double eruption with the 1835 (VEI 5) eruption of Cosegüina, producing ‘enhanced’ forcing effects over a decadal time frame.”
Follows the course of much detective work and its conclusion:
“We therefore suggest that the 1831 eruption of Babuyan Claro is a false event and that one or more alternative eruptions will have to be identified as the source of the 1831 stratospheric sulphate aerosol.“

The above is from a paper by Garrison et al., “The 1831 eruption of Babuyan Claro that never happened: has the source of one of the largest volcanic climate forcing events of the nineteenth century been misattributed?” which was published a few weeks ago. This sounds like a detective story. Alas, it is just the first part of one, the elimination process, finding that the suspect is very probably innocent.

Garrison et al. set out to identify the first-hand (primary) source of reports about the “great eruption” of Babuyan Claro in the northern Philippines. An eruption that is generally acknowledged to have had an influence on the global climate and also caused various optical weather effects around the world at the time. Who had actually witnessed this volcano erupting? The authors followed every statement back to its source, trying to find the first reliable report. The amazing result was that, over the course of 150 years up to the present, a number of reputable authors had referenced other reputable authors… going back to the first one – who had mentioned no more than a thought. This was the German Biologist Franz Julius Ferdinand Meyen, who made the following remark in his “Reise Um Die Erde” (Voyage Around the World, 1835):

This is the single sentence, a thought rather than a fact, which lead to the modern classification of the 1831 Babuyan eruption as a climate-affecting VEI 4 event. (F.J.F. Meyen, “Reise Um Die Erde”, 1835)

Translation of the underlined text: “The mountains of Babuyan may exceed a few thousand feet in height, their western peak forming a steep cone, which is probably the volcano which only a short time ago had caused the inhabitants of the Island to flee.”

So, this is what Meyen in August 1831 perhaps just vaguely remembered to have read somewhere, but he neither saw an eruption nor did he give a source of his recollection. Everybody else had referred to his statement and, in some cases, had added their own “conclusions”.

How long was Meyen’s “a short time ago”? Garrison et al. dug further back in the archives and found a credible event that had occurred 150 years before Meyen’s journey: one historian, Vicente de Salazar, reported that, in 1681, a volcano on top of a high mountain on Babuyan Claro island threw out “fire, rocks and ash” and produced a “huge boom”. A Spanish missionary at the time told local people that this was God’s punishment for them living on a remote Island. They must leave immediately and live in easy reach of the church – which they did on the spot. From then on Babuyan Claro remained uninhabited until about 1890. Could this have been what Meyen had remembered? Perhaps he had read Salazar’s account in preparation for his journey? This 1681 eruption, b.t.w., is thought to have been no more than a moderate event. Ironically, it is not listed in the GVP eruptive history of Babuyan Claro. 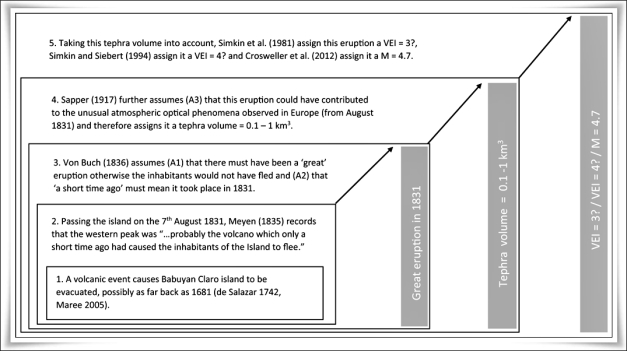 As the authors followed every statement back to its source they found all could be traced back to one man: F.J.F. Meyen. Here the probable (pre-)history of the 1831-eruption-of-Babuyan-Claro tale as suggested by Garrison et al., 2018.

The misattribution of one author’s remarks made its way into many seafarers’ accounts, almanacs and travel books. Later into scientific works, catalogues and databases – including the Global Volcanism Program and its “Holocene volcanoes and their eruptions” database. The GVP has Babuyan Claro 1831 listed as a VEI 4 event. Wikipedia even mentions a tephra volume for that eruption of 550 Mill. m³, which nobody has ever measured. It is just a calculated figure referring back to what defines a VEI of 4.

If Babuyan Claro did not erupt in 1831, there remains the question: which volcano did have a “great eruption” at that time? Unusual atmospheric optical phenomena were observed around the world in August, September and October that year, including a high haze, a dimmed blue or green sun and “volcanic” sunsets. Unusual surface temperatures were recorded in 1831-1833. Most compelling is a sulphate peak detected in ice cores from Greenland for that year, with deposition continuing until 1833. For the 19th century it would have been placed – in its lowest estimation – just behind the eruptions of Tambora (1815), Unknown (1809), Cosegüina (1835) and Krakatau (1883). Other authors say it was the third or even second largest eruption of the 19th century.

Unfortunately I have not found a way to search the GVP database by date. However, like every given year, 1831 had its fair share of eruptions. Some random hits show that most of them would not have been large enough to cause any upset in the climate. Moreover, we don’t know if an eligible eruption from a remote place would have been reported at all.

My thoughts are that it must have come from a volcano near enough to the air currents that would carry ash particles and/or So2 to Greenland in a quite direct and constant manner. As the deposits in ice continue over at least two years, smaller events must have been recorded too. No volcano produces constantly great Plinian eruptions over years, as far as I know. And, if there were such a volcano, the old researchers wouldn’t have chosen Babuyan Claro for this particular source.

Now that the question has been raised in public, it won’t be long until another team comes forward with suggestions as to the real culprit. In the meantime, everyone who reads old travel accounts may keep an eye on reports of flying “fire, rocks and ash” and “huge booms” around the year 1831!

Even if the volcano did not change the climate, let’s have a look at it anyway; we might hear from it in the future. In old accounts Babuyan Claro “seemed to be always erupting”. It had mostly effusive strombolian eruptions, with impressive lava flows reaching the sea. Perhaps it wouldn’t be surprising if it became active again.

Babuyan Claro Island is a complex of stratovolcanoes within the Babuyan Islands group, located in the Luzon Strait north of Luzon. The archipelago consists of five major volcanic islands; Babuyan is the most northerly of them. The other four are Calayan, Dalupiri, Fuga, and Camiguin. Calayan, Dalupiri and Fuga lack active volcanoes. A new island, named Didicas, emerged from the sea after a volcanic eruption in 1952. Mt. Didicas has erupted seven times since 1773 and now stands 244 m above sea level. 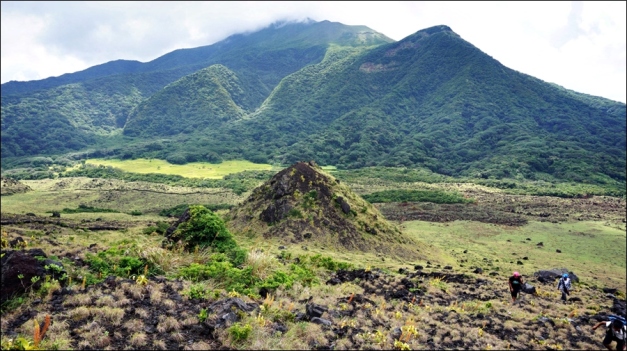 The center massif, Babuyan Claro, consists of four relatively young volcanic edifices. The highest point is at Mt. Pangasun (or Chinteb a Wasay, 843 m), a strato cone with two well preserved craters of 300 m and 400 m in diameter. Further peaks are Cayonan in the south, Naydi and Dionisio in the southeast. The western end of the island is occupied by an isolated picturesque cinder cone of basaltic andesite (688 m). This is Smith volcano, which had its last eruption in 1924; it is also known as Mt. Pokis locally. On July 8, 1993, following reports of unusual volcanic activity, volcanologists investigated Smith volcano, but did not detect anything out of the ordinary. Both B. Claro and Smith volcanoes have apparently been active in historical time, although the identity of the erupting volcano was not always certain. Historic events were listed in 1652, 1831-?, 1860, 1907, 1917-19, 1924.

View S from Smith volcano where the youngest flows have built deltas into the sea. 4/2015 (© Harly Limlingan Marcuap, via Akrosdayunibers blog)

The Philippine Archipelago is where four tectonic plates meet – these are the SE Eurasian pl., the Philippine Sea pl., the Pacific pl., and the Indo-Australian plate. To the east we find the seismically active Philippine Mobile Belt on which the majority of the country is located. This region is an actively deforming zone composed of several terranes. It is bordered by subduction zones: the west-dipping Philippine Trench and East Luzon Trough to the east; and the east-dipping Manila, Negros, Sulu, and Cotabato Trenches to the west. The Philippine Fault has a slip rate of 2 to 4cm/yr. The eastern islands of the Babuyan group are part of the Babuyan (or Bashi) Segment of the Luzon-Taiwan Volcanic Arc which leads all the way north into Taiwan.

WHO LIVES ON BABUYAN CLARO ISLAND? 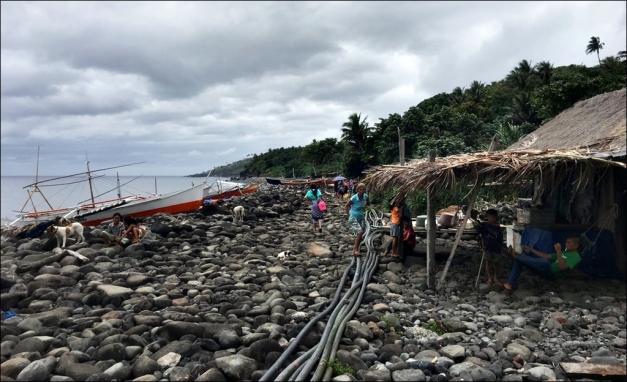 Babuyan Claro is home to the Filipino indigenous group Ibatan. On June 1, 2007, the Ibatan people were awarded title to their island home of Babuyan Claro, with all collective rights to natural resources, including 5 km of ocean around the island. The Ibatan were officially announced as the 111th “indigenous cultural community” in the Republic of the Philippines.

Now the island is protected ancestral land placed under the care of the tribe’s elders. If you wish to visit the island you need first to coordinate with the council and get their approval before starting the journey.

One traveller recounts: “Its locals are very shy and, more often than not, are satisfied just watching their guests from a distance. Should the case be that you catch them intently observing you, they are quick to give you their brightest smile before scurrying away from the attention. But do not be deceived by their shyness because they have one of the biggest and the most hospitable hearts that I have experienced in the Philippines.” The Ibatan, who lived a completely isolated life of planters and fishermen up to less than 50 years ago are now becoming more and more adapted to the ways of western life. Education, electricity and commerce have made them take a plunge into the present…

Volcanic sand and black basaltic boulders on the SE side of Babuyan Claro. (© Harly Limlingan Marcuap, via Akrosdayunibers blog)

From all the enthusiastic reports of visitors it seems to be a wonderful island, with black beaches,  lush jungle, rare plants and strange animals. The forest teems with colorful birds, spiders, grasshoppers or praying mantises; many flowers bloom on the black lava fields. The reason that it hasn’t turned into a tourist-ridden holiday resort so far may be a question of accessibility. 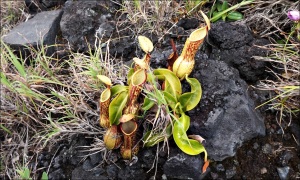 As another description says: “In contrast to the hospitality of the Ibatan, Babuyan Claro is probably the most unwelcoming island that I have encountered in the Philippines. It is not enough that it takes 6 hours of sea travel from Sta. Ana to Babuyan Claro. The waters that surround the island are also relentless in giving you a memorable ‘splash’ that could either excite you or, more often than not, scare the sh*t out of you. And the weather can be quite uncooperative…”

I hope it stays like this for another while. 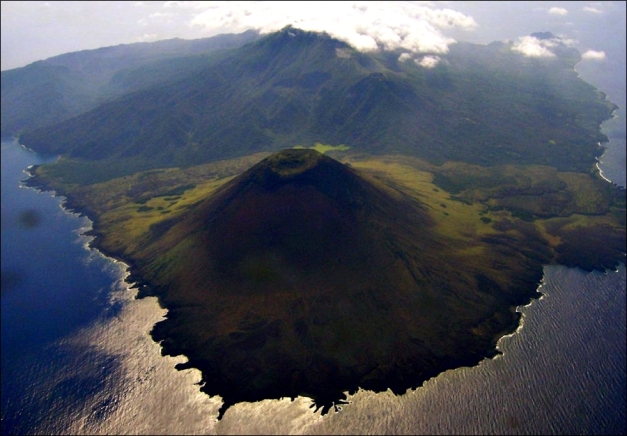