Why is Akutan the Eighth Most Dangerous Volcano in the US? 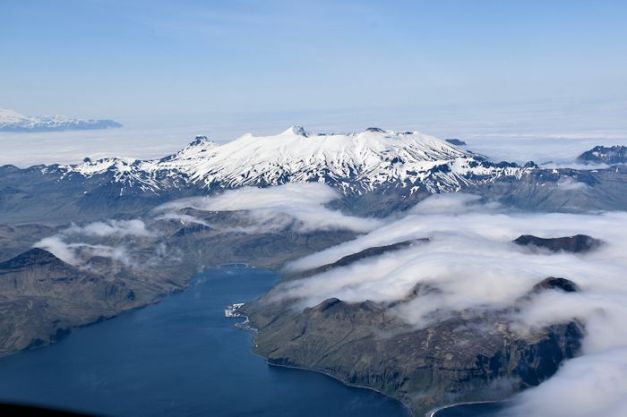 Akutan Volcano looking west. Village of Akutan on the north side of the bay in the foreground. Image courtesy Vlad Karpayev, AVO, June 2018. https://avo.alaska.edu/images/image.php?id=117501

The USGS released their “2018 Update to the U.S. Geological Survey National Volcanic Threat Assessment” in October 2018.  I linked to the product in one of the comments the Havre Island pumice raft post.  You can find the product at the following link:  https://pubs.er.usgs.gov/publication/sir20185140

As expected, the list starts with Kilauea.  The next 17 are listed as red with number 18 being Long Valley.  The remainder of the Top 10 in order are St. Helens, Rainier, Redoubt, Shasta, Hood, Three Sisters, Akutan, Makushin and Spurr.

I know why Redoubt and Spurr are listed.  Akutan and Makushin surprised me, being well out along the Aleutian chain.  What better excuse for a couple posts on Aleutian volcanoes do I need? 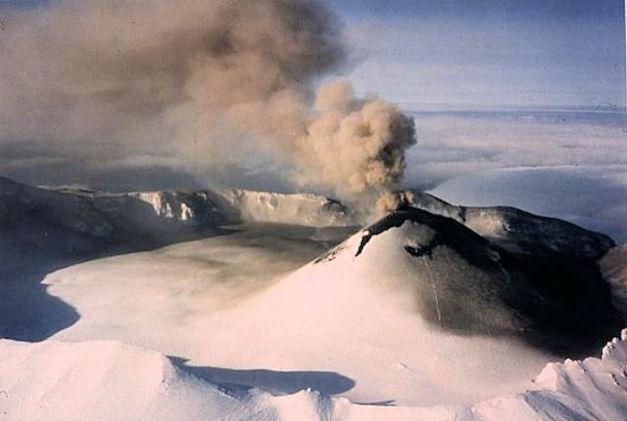 Akutan Island is one of the more active volcanoes in the Aleutians.  The 1,303 m high volcano is topped with a 2 km wide caldera.  It has an active intracaldera cone.  There is an older buried caldera.

The March 1996 dual swarms of large earthquakes, ground cracking, and dike emplacement is viewed as a failed eruption.

Akutan is the largest (only?) village on Akutan Island.  It is located 13 km east of the volcano and some 1,233 km SW from Anchorage.  There are around 1,000 people living in Akutan.

The village started out as an Aleut village.  Initial industry was a fur trading port in 1878.  This grew a fishing and processing business by the first part of the 20th Century.  A whaling station and processing facility were built across the bay in 1918 that operated until 1939.

Akutan was evacuated in 1942 when the Japanese attacked Unalaska in June.  A Japanese Zero crashed on Akutan in June.  US military recovered the aircraft and were successfully able to exploit its flight abilities.  This was the first time US engineers were able to get their hands on this very effective Japanese fighter.

Residents returned in 1944.  Today there are less than 100 full time residents.  The majority of the 1,000 population are transient commercial fishermen and fish processing employees.  Akutan is co-located with the original Aleut village, Unangan.  Year-round residents participate in subsistence fishing and hunting.  Some are locally employed, though the unemployment rate among locals is very high. 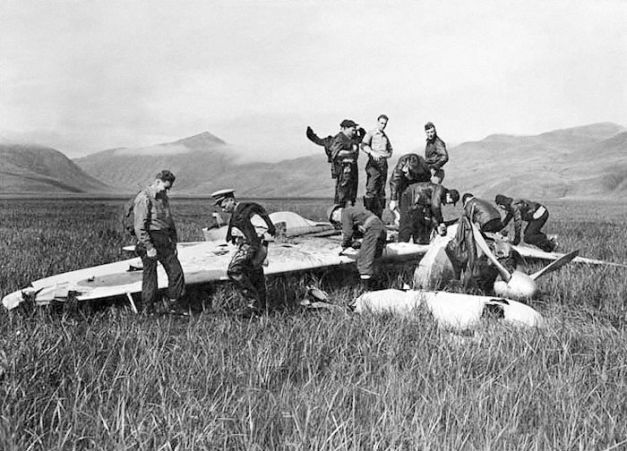 Climate is maritime, with mild winters and cool summers.  There is no shortage of rainfall, high winds and storms in the winter, and fog in the summer.

There was a 2010 feasibility study of drilling geothermal energy wells to provide energy for the village and the fish processing operation.  Currently, all energy is produced by diesel generators with fuel imported from out of state.  The study concluded that there is a shallow geothermal zone of up to 180 C water available and a deeper, hotter, > 220 C zone.  The second zone is a bit riskier but possibly lower development cost.  There were two wells drilled.  The project is currently on hold.

Akutan is a basaltic, basaltic andesitic, trachyandesite volcano.  It has at least two visible calderas, the most recent one formed 1,600 years ago.  The most recent caldera is 2 km in diameter.  It hosts snowfields, ice cliffs and small glaciers.  Topographic maps show small valley glaciers extending down the flanks.  None of these were observed in 1996.  There is a breach in the caldera wall on the NE side.  That breach has recent lava flows and lahar deposits.

The older caldera extends 2 km to the SW and is partially obscured by the newer caldera.  It is mantled by pyroclastic, lahar and tephra deposits on the upper flanks of the volcano.  The older caldera forming eruption is estimated to be 8,000 – 10,000 years ago.

The most recent caldera forming eruption was originally thought to be 5,200 years ago.  This date was revised moved to the current 340 AD date in recent years.

There are at least four large eruptive centers on the Akutan flanks.  The youngest produced the Lava Point flows and may be younger than the year 1800.  There are possible historic reports of activity at Lava Point, but these are ambiguous.  Cascade Bight near the base of the modern cone has a small lava flow, remnants of a volcanic vent, and a number of visible dikes.  Flat Top is the largest of these centers, and located SW of the caldera.  It dates 25,000 years old.  It consists of many of the features as Cascade, though the lava flows are much more extensive.  It has a radial dike complex.  The oldest center is Long Valley, which has domes and shallow breccias dating around 58,000 years, 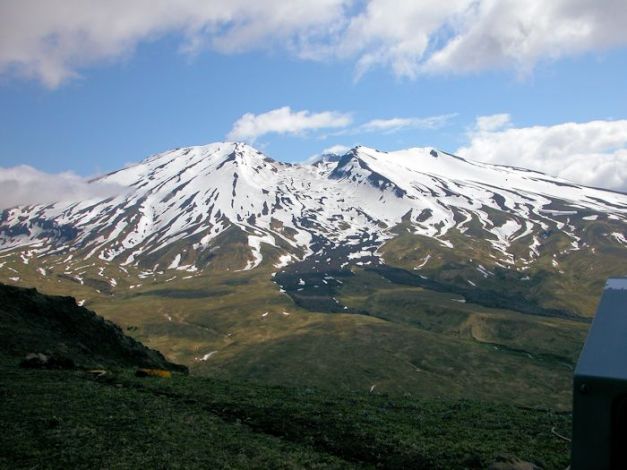 There are three small craters in the summit with several fumarole fields along its S and SW flank.  There is a crescent shaped lake along the inner SW rim of the caldera.  There were two additional small lakes that are no longer visible and may have drained though a gap in the north caldera wall.

Ash from Akutan is typically dark brown or black.  Layers of this date back to 8,500 years ago at Reef Bight and 6,100 years at Akutan Harbor.  They are layered with layers of lighter ash thought to be from other volcanoes.

The oldest of at least three lahar deposits at Flat Bight document an unknown number of minor eruptions 6,000 – 1,400 years ago.  There is a minor lahar in Hot Springs Valley thought to come from a minor collapse of the volcano flank.  This lahar likely reached Hot Springs Bay about 6,000 years ago.  A second lahar associated with another minor flank collapse went down Long Valley.  This one has large blocks of volcanic rock.

Here is a widespread 1 – 2 m thick tephra, associated pyroclastic and lahar deposit in Long Valley and Broad Bight.  It corresponds with the formation of the modern caldera 1,600 years ago, the largest known eruption of Akutan in the past 8,000 years. 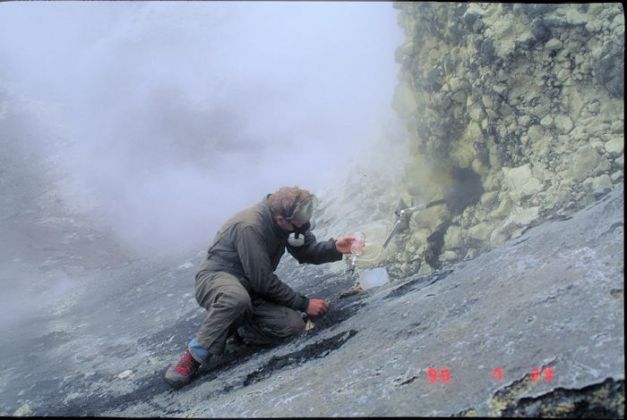 Akutan erupted almost 20 times in the 20th Century, the most recent of which was December 1992.  These eruptions are typically VEI 2, occasionally smaller.  There were at least another 13 eruptions in the 19th Century.

There are at least four larger eruptions, stretching all the way back to 4,150 years ago.  The most recent caldera forming eruption is estimated as a VEI 5 in 340 AD.

There were over 100 seismic events recorded in 2008.  They decreased in number in the subsequent two years.

Young basaltic lave flows cover the caldera floor north and south of the cinder cone.  They also extend downslope from the caldera several hundred meters.  The entire island has an ash and tephra layer.  Landslide and mudflow events have moved much of this into valleys to the N and NW of the caldera.  There are active hot springs NE of the caldera at Hot Springs Bay and Valley. 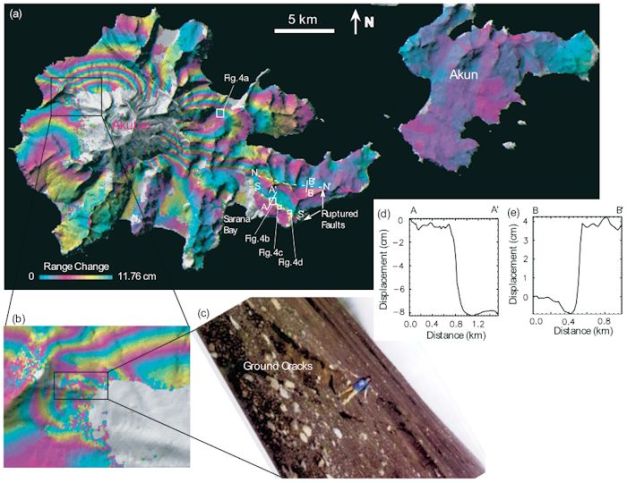 There were around 3,000 quakes felt by residents with the maximum M 5.1.  Synthetic aperture radar measured complex island-wide deformation, with the western part of the island moving upward and the eastern part moving downward.  There were new ground cracks associated with reactivated faults on the western part of the island.  The deformation was modeled as emplacement of a shallow E – W trending dike in the NW flank of the volcano and inflation of a deep magma body beneath the volcano.  Parts of the western portion of the island were uplifted by as much as 60 cm.

Location of epicenters of earthquake swarms during March 1996. Crack location on the NW flank of the volcano is due to dike emplacement. Most of inflation took place west of the caldera rim. Image courtesy Lu, et al, 2005. https://www.semanticscholar.org/paper/Surface-deformation-associated-with-the-March-1996-Lu-Wicks/b52a5cf237800492c1bed150cfb5d1d25fe3973a

The 11 March 1996 swarm had over 80 quakes M 3.0 and greater with the largest M 5.2.  New cracks developed as a result of this swarm in three parts of the island.  The worst of these was nearest the summit.  Akatan, 13 km E of the volcano is the largest village on the island.  Its industry is a Trident Seafood fish processing plant.  Villagers and plant employees fled the island during the 1996 seismic events.

At the beginning of these swarms, Akutan was not locally monitored.  The closest seismograph was at Dutton Volcano near King Cove 260 km to the east.  AVO quickly set up a temporary seismic network on Akutan by March 18 and recorded thousands of local earthquakes March – August 1996.  They followed it with a network of six permanent stations deployed by July 1996. 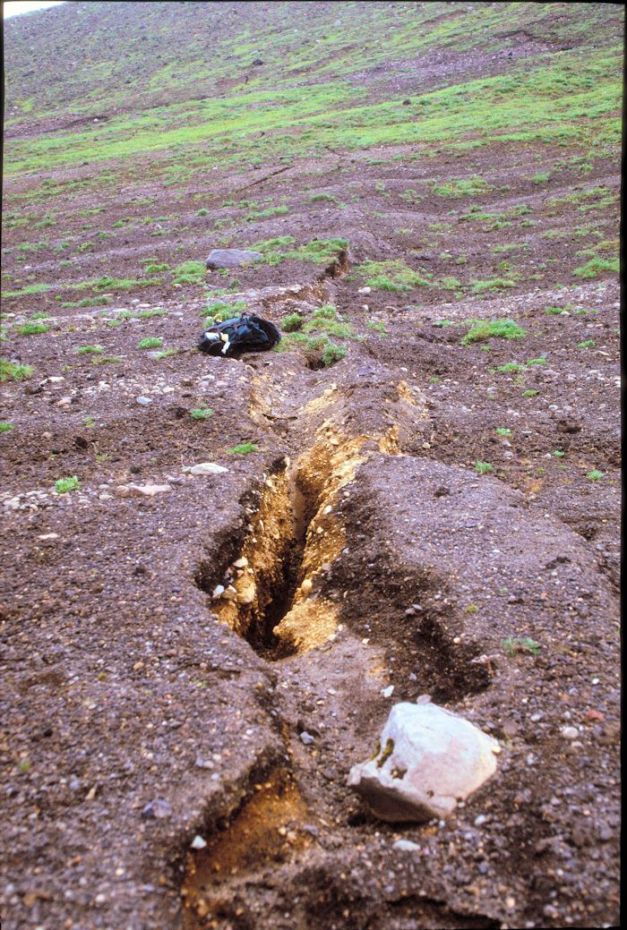 Ground cracks were found in three areas along the rift zone along the long E – W axis of the island.  Each zone was 300 – 500 wide by 3 km long.  Vertical displacement along individual cracks was 30 – 80 cm.  The most extensive cracks were found between Lava Point and the summit.  The earthquakes and cracks are thought to be emplacement of magma either 3 – 5 km below the surface or in a much shallower dike.

Tectonic map of collision of Pacific Plate and North American Plate along the Aleutian Trench. Locations of most recent Great Earthquakes depicted. Akutan is just to the west of Unalaska. Image courtesy Brown, et al, 2013. https://agupubs.onlinelibrary.wiley.com/doi/full/10.1029/2012JB009459

Like the rest of this section of the Aleutians, volcanic activity is driven by the subduction of the Pacific Plate under the North American Plate.  Subduction rate is around 6 cm / year.  This subduction zone ruptures with four M 8+ in the last 75 years.

Deep nonvolcanic tremor was discovered in Japan and Cascadia in the early 2000s.  It occurs during periods of slow slip.  It is thought to be due to low frequency earthquakes on the plate interface of the locked portion of the subduction zone.    It was observed along the Alaska – Aleutian arc around 2010, though it is difficult to observe due to frequent signals from volcanoes, earthquakes, and active hydrothermal systems. 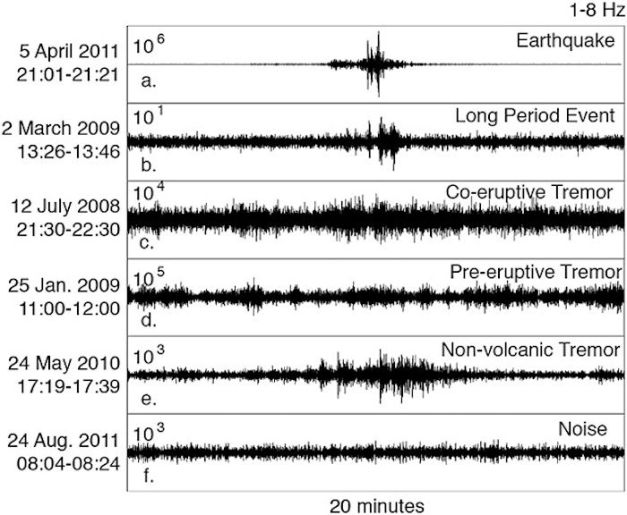 Volcanic tremor is typically detected within the top 5 km of the crust.  Tectonic tremor is typically much deeper, at the locked portion of a megathrust zone, around 40 km.  An analysis of Aleutian low frequency earthquakes in the East Aleutians near Unalaska 2007 – 2010 discovered eight 20-minute tremor episodes.  Data for this was gathered from seismographs at Okmok, Akutan and Majushin volcanoes.  These are concentrated at the edge of the 1957 M 8.6 earthquake, though depths are greater at 50 – 65 km.

This detected tremor is consistent with modeled slip at the dipping plate interface.  It occurs across all parts of the Alaska – Aleutian subduction zone, on the continental part, on the oceanic part, and the depth increases from 45 – 75 km from east to west along the length of the subduction zone.  A 2013 paper by Brown et al, suggests that the difference in depth of the low frequency earthquake / tectonic tremor along the zone is due to the depth that hydrous minerals release fluids to enable tremor.  This release occurs deeper when the incoming plate is older, faster, and colder, which you get as you move westward along the Pacific Plate.  As usual, this simple model will be updated with more observations and analysis.

Tremor observations from Japan suggest that it defines a the depth of extensive slip in large megathrust earthquakes.  If this relationship holds for Cascadia, the rupture zone is much closer to major metropolitan cities than currently believed.  Tremor location near Kodiak are consistent with the location of the 1964 Alaska earthquake.  Unfortunately, the farther west you get along the Aleutians, the worse tremor locations get. 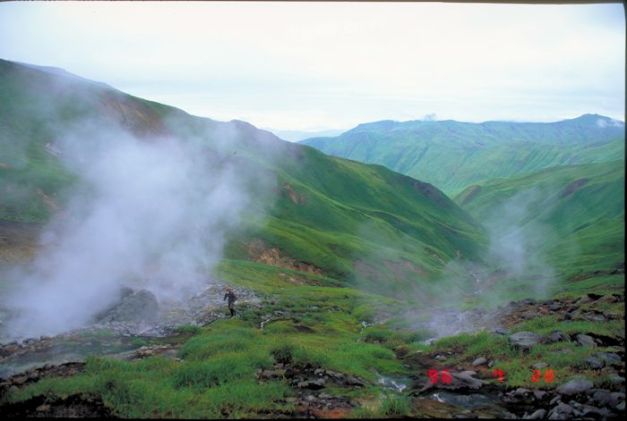 Given it recent active history, 1996 failed eruption, and location under the air traffic routes over the Aleutians, it is no surprise to me that Akutan is listed as a very dangerous volcano.  It is one the three most active volcanoes in the Aleutians.  It has been recently active and is capable of producing VEI 5 sized eruptions, which it has done at least twice in the last 10,000 years.  The island supports a vigorous hydrothermal system, permanent snow and ice cover, both of which will exacerbate the lahar thread in future eruptions.

ISS photo of Akutan, Oct. 2002. Note both calderas easily visible along with intracaldera cinder cone in most recent caldera. Intracaldera lake is no longer completely iced over. North it to the top of the photo. Image courtesy NASA. https://avo.alaska.edu/images/image.php?id=1700