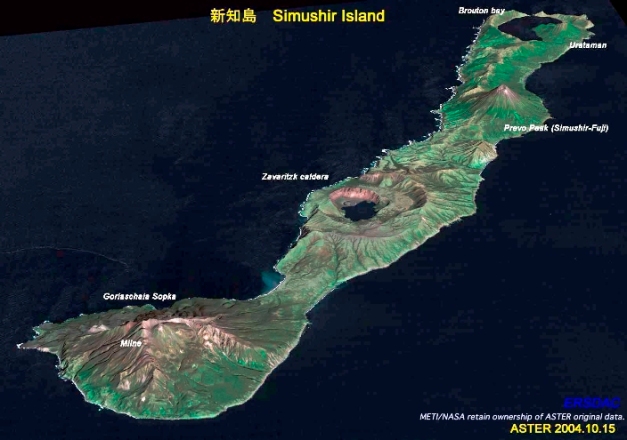 This started out as a post about Zavaritzki Caldera, but the closer I looked at the island it is situated on, the more interesting the entire island became, so I modified the original thought a bit.

Simushir Island is sparsely inhabited, with just over 100 people within 100 km of the various volcanoes.  The island sits near the center of the Kuril Islands.  It was formerly known as Marikan.

Ownership of Simushir Island transferred from feudal Japan to Russia by treaty in 1855.  Russia transferred it back to Japan in 1875.  Settlers raised Arctic fox and reindeer.  The civilian population was evacuated to Japan during the runup to hostilities in WWII and Japan stationed a garrison on the island.  Russia (Soviet Union) regained control of the island in 1945.  The Soviet Union built a submarine base and maintained a population of 3,000 on the island 1987 – 1994.  The island is now uninhabited.

The island is nearly 60 km long, with a total surface area of 227 km2.  It has two calderas, Brouton Bay at the northern end of the island, and Zavaritzki near the center.  There are four volcanic complexes on the island.  Volcanoes on either end are referred to as separate entities, leading to many descriptions of Simushir Island hosting six separate volcanoes.

On the north end, we have Brouton (Broutona) Bay (partially submerged caldera) and Uratman (Urataman) (somma volcano partially filling the caldera).  Next two volcanoes to the south are Prevo (stratovolcano with a small caldera lake at its summit) and Zavaritzki (triple nested caldera).  At the southern end of the island we have Milna (highest point on the island), and Goriaschaia Sopka (a dome on the north flank of Milne).

Are there four or six volcanoes on this island?  Your guess is as good as mine, as even authoritative data repositories like the Smithsonian GVP describe them both ways. 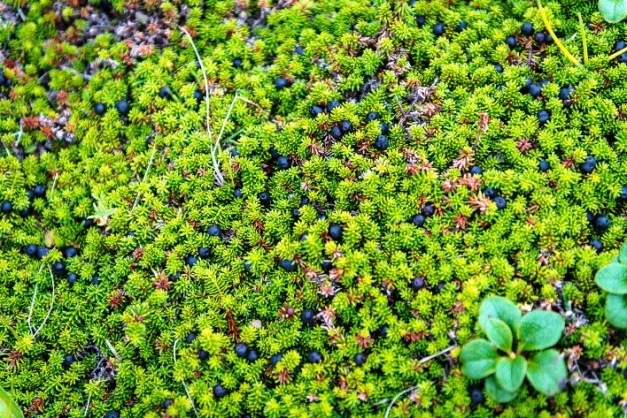 Empetrum (crowberries) on the flanks of the volcanoes of Simushir Island. Image courtesy Eugene Kaspersky Aug. 2014.

Climate is typically a wet subarctic one, nearly a polar climate that is mitigated by the offshore Oyashio Current.  There is no permafrost on the island.  Summers are wet, cloudy and foggy.

In the fall, Empetrum (crowberries) are thick on the flanks of the volcanoes and the flat parts of the island.  Foxes are the only land animals, though there are plentiful sea bird rookeries and sea lions present.  Streams on the island are few and small.

Volcanoes on this island are predominantly andesitic to basaltic andesitic in eruptive products.

This part of the Kurils is monitored by SVERT with a backup by KVERT.  Ash warnings are from the Tokyo VAAC.

The island had a significant Soviet presence for nearly 20 years before being abandoned in the 1990s.  A visit documented by Eugene Kaspersky in his official blog describes a 2014 visit to Simushir.  They didn’t make it to either end of the island choosing instead to visit Zavaritski Volcano.  Kaspersky related Kuril local claims that the Soviets tried to widen the breach into the caldera so that their larger subs could pass through safely.

The opening in the caldera is called Diane Strait.  It is only 33 m wide and 9 m deep.  Once inside, the caldera is as much as 250 m deep surrounded by walls up to 450 m high.  The base had three floating docks, one of which remains floating and used by the occasional tour boat. 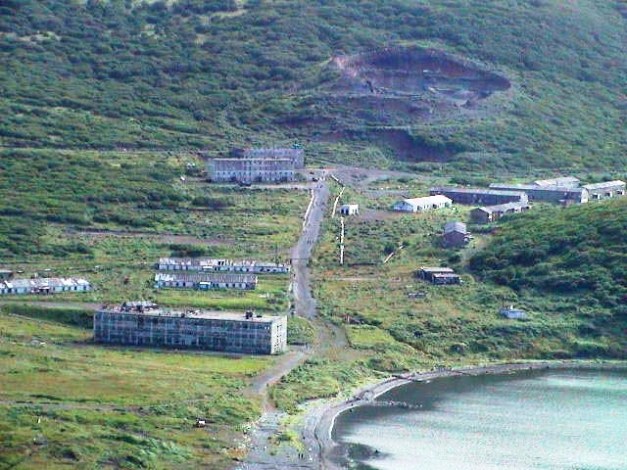 Kraternyy Submarine Base/ Apartment building on the shore of the bay. Scoria mine in the background up the hillside a bit. Image courtesy Wayne Brown, The Russian Kuril Islands Expedition.

Toward the end of the life of the Soviet Union, they built the Kraternyy submarine base and operated it 1987 – 1994 out of Brouton Bay on the northern end of the island.  This was to be a secret base.  I am still trying to get my head around the notion that a submarine base without an underground component can possibly be secret in the age of multiple daily satellite passes overhead.  What we do know is that there was a significant amount of concrete poured constructing facilities.  And those facilities include apartment buildings, hospital, livestock pens and a school.  Antiaircraft gun turrets are outside with rusting guns as are rusting vehicles and fuel tanks.

Today the facility is occasionally visited by tourists.

Uratman volcano created a 7.5 km caldera at the northern tip of the island.  This caldera is breached to the north, half filled with sea water.  It is called Brouton (Broutona) Bay.  The other half of the caldera is filled with an andesitic central somma stratocone called Uratman in the SE portion of the caldera.  There are two cinder cones on the north flank of Uratman and a lava dome on its NW flank along Brouton Bay.  There are no historic eruptions known from this complex.

The caldera may date as old as 126,000 years old, perhaps more recent.  Subsequent activity built Uratman Volcano as a somma occupying nearly half the caldera.  It tops out nearly 200 m above the caldera rim at 678 m.  There are also three above ground domes built after the caldera-forming eruption.  I ran across a report of at least one dome discovered in the deep caldera floor, though was not able to confirm it in other papers.

Uratman is built of alternating lava flow, volcanic breccia and scoria layers.  The lava flows are typically basalts, andesites and basaltic andesites.  The domes are more complex and evolved, ranging from basaltic andesite to dacites.

Seismic analysis around 1990 identified low velocity zones that are interpreted as peripheral magma chambers with shallow tops.  Gravity field analysis of all volcanoes on Simushir in the mid-1980s show zones of lighter volcanic rock masses beneath the volcanoes.  These analyses are interpreted as shallow magmatic masses with abnormally high temperatures under all Simushir volcanic centers.  Despite this, there has been no recent activity from Uratman or the greater caldera.

Geothermal sampling of Brouton Bay in 1985 identified at least five sediment layers on the bottom of the bay.  These are thought to correspond with eruptions from the Uratman volcano and associated dome complexes.  They date as follows:  5,900, 4,100, 2,500, 1,360 and 500 years ago.  While currently quiet, these debris layers indicate the complex is still active. 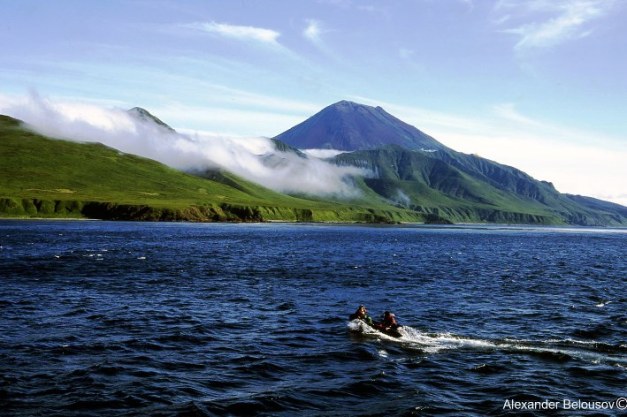 Prevo Peak is a beautifully symmetrical volcano north of Zavaritzki.  It tops out at 1,360 m.  There is a half a kilometer wide crater at the top with a nested inner cone and small crater lake.  There are young lava flows on the flanks that reach the ocean on the east and west flanks.  Two small cinder cones on the western flank produced lava flows that almost reached the Sea of Okhotsk.

There are only two known eruptions from Prevo Peak in historical times.  The largest was in 1765 and produced pyroclastic flows that made it all the way to the base of the volcano.  Most recent activity was weakly explosive in 1825.  These eruptions were classed as VEI 3 and VEI 2 respectively. 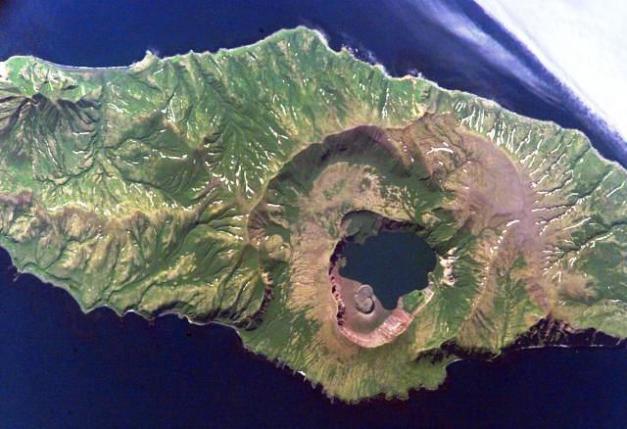 The Zavaritzki volcano on Simushir Island has three nested calderas measuring 10, 8 and 3 km in diameter.  The smallest caldera is also the most recent one.  It is filled with the Biryuzovoe Lake with a surface some 40 m above sea level.  There was an earlier caldera lake at 200 m above sea level.

The volcano emplaced a pair of domes in the 20th century decreasing the size of the current caldera lake.  The first was emplaced 1916 – 1931.  The most recent dome is a 360 m wide lava dome emplaced following explosive eruptions in 1957.

No fumarole activity observed during aerial inspection in Sept. 1980.  A 1989 overflight Jan. 1989 observed strong gas emissions near the 1957 dome.

VOGRIPA carries the caldera-forming eruption as 20,000 years ago with a bulk DRE volume of 80 km3.  This produced an estimated 200 km3 over the course of a VEI 7 eruption.  My guess is this either the first or second caldera. 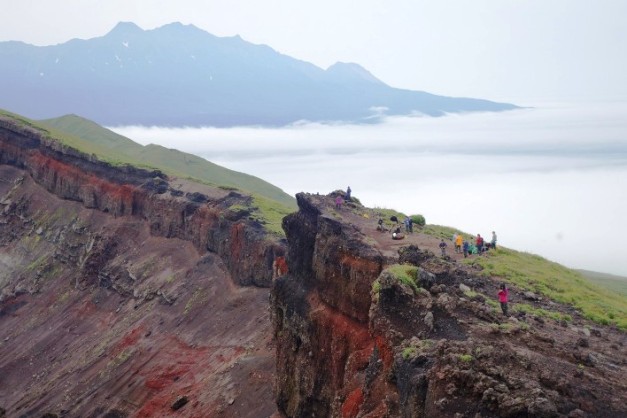 Standing on the inner caldera rim of Zavaritzki Caldera looking south. Milna Volcano and Goriaschaia Sopka are in the background. Milna is the larger volcano to the left. Sopka is the smaller dome on the western flank. Image courtesy Eugene Kaspersky Aug. 2014.

Post caldera products are mainly dacitic pumice.  There is an inter-caldera lake which has varied in level over the years.  There was a resurgent dome that grew after the most recent caldera forming eruption.

More recent eruptions took place between 1916 and 1931.  These built a new dome inside the inner caldera.  The most recent eruption took place in 1957.  This also built another dome and produced lava flows.  Strong fumarolic activity continues in the northern part of the caldera. 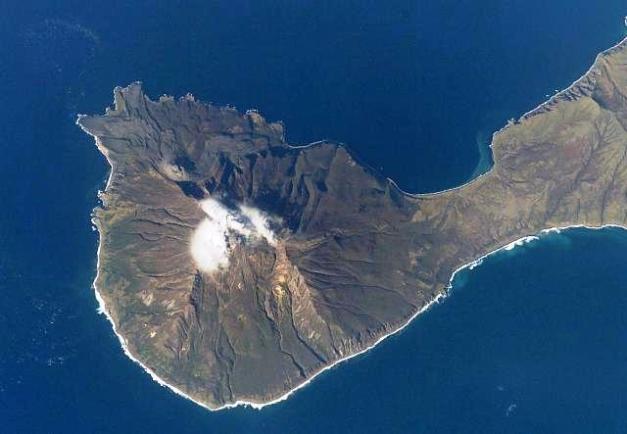 Milna volcano and Goriaschaia Sopka Lava dome at the 11:00 position on the western flank. West is to the top of the photo. Image courtesy Smithsonian GVP.

Milna (Milne) is the southernmost volcano on Simushir Island.  It has the Goriaschaia Sopka lava dome on its NW flank.  The volcano is 1,500 m high.  It is topped with a 3 km caldera breached to the SE.  As such, the volcano is a somma, with a small central cone and andesitic lava dome.  It is the highest point on the island.  There are lava flows from the cone 4 – 5 km to the sea.  It has erupted andesites and basaltic andesites.

The caldera formed the height of the most recent glaciation and is now glacier filled.

Goryashaya Sopka (note the alternate spelling) volcano from the Sea of Okhotsk looking east. Actual vent is in the foreground, devoid of greenery, and a bit difficult to separate from the larger Milna volcano in its immediate background. Image courtesy http://www.belousov.pro/gor-kur.jpg

Either way, it is a historically active andesitic lava dome with numerous fresh lava flows with marginal levees.  Some of these also stretch to the sea.  This dome is thought to have formed as recently as the late 19th century.  The last eruption was 1914.  There were five explosive eruptions 1842 – 1914

There are at least six volcanic eruptions from this vent, size unknown, since 1842.  The most recent eruption is suspected in 1944.

Like the rest of the Kurils, tectonics of subduction of the Pacific Plate beneath the Okhotsk Plate drives volcanic and earthquake activity in the central Kurils.  Crust thickness is less than 15 km beneath the island.

The central Kuril Islands are also subject to frequent great earthquakes.  There are 20 – 22 tsunami deposits recognized on Matua Island (Sarychev volcano) over the last 3,300 years.  Average reoccurrence is around 150 years.  Simushir Island has recorded 34 – 35 tsunami deposits over the last 2,350 years, or about 65 years between events.  Tsunamis at least 11 m higher than modern tsunamis in 2006 and 2007 occurred every 300 years or so.  Most recent runup from the 2006 – 2007 earthquakes is in the 5 – 15 m range.  Timing of volcanic activity does not seem to be connected to these frequent earthquakes, though there is no shortage of Russian-authored papers that attempt to make that connection. 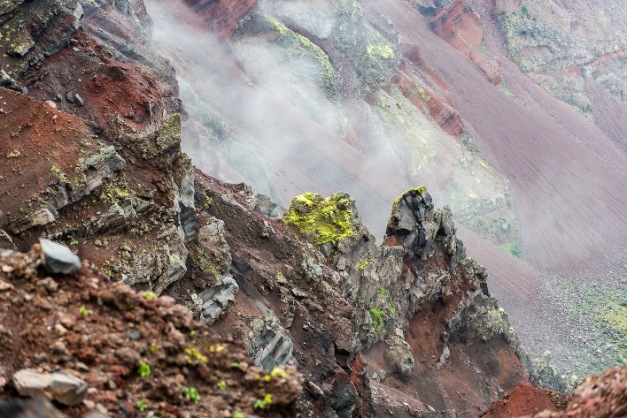 Inner caldera slope of Zavaritzki caldera showing layered debris. Suspect the mist is not related to active fumaroles, as I have not seen any in other depictions of this trip. Image courtesy Eugene Kaspersky, Aug. 2014.

Kuril Island volcanism is well represented by the 4 – 6 volcanoes on Simushir Island.  You have a pair of calderas, the largest with recent activity, and low velocity zones below both.  You have at least two other somma volcanoes in Milne and Prevo Peak.  Finally, you have three dome complexes, two in the caldera systems, and the third on the flanks of Milne at Goriaschaia Sopka.  The most recently active volcanoes are Goriaschaia Sopka and Zavaritzki.  While Prevo Peak is currently dormant, given the availability of fresh, hot magma due to ongoing subduction underneath the island, future activity on this island would be no surprise.