What is an Intraplate Earthquake?

Intro:  I wrote this some 12 months ago, a couple months after our M7.1 intraplate earthquake here in Anchorage.  This seems a good time to revisit what happened and why.  As usual, there are more questions afterwards than before.  Cheers –

The M 7.0 Nov. 30, 2018 earthquake here in Anchorage was described as an intraplate earthquake.  The official USGS description of the quake places the quake within the Alaska – Aleutian subduction zone, on a fault within the subducting Pacific Plate rather than the shallower boundary beneath the Pacific and North American Plates.  This quake was not related to movement of any of our multiple shallow faults near the surface.

This led to no small amount of additional head scratching over related questions:

Researching these questions led me to a couple sources that referred to the quake as an exotic one.  With all the active geology and tectonics up here the notion that we are sitting on a region that can fire off what someone referred to as an exotic quake is surprising.

Perhaps it is time to take a look at intraplate earthquakes.

Schematic of depth of the top of subducting Pacific Plate beneath Anchorage. The multiple lines to the west of town illustrate the binding dive of the plate into the mantle. Image courtesy Temblor.net

The quake was 13 km north of Anchorage at a depth of 41 km.  While its location was close to that of the 1964 quake, and both were at roughly the same depth, they are not similar.  The 1964 quake was a compressional event, a megathrust earthquake along the plane separating the overlying North American Plate and the subducting Pacific Plate.  The 1964 quake uplifted seafloor and dropped parts of the coastline.  The rupture was around 1,000 km long, 300 km wide, and shoved a portion of the subducting Pacific Plate 20 m to the NW beneath Alaska. 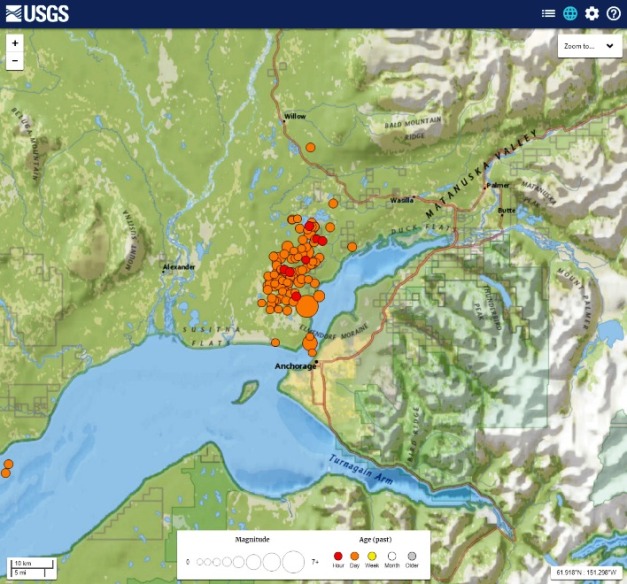 The Nov 2018 Anchorage quake was caused by E-W tension along a roughly N-S trending fault within the Pacific Plate.  The best explanation for the quake was a downward bend of the Pacific Plate into the mantle.  Think of it as the bend in the plate as it changed direction from near parallel to the North American plate down into the mantle.  Slab depth contours get closer together to the NW of the quake location.  Aftershocks are also aligned generally N-S consistent with the proposed orientation of the fault.  Finally, the slab in this location is in tension on top and under compression at the bottom, as it is bent, changing its direction under Anchorage and to the west of Anchorage.

Jan 2018 M 7.9 intraplate earthquake in the Gulf of Alaska. This one was also felt in Anchorage. This earthquake activated a strike-slip fault near the subduction zone on the upstream portion of the Pacific Plate. Image courtesy Nature.com

What is an Intraplate Quake?

Perhaps 5% of earthquakes take place within a plate, away from plate boundaries.  The larger deep intraplate earthquakes seem to take place along zones of weakness within plates thought to be ancient faults or rift zones.

We do understand relatively well smaller quakes that are due to uplift, subsidence, injection or removal of localized magma reservoirs.  Injection or removal of liquids into shallow rock structures is known to lubricate and activate previously unknown and inactive fault lines.  At some level we understand intraplate earthquakes as plates are bent into subduction zones, though there is no way to predict them yet.  But the deeper ones are not well understood at all, and they will be the subject of this post.

A 2007 book edited by Stein and Mazzotti entitled Continental Intraplate Earthquakes: Science, Hazard, and Policy Issues is perhaps the most comprehensive treatment of the subject.  While I do not have access to the book, I have found several presentations and papers by the authors and editors.

The problem with intraplate quakes is they are not readily explained by plate tectonics.  Deformation within plates is slow compared with more rapid movement along the boundaries.  Geologists don’t know what causes these quakes, how often they take place, and how dangerous they are.  While there are several theories, some of them quite good, this is still very much a work in progress.

The emerging picture shows earthquakes taking place around faults which are active for some time, and then become inactive for a long time.  Continental plate interiors have a number of seismic zones that are often associated with structural features like rifts, passive margins, sutures, etc.  Large events in the M 6.5 – 7.5 range take place greater than every 500 years.  This can be much longer.  GPS measurements of platewide intraplate deformation is less than 1 mm / yr.  If there is no deformation, what is causing the quakes?  It is not clear why seismicity is localized on any particular feature among many or if it migrates with those features.  We don’t understand the driving forces behind these quakes or the structure of the seismic zones

This situation is comparable to that of understanding plate boundary quakes before plate tectonics was discovered.

NW Europe intraplate quakes are concentrated along the Rhine Graben.  There is some similarity to the New Madrid region in central North America.  Largest known earthquakes are smaller, with a 1356 near Basel quake near M 6.0 – 6.5.  GPS measured extension is at most 1-2 mm/yr, not significantly different from zero. 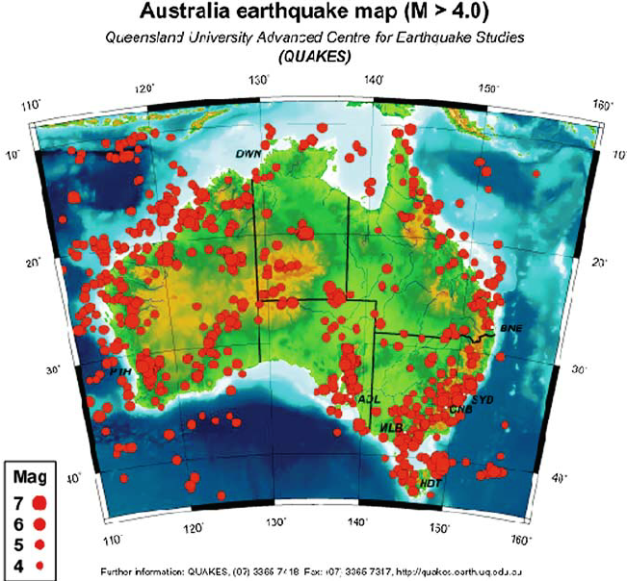 Australian intraplate quakes can get as large as M 7.0.  There is a long recurrence time for faults.  Plate deformation is less than 1 mm/yr.  These quakes may migrate between faults rather than recur.  They are relatively diffuse.

The Hungary – Pannonian Basin has diffuse seismicity and the quakes migrate.  Maximum observed quake is M 6.2 with an M 7 expected sometime in the next millennia based on seismicity.  GPS movement is 1 – 2 mm/yr shortening of the basin.

The most studied of these zones is the New Madrid zone in central North America.  And this has led to some surprising results over the last 20 years.  The 1811 – 1812 quake series size was revised downward to a maximum of M 7.2 based on building damage.  Seismicity has revised maximum earthquake sizes very 550 – 1100 years for quakes greater than M 7.  Seismicity appears to be associated with the failed Reelfoot Rift but GPS measurements of deformation is less than 1 mm/yr.  It is not clear why seismicity is localized at the New Madrid location.  Worse, there is essentially no motion measured, meaning previous predictions of quakes every 500 years are no longer valid.  Finally, it is unclear how long the current series of quakes will last. 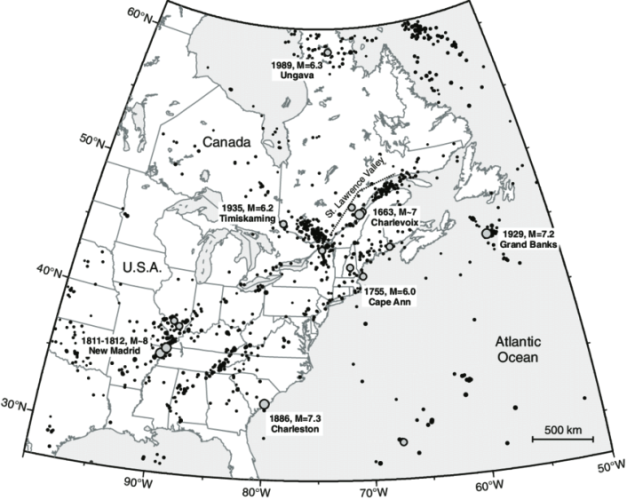 The new view of the region is that it is a complex system of interacting faults.  Deformation varies in space and time.  Past events are a poor predictor for future events.  The current cluster of quakes may be ending and only a few thousand years old.  Current seismicity may be aftershocks from the 1811 – 1812 series of quakes.  Large continental intraplate earthquakes are often episodic, clustered and migrating.

What does this all mean?  It generally means that we don’t know enough about intraplate quakes to confidently predict them or create any regional hazard assessment yet.  This means more observation, more data gathering, and more analysis. 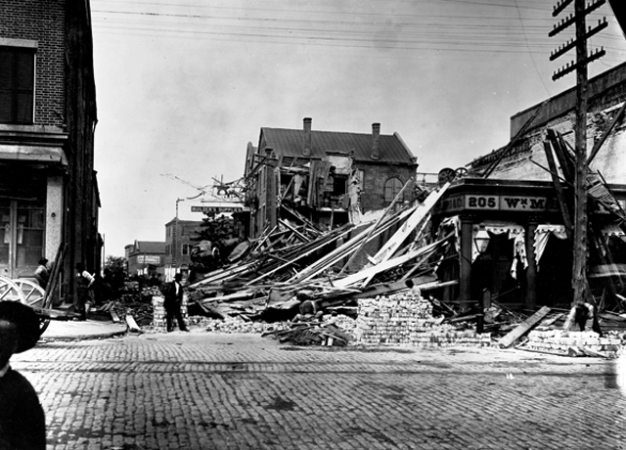 The Jan 2016 Old Iliamna earthquake some 261 km SW Anchorage was also referred to as an intraplate earthquake.  It was relatively deep at 129 km.  The USGS summary of this earthquake described it as an intermediate depth earthquake that represents deformation within subducted slabs rather than slippage at the interface between the plate and surrounding Athenosphere.  Earthquakes have been located to depths of 220 km in this region.  This is a highly active extended region, being the source of the M 9.3 Great Alaska earthquake of 1964.  There have been 12 other earthquakes M 6 or larger within 250 km of this quake since 1960.  The largest before this one was a M 7.0 aftershock in 1965.  The largest intermediate depth earthquake in the region was an M 6.8 120 km SW of this quake in July 2001.  https://earthquake.usgs.gov/earthquakes/eventpage/us10004gqp/executive

The Aug 2011 Virginia Earthquake was an M 5.8 rocked the eastern seaboard of the US, damaging Washington DC.  This region was part of continental conversion when Pangaea formed.  The region uplifted the Appalachian Mountains.  It has ancient faults that sometimes reactivate. 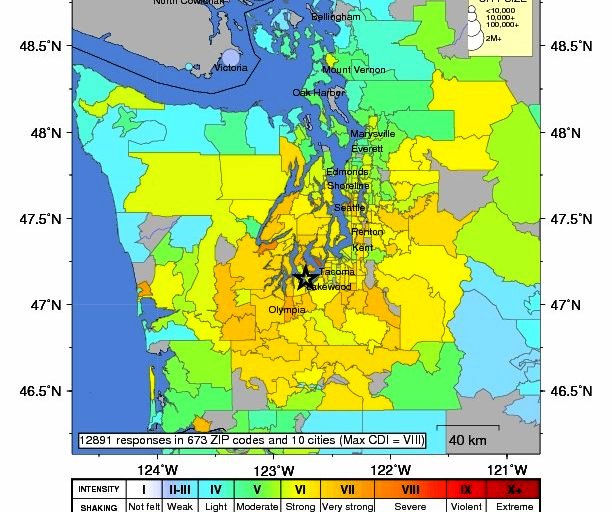 The most similar earthquake to the Nov Anchorage quake was the Mar 2001 Nisqually earthquake was a M 6.8 intraslab earthquake in southern Puget Sound NE of Olympia, WA.  In this one, the subducting Juan de Fuca Plate suffered a deep extensional intraplate earthquake underneath Puget Sound.  This was similar to quakes in 1939, 1946, 1949, 1965 and 1999.  It was 52 km deep, 58 km SW of Seattle and 24 km SW of Tacoma.  The fault involved in the subducting plate was oriented N-S and failed in extension, along the upper portion of the subducting plate.  https://www.eeri.org/lfe/pdf/usa_nisqually_preliminary_report.pdf 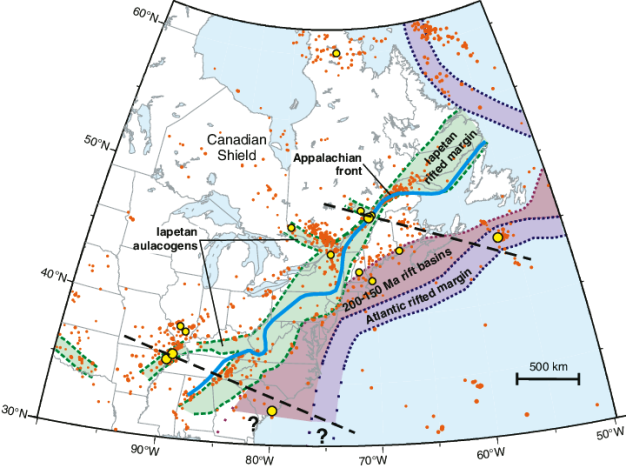 The 1811 – 1812 series of earthquakes near New Madrid, MO were another intraplate earthquakes.  There were three M 7.5 – 7.3 primary quakes Dec. 16 – Feb 7, 1812.  All quakes were followed by a significant series of aftershocks.  Geologic analysis of the region found that it repeatedly produced major earthquakes, including several M 7 – 8 over the last 4,500 years.  Surface faulting has been strike – slip roughly parallel with the direction of the Mississippi River.  The river has cut and removed sediments filling an ancient rift valley.  Several ancient faults with low slip rates within the seismic zone have been reactivated.  This region is tied to intraplate weakness due to an ancient rift zone.  The rift zone was a failed rift that failed to split the proto-North America some 750 Ma and represents a zone of weakness in the continent. 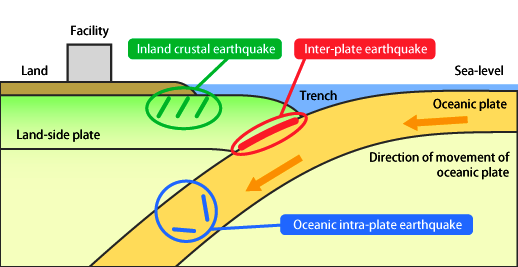 Finally, the answer to my previous questions start to fall out of what we have seen in this post.  For example:

We understand several types of intraplate earthquakes at some level.  These are earthquakes caused by uplift, subsidence, magma injection or withdrawal that we understand based on the local or regional geology.  We know that injection or withdrawal of fluids into or from shallow wells will from time to time reactivate local shallow faults.  We have observed subducting plates rupture at the point where they change direction from relatively parallel with the surface to dive deep into the mantle, but as yet are unable to predict any rupture.  But the other deep, large intraplate earthquakes are a mystery, one supported by seemingly mutually exclusive data. 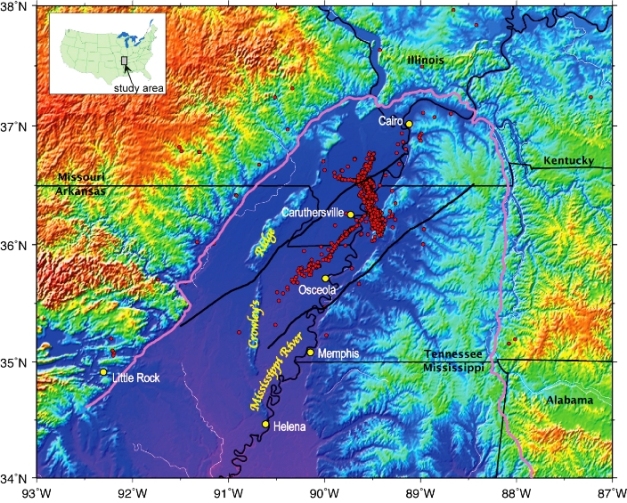 9 comments on “What is an Intraplate Earthquake?”