This is the final of three posts on the East Hokkaido Caldera Field.  It will take a look at the oldest system in the field, the Akan Caldera / Volcanic Field.

Granyia did an outstanding post on this part of the world in 2015, concentrating on the Meakan stratovolcano, its recent activity, locale, and tectonics.  I am interested in how this system came to be, so this post will look a bit farther in the past than her post did.  You can find Granyia’s post here.

The Akan Caldera is partly filled by Lake Akan.  Pyroclastic flows from the caldera-forming eruptions over the last 1.5 Ma are in excess of 100 km3 in volume.

Side view of Akan caldera from the SE. Meakan complex is to the left and Oakan is the prominent volcano to the right. Image courtesy Plate Tectonic Narod.ru.

There are four post-caldera stratovolcanoes in the caldera, with Meakan (Me-Akan or Meakandake) and Oakan still considered active.  Products of these cones are andesites to basaltic andesites.  Three of these are at the SW end of the caldera (Mount Meakan, Fuppushi, and Furebetsu), with Oakan to the NE on the other side of the caldera lake.  Meakan is a stratovolcano group formed by 8 small volcanoes.

Side view of Oakan from the NE. Note multiple lava flows into Lake Panketo. Lake Akan is obscured by the body of Oakan. Image courtesy Plate Tectonic Narod.ru.

The entire region is called the Akan – Shiretoko volcanic chain, part of the SW Kuril arc.  It has nine andesitic stratovolcanoes and three calderas.  The chain is 200 km long, generally oriented SW – NE.  Volcanic activity began some 4 Ma at Akan at the SW end of the chain and has systematically progressed NE.  The activity is related to anticline development moving NE from Akan with magma rising as the anticline progressed.  As this took place, the region has been uplifted by SW migration of the Kuril forearc sliver.

Just as a reminder that nothing in this part of the world goes to waste, Hokkaido Akan Clay can be found online as an ingredient for skin conditioning cosmetics.  This product is weathered pyroclastic or ash fall debris.

Aerial view of Oakan from the SE. Lake Akan is to the left and Lake Panketo to the right. Image courtesy Plate Tectonic Narod.ru.

The Akan caldera is by far the oldest system in this caldera field.  And based on recent activity at Meakan and Oakan, it is still considered active.

The caldera itself is roughly rectangular measuring 24 x 13 km.  It has a complex history of caldera forming eruptions.  There are at least 40 pyroclastic eruptive units, some of which are separated by soils indicating significant time interval between eruptions.  These are grouped into 17 groups.  The 17 groups are chemically distinct.  Some of these units are interlaced between Kutcharo pyroclastic deposits.  The tephras range from 1.46 – 0.21 Ma, indicating caldera-forming eruptions from Akan took place over a period longer than a million years.

The extended period of eruptive episodes which produced tephras and pyroclastics is thought to have something to do with the rather odd rectangular shape of the caldera.  Other than this mention, I was not able to find any additional explanation of how that came to be in the literature reviewed for this post.

It lies at the end of the Akan – Shiretoko volcanic chain in the southern end of the Kuril arc.  This arc is located along an anticline formed by compressional deformation caused by the westward movement of the Kuril forearc sliver.  Recent volcanoes and caldera systems in Hokkaido are clustered within a 50 km2 area at the SW end of the chain.  More than 70 large scale explosive eruptions (greater than VEI 5) took place from this cluster during the Quaternary.  Estimate total output from these large eruptions is in excess of 1,000 km3.  The location of these large-scale eruptions migrated eastward from Akan to Mashu over the last 1.5 Ma. 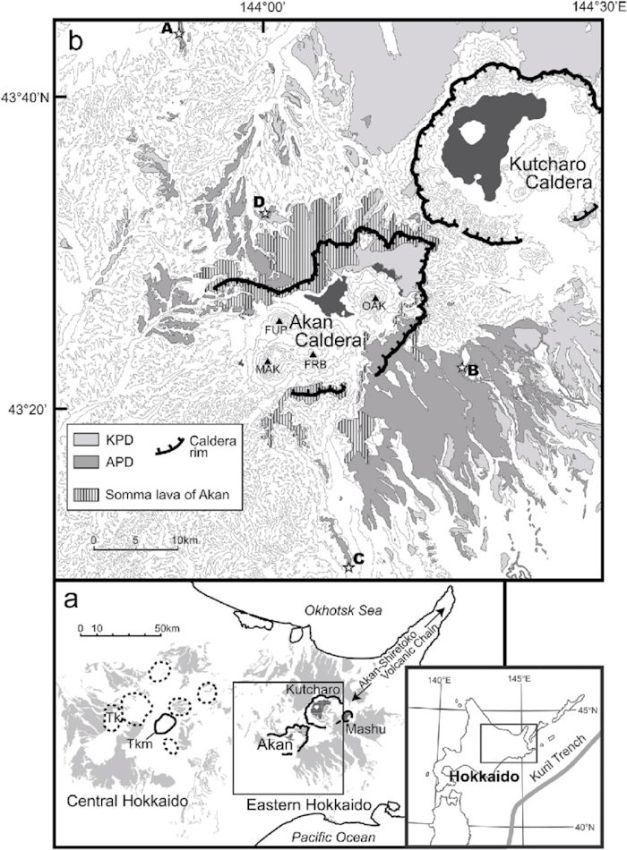 The caldera is built on volcanic somma rocks that date 3.9 – 2.8 Ma, which are found at the rim.  This may be the remains of multiple pre-caldera stratovolcanoes like we saw at Fisher and Atitlan rather than a single large stratovolcano.  There is a discontinuity in time between the ancestral stratovolcano lavas and the start of eruptive groups leading to the thought that the original lavas may be unrelated to the magmas of the caldera-forming eruptions.

There are also a number of ignimbrites from central Hokkaido (Tokachi – 1.46 – 1.30 Ma, Tokachimitsumata, 1.0 Ma, Kamishikaribetsu, 0.75 Ma, and Kamisahigaoka, 0.51 Ma) interlaced with the 17 Akan eruptive groups.  These are chemically distinctive, relatively well dated, and have greatly helped analyzing the stack of eruptive group layers from Akan.

Gravity surveys of Akan led to the conclusion that caldera forming eruptions from Akan came from at least three different locations within the caldera, meaning it is a composite caldera.

Post caldera volcanoes have filled the caldera basin.  Two of these, Meakan and O-akan, are considered active.  This material created several dammed lakes, with Lake Akan being the largest with an area of 13 km2 and a maximum depth of 50 m. 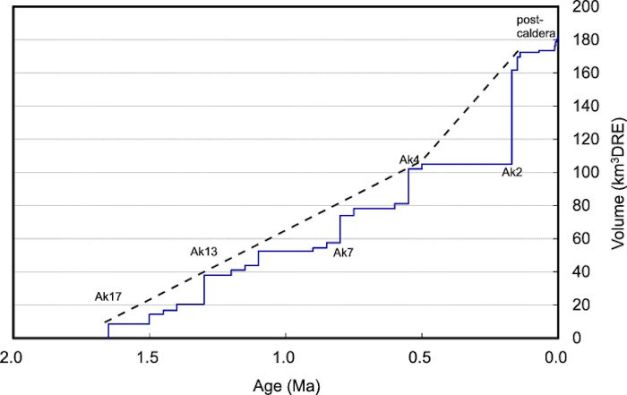 Age vs cumulative volume of Akan eruptive volumes in Dense Rock Equivalent. This graph only includes eruptions from the caldera-forming events and not the ancestral Akan. Image courtesy Hasegawa, et al.

The 17 groups of eruptive debris (eruptive groups) are chemically distinct and separated from one another by a buildup of soils greater than 30 cm thick, indicating long periods of dormancy between each group.  Estimated volumes of most groups are less than 10 km3 dense rock equivalent (DRE).  Four groups (Ak2, Ak4, Ak7 and Ak13) are larger, with Ak2 the largest at over 50 km3 DRE.  Pyroclastic deposits from Akan are interlaced with pyroclastic deposits from neighboring Kutcharo and air-fall ash layers from other activity in central Hokkaido.

Isopatch maps of fall deposits from Akan eruptions. The group numbers are Ak11, 7 and 6. Depths are in centimeters. Image courtesy Hasegawa, et al.

Dating of these deposits (described as exotic in the 2015 Hasagawa paper) finds that activity took place 1.46 – 0.21 Ma.  Erupted materials are primarily dacites to rhyolites.  Petrology of the deposits suggests that each eruptive group is the product of an discrete new magma system rather than a single long-lived magma chamber underlying the entire caldera system.  Each eruptive group represents a relatively short period of activity separated by long periods of dormancy until the next magma pulse arrives.  The longest dormancy of 400,000 years preceded the Ak2 eruptive group, the largest silicic magma group.  Average repose time was roughly every 100,000 years.

Outcrops of various Akan eruptive groups. Note the thick paleosoil layer at the lower right between Ak1 and Ak2. This is 30 cm thick. There are layers not separated by paleosoils at all, indicating closely spaced eruptions. Image courtesy Hasegawa, et al.

Some of the earliest eruptions from Akan took place simultaneously with other explosive eruptions from central Hokkaido.  Clustered large eruptions are not uncommon.  Seven distinct calderas in the Taupo Volcanic Zone erupted around 3,000 km3 of rhyolites 320 – 240,000 years ago.  The last pulse of this had two calderas separated by around 30 km erupt large simultaneous eruptions.  Similar eruptions took place from Kakuto, Aira, Ata and Ikeda in southern Kyushu.  The central and eastern Hokkaido caldera systems are only separated by 50 km and may be driven by regional tectonics of the southern Kuril arc.  Total rate of discharge from these three caldera systems is one of the largest known discharge rates from silicic volcanic system, comparable with Yellowstone and Taupo. 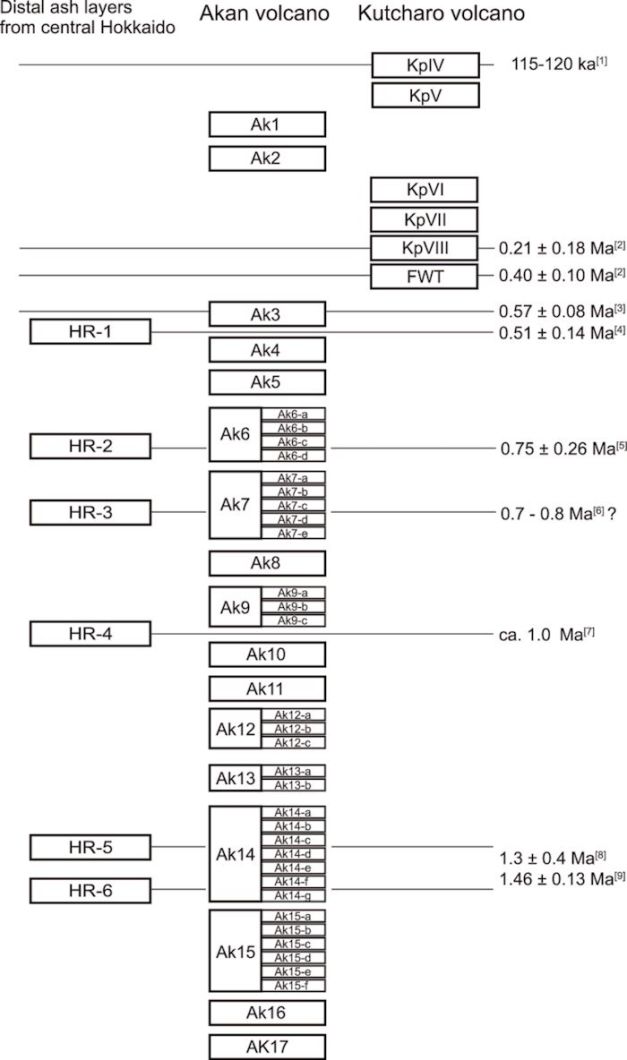 Schematic of ash fall / pyroclastic flow units from Akan. Central Hokkaido layers are HR-*, Akan units are in the center, and Kutcharo Kp* units to the right. Dating is provided at the far right. Image courtesy Hasegawa, et al.

Each eruptive group magma is chemically distinct.  The Hasagawa paper suggests that each of these was generated independently, existed separately, and erupted sequentially from their own magma chambers beneath the 24 x 13 km area of the caldera.  There are banded pumices present, indicating magma mixing was a common process for each group.

Like Taupo, one especially large eruptive unit took place in each eruptive group.  There is little paleosoil present in each group.  Those soils are much thicker between each group, indicating the system was active for a short period of time and needed an extended period for the next magma batch to arrive and evolve. 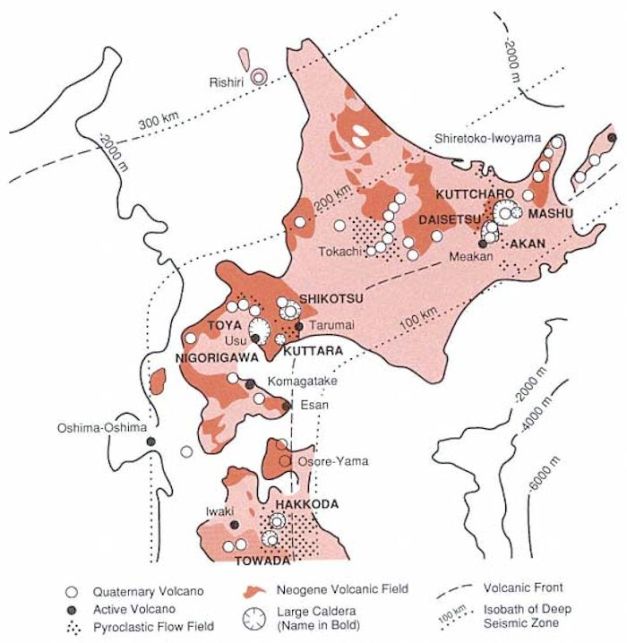 Hokkaido has two volcanic zones active since around 20 Ma.  Subduction related volcanism in western Hokkaido has been taking place since at least 12 Ma, and in east Hokkaido since at least 14 Ma.  Relatively extensive volcanic activity 14 – 5 Ma converged into three primary regions over the last 5 Ma.  The central Hokkaido belt developed along the ancient plate boundary.  East and West Hokkaido are regarded as arc trench systems.  By 1.7 Ma, with the exception of Rishiri volcano, there are no recent volcanoes outside these three fields.  Rishiri itself was last active 18,000 years ago and is considered extinct.

Akan is and example of an active, complex caldera system.  With the follow-on growth of multiple stratovolcanoes following the collapse, two of them currently considered as active, I would still look at this as a dangerous system.  Over the long term, activity is migrating to the NE along the Akan – Shiretoko volcanic chain.  The SW movement of the Kuril forearc sliver is uplifting an anticline, creating a line of weakness in the crust that allows magma to reach the surface easier.  While overall activity continues to migrate to the NE, it is anyone’s guess how much eruptible magma is available for future eruptions. 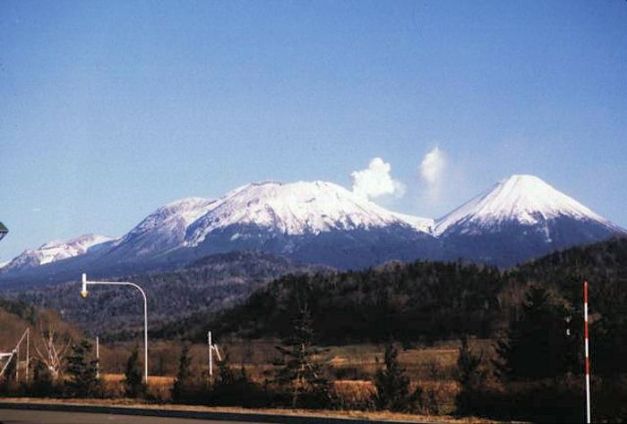