The Vice King of the Caucasus – KAZBEK 🇬🇪

Mt. Kazbek, Gergeti Trinity Church and Gergeti village below. – Says one travel website: “Climb to the Gergeti Trinity Church. This is the number 1 thing to do in Kazbegi – going to Kazbegi and not going to this Church would be… strange”. Quite understandable, looking at this picture postcard view, isn’t it?  (© Jazzanova, via Wikimedia)

I remember, as a teen, I loved rummaging in my mother’s enormous picture postcard collection – what a treasure! There was a photo in it that I never forgot in my life: An old Orthodox church sitting on a ridge high above a village and, behind the church, the humongous END_OF_DOCUMENT_TOKEN_TO_BE_REPLACED

Up and Down and Up She Goes: ISCHIA ISLAND

Ischia (pronounced: ‘Is-kyah) is a densely inhabited volcanic island in the Bay of Naples, on the mid-southwestern coast of Italy, some 30km from the Naples mainland. Most people know that the island of Ischia is of a volcanic nature. Many of them believe that it is just another extinct volcanic cone, layers over layers of lava, piled up throughout distant eruptive periods. Not so! The interesting thing is that it’s not your off-the-shelf volcano grown from a seamount before emerging above the sea surface. Ischia has a distinctly different geological history compared to the island volcanoes we know from subduction zones. And, of course, it is not extinct. END_OF_DOCUMENT_TOKEN_TO_BE_REPLACED

Quite Off the Beaten Track – ASCENSION I. 🇦🇨 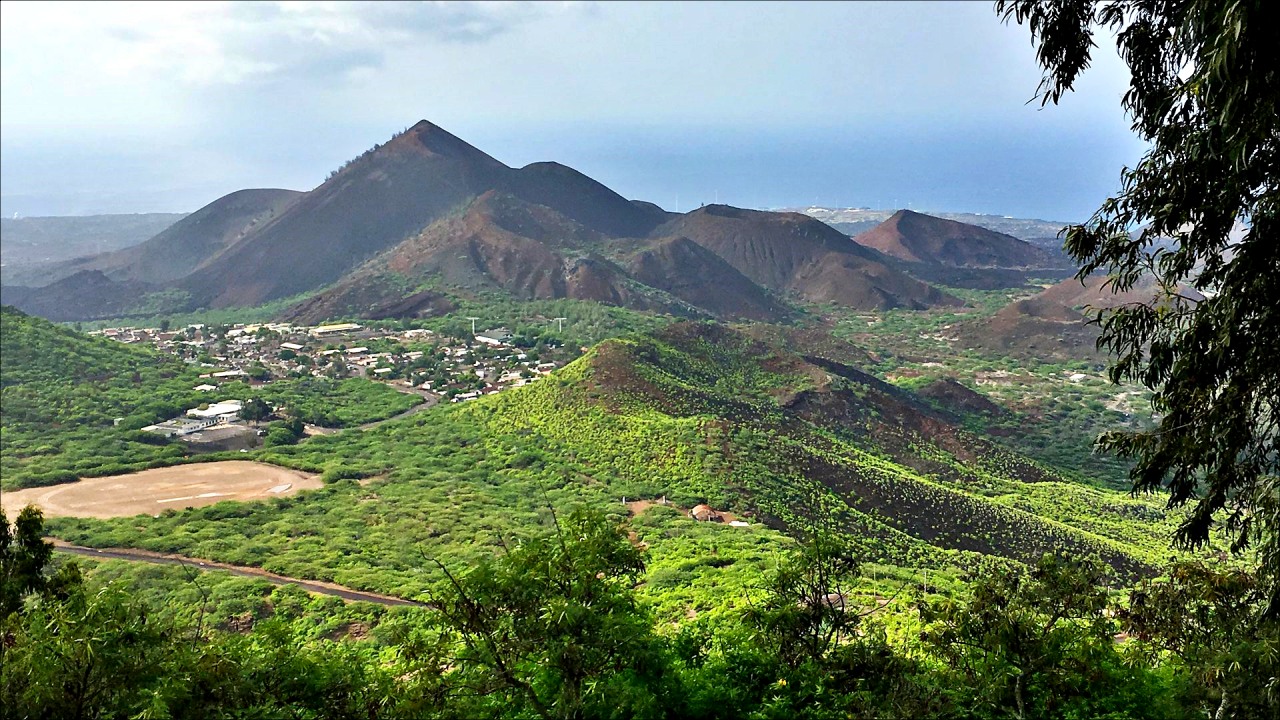 View from Green Mountain across volcanic cinder cones, with Sisters Peak towering over the little town of Two Boats. (© BBC)

“The 7th June anno 1656. Att evening wee arrived att Ascention and anchored on the NW side of the iland. On our rightt hand was a faire sandy bay END_OF_DOCUMENT_TOKEN_TO_BE_REPLACED

So far, when I wrote about volcanoes around the world, I could only dream of ever visiting them. Researching for my first Nisyros post, though, it occurred to me that the idea of a short holiday there was not entirely out-of-bounds. It didn’t take long and I had convinced daughter & granddaughter to come with me. We travelled to Nisyros in October, and, what can I say – it was a wonderful, if too short a holiday! Here are some impressions, thoughts and photos from our visit. END_OF_DOCUMENT_TOKEN_TO_BE_REPLACED 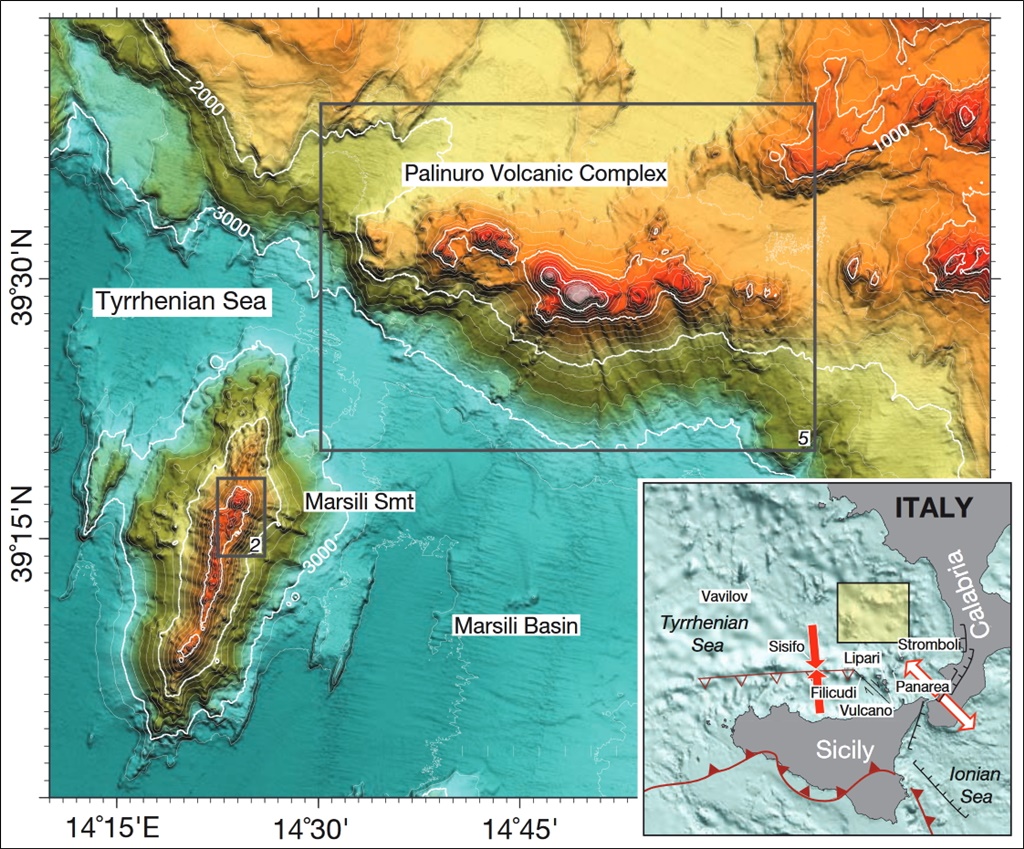 Bathymetry of the southern Tyrrhenian Sea. The inset shows a schematic representation of the tectonics affecting southern Italy. (from: M. Ligi et al., 2014)

On and off during recent years I caught some headlines about submarine volcanoes in Italy but never got round to read those studies. Since I came across some really Doom-&-Gloom-The-End-Is-Nigh videos I decided to have a closer look at these. And I’ll give the answer beforehand: Yes there is a real risk. And, yes, there is an awful amount of fearmongering. END_OF_DOCUMENT_TOKEN_TO_BE_REPLACED

“After another seven days, a fire exploded in the vicinity of the parish of Santo Amaro, where it opened two mouths of fire, such as two great ravines of fluid material, and with such force that on the second day, we encountered more than a moio of fields of lava in the direction of the homes, forcing the people to flight; the vicar, Rev. Amaro Pereira de Lemos, lost his senses and his sister D. Anna Maria de Lemos went crazy.“
(Father João Ignácio da Silveira, May 1808) END_OF_DOCUMENT_TOKEN_TO_BE_REPLACED

Back in the 1980s I have travelled this part of Romania extensively, we hiked and hitch-hiked through villages and landscapes in 4-week holidays for several years – but never did we know there was a volcano – and such an interesting one at that! The travel guide books didn’t mention volcanoes and the locals didn’t care for geology much. I guess this has changed now; a volcano in the neighborhood has always proved a recipe for visitor attraction! END_OF_DOCUMENT_TOKEN_TO_BE_REPLACED

NISYROS of the Twelve Islands (Greece)

Nisyros, view into the caldera with Stefanos Crater. (© stupiduglyfool, via mapcarta.com)

How many of the millions of sunshine-hungry European travellers to Greece would have known that there is the attraction of a fuming active volcano in their favorite holiday destination? And I am not talking famous Santorini here, but a little island with only a few hundred residents in the far south-east of the country, near the Turkish main land. END_OF_DOCUMENT_TOKEN_TO_BE_REPLACED

END_OF_DOCUMENT_TOKEN_TO_BE_REPLACED 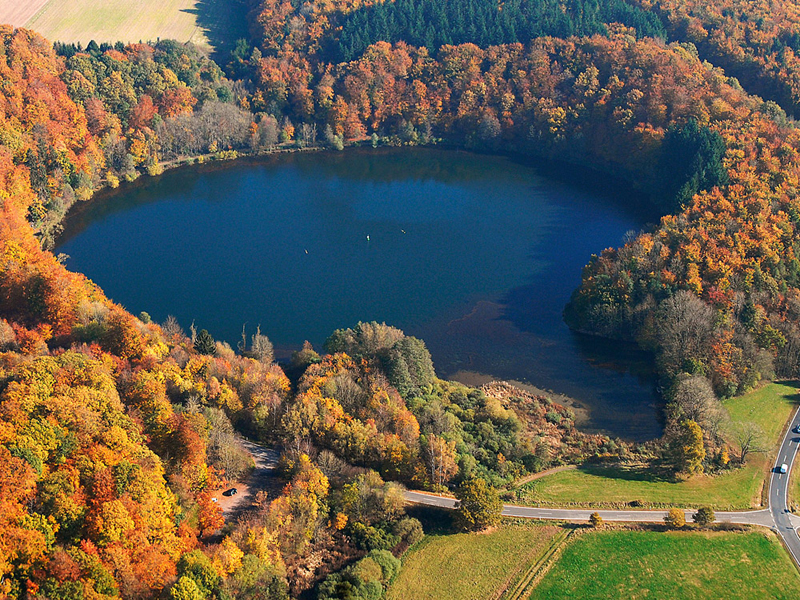 The now beautiful Holzmaar erupted 25 000 years ago. Sediment drill cores from here are used in comparative studies in both the Greenland Ice Sheet and Ice Core projects. (Photo: geopark-vulkaneifel.de)

A maar is a hole in the ground, of volcanic origin… what else?… caused by interaction with water… That was about all I knew about maars when I prepared for this year’s holiday, in the German Eifel maars area (Vulkaneifel, Rheinland-Pfalz district). I did not expect to find a great lot of evidence for former volcanic activity. Probably all covered by sediments or eroded, mined away or grown over – that’s what I thought. Mind you, it was not the famous Laacher See caldera I visited which had produced a VEI 6 eruption some 13 000 years ago. END_OF_DOCUMENT_TOKEN_TO_BE_REPLACED