What is a volcano? If you ask kids all over the world to do a drawing, you will get quite similar results. A steep mountain with “fire” erupting from the top and sometimes lava streams running down it´s flanks.

Kids drawing found on the net

Let us deal with the very basics about volcanoes. I know it is much more complicated but everyone needs to start with basics first in order to start to understand. This is part of a talk I held at the Ars Electronca Center on April 3rd to explain the origin of volcanism, how volcanoes work and why each of them is different. ( http://www.aec.at/center/2014/03/20/dsl-vulkane-2014/ )

By definition a volcano is a geologic structure formed by magma welling to the surface. The molten rock are called magma as long as it is still below the ground. As soon as the material reached the surface, it is called lava.
The name volcano originates from the Italian Island Vulcano on which the ancient Romans thought their God of Fire Vulcanus would have his smithy.

Volcanism is not unique to earth. Scientists were surprised when the Voyager probe sent back images from Jupiters moon Io and they noticed they saw an erupting volcano in the image. We now know the Mares on the moon are formed by ancient lava. Just a few weeks ago new facts about very recently erupting volcanoes on Venus and why the volcanoes there are so different, made the news. The highest mountain of the Solar Syste, Olympus Mons on Mars is a volcano. Cryovolcanism was detected on several moons like Saturn`s Titan and Enceladus or Neptun`s Triton.

Many scientists think nowadays, that life might have come into existence close to submarine hydrothermal vents. So volcanism might be the culprit for causing life. As long as volcanism seems to exist on so many bodies in the solar system it might very well exist on countless exoplanets and their moons. In case the assumption that life first started on Earth, close to hydrothermal vents, is correct, this heightens the chance to, some day, find life elsewhere in the Universe.

Each volcano is different, The type of lava it produces is different. The shape and height and of course the location is different. In order to start understanding lets take a closer look at our home planet itself.

Below the hard surface of the earth there is the mantle made of liquid material. Please note that the proportion of the surface compared to the rest is not like an oranges skin to the orange but much more like an apples skin compared to the rest of the fruit. So we are effectively walking on rather thin ground.
The layer forming the surface is thicker below continents and much less thick below the oceans. The very first pieces of earth which hardened billions of years ago are called cratons and those are naturally the parts were the crust is thickest.

We already took a look at the mantle. Scientists found that there are plumes rising upward inside this mantle. 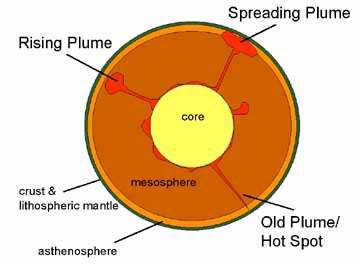 Image from http://faculty.weber.edu/bdattilo/shknbk/notes/htsptplm.htm where you can also find a short discussion of hotspots and mantle plumes.

Above such a plume you may find volcanoes. Hotspot volcanoes are typically shield volcanoes. Flat mountains with a broad base, not like the steep cones kids like to draw.
As long as the crust moves above the hotspot, island chains are being formed, like the Hawaiian Islands and the Midway Island for example.

The Canary Islands might be due to hotspot volcanism too, but some scientists I talked to when I was there last year, claimed it is probably more complicated.

Note that Mars has no subduction volcanism as long as it has no moving tectonic plates. )

Antonio Snider-Pellegrini’s Illustration of the closed and opened Atlantic Ocean (1858).

In 1912 German Scientist Alfred Wegener came up with the idea of continental drift. During his lifetime he was a well known meteorologist but his new idea was debated. In the 1950ies scientist started seeing Alfred Wegeners point and only in the 1970ies the fact of continental drift and tectonic plates became generally accepted and commonly known. Chryphia found a neat movie on this subject.
Paleo Geographic from http://sos.noaa.gov/What_is_SOS/index.html

The illustration shows the plates and where the subduction zones are situated. Subduction happens around the famous Pacific rings of fire. But not only there. Italys active volcanoes are caused because the African plate dips below the Eurasian plate and starts melting. Along the main subduction zones of North and South America you will find chains of volcanoes around 100km inland. The volcanoes there “reuse” material which had been forming a crust millions of years ago. Water is been pulled down along with the sediments. A mixture of water and rock always makes a volcano rather explosive. Subduction volcanoes are typically stratovolcanoes with the well known shape we all associate with the term volcano.

Illustration of a subduction volcano. 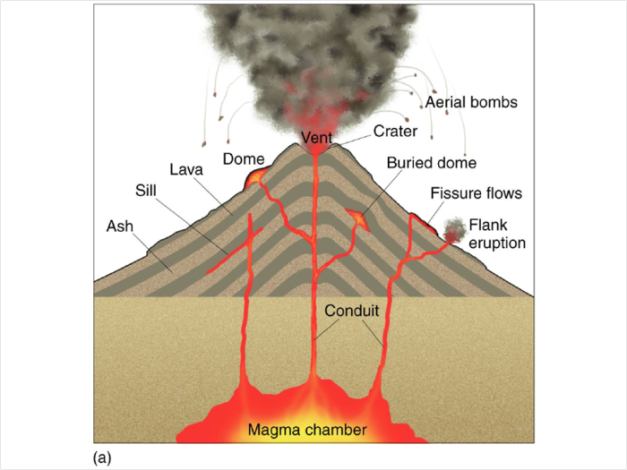 Illustration of a volcano. 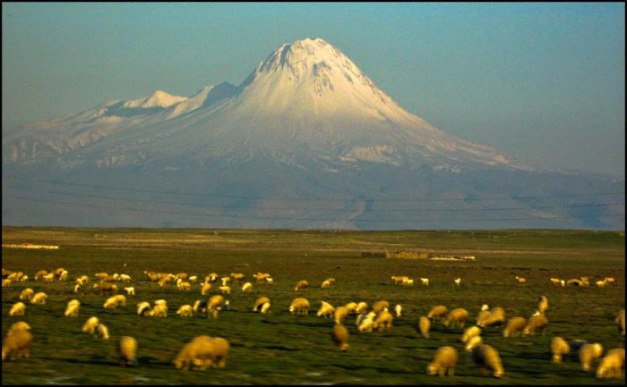 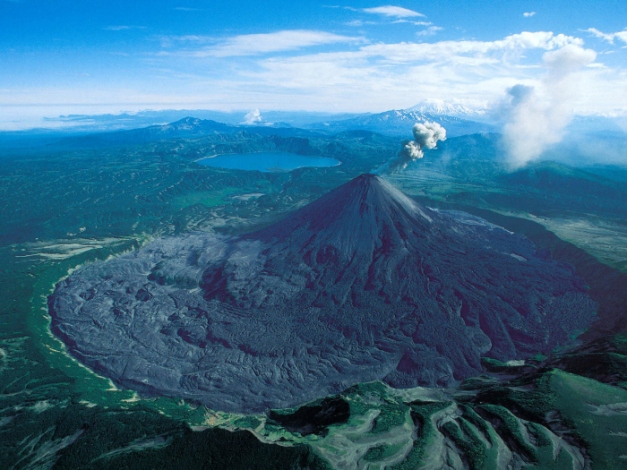 Spica
ps: There will be more parts of volcano basics which are written to help newbies understand the very basics of volcanism and why we are so fascinated by the topic.

One comment on “Volcano – a mountain that spits fire? Volcano basics part 1.”