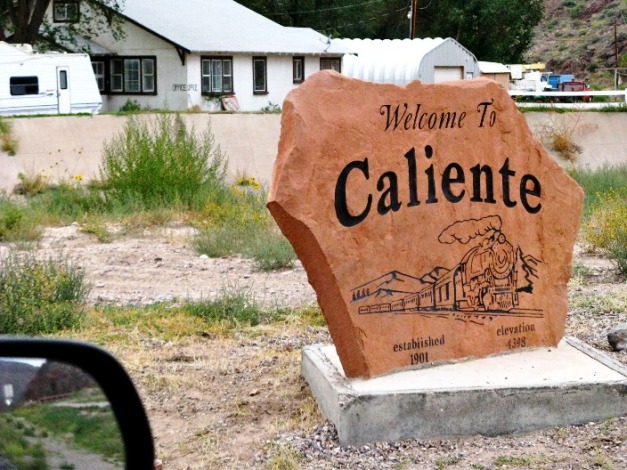 Ran across an article in PhysOrg a few years ago that described a caldera flare-up in Nevada – Utah that began around the same time as the San Juan Caldera field in southwestern Colorado, some 38 – 18 Ma.

I wrote about the San Juan Caldera field nearly three years ago in a VC post located here:  https://volcanocafe.wordpress.com/2013/12/23/what-happened-at-the-end-of-the-eocene/

Imagine my surprise to discover that there was a concurrent caldera outbreak in Nevada and Utah around the same time.  And the outbreak in those states ends up being more widespread and produced more ignimbrite volume than the one in Colorado.  The Colorado activity stretched from 40 – 25 Ma.  The Nevada – Utah activity appears to be a little more recent – 38 – 18 Ma. 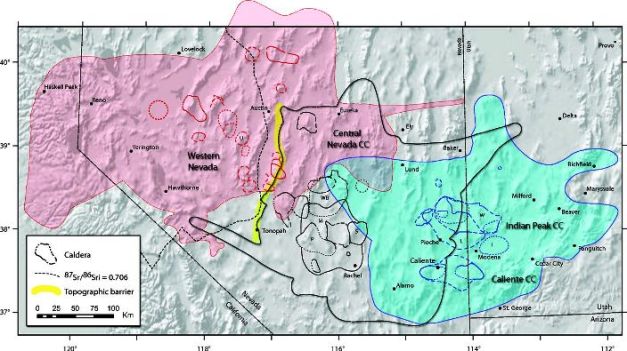 As you look at the Southwest / Western US you can find at least five volcanic fields including a number of calderas stretching from Colorado to Nevada and south into the New Mexico – Arizona border region.  Ages of the caldera ignimbrites range generally from 40 Ma to perhaps 5 Ma, with the movement of eruptions generally toward the South and west over time.

In south central Colorado, we have the San Juan Caldera field mentioned in the article linked above.  It contains at least 15 calderas including the La Garita caldera, which at the time was considered to be the source largest known eruption in the US at some 3,000 km3 around 28 Ma. 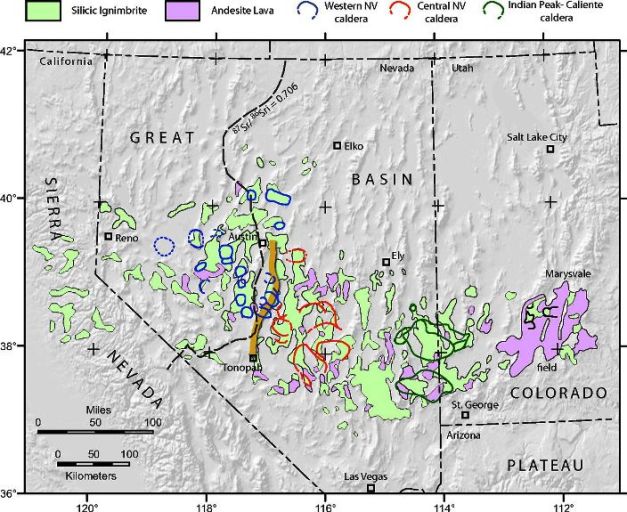 Map of ignimbrite fields in Nevada and Utah. Marysvale volcanic field is in purple to the lower right http://geosphere.gsapubs.org/content/9/4/864.abstract

To the west in south central Utah, we have the Marysvale Volcanic field.  It consists of perhaps six calderas up to 20 km in diameter active some 27 – 18 Ma.

Next caldera field to the west straddles the Nevada – Utah border generally due west from Marysvale.  It is called the Indian Peak – Caliente ignimbrite field.  This field was active 36 – 18 Ma.  It consists of at least 20 calderas measuring as much as 60 km in diameter.  Largest eruption ejected around 5,900 km3 covering an area of 32,000 km2.  There are at least seven eruptive units larger than 1,000 km3.  Estimated ignimbrite volume are estimated at 33,000 km3.  Rhyolite magmas were erupted in more recent times out of the southern portion of the complex creating around 10,000 km3 of additional ignimbrites.

The Central Nevada ignimbrite field is also described as the western portion of the Indian Peak – Caliente ignimbrite volcanic field described above.

Final Nevada volcanic field is the Western Nevada Volcanic Field.  It is described as the western third of the belt of calderas described in previous paragraphs.  23 calderas and their tuffs have been identified.  There are at least another 14 voluminous ash-flow tuffs identified without known sources, which means there may be that many additional calderas yet to be identified.  Caldera diameters are all over 12 km with the largest measuring 35 km in its long axis.  Activity took place between 34 – 23 Ma.  It was clustered into five 0.5 – 2.7 Ma long episodes separated by quiet periods of 1.4 Ma.  Intermediate to silic lavas preceded caldera formations by 1- 6 Ma.  There are at least four tuffs with volumes greater than 1,000 km3.  One of them perhaps 3,000 km3.

The final caldera field is found straddling the border of Arizona and New Mexico to the south.  It is located mostly in southwest New Mexico.  This is the Mogollon – Datil volcanic field.  It was active 35 – 21 Ma.  There are at least 14 calderas identified with eight tuff units larger than 100 km3 identified.  The largest caldera measures some 40 km in diameter.

Cross section of layered tuffs in Indian Peak – Caliente eruptions. Wah Wah Springs is the base and thickest layer http://geosphere.gsapubs.org/content/9/4/864/F28.expansion.html

So how did all this caldera activity take place through what would be a relatively thick tectonic plate?   At the time, the rifting that the Basin and Range part of the western US had not yet begun so the magmas had to make their way through some 70 km of North American Plate.

It appears that in the Indian Peak – Caliente ignimbrite field erupted two different types of magmas.  The initial portion is referred to as “monotonous intermediates’ – uniform, unzoned dacitic ignimbrites.  They tended to be cooler and water-rich.  The later portion is referred to as “trychydacitic Isom-type tuffs” – also uniform but enriched alkali-calcic tuffs.  These tended to be hotter and drier.

The magmas appear to have worked their way into chambers 30 km or so in diameter some 5 – 10 km below the surface.  These cooled, were mixed, some crystallization and were remobilized by new injections of basalt from deep in the mantle.  After a period of time, the covering crust structurally failed due to either faulting or heating and the eruption took place.

As I read the literature, the calderas were for the most part not repeat offenders, especially in the Central and Western Nevada portions of the belt.  While there are some resurgent domes in the old calderas, there are also many without the domes.  One paper noted that especially in the Western Nevada volcanic field, only the upper portions of the chambers erupted and they retained a considerable amount of magma after tuff eruptions.

Subduction history of Farallon Plate under the western US over the last 100 Ma. Screen capture from Brunsvik et all.

As with Colorado (the San Juan Caldera Field), the tectonics of this event is related to flat plate subduction of the Farallon Plate under the North American Plate.  As long as the plate was traveling parallel with the bottom of the North American Plate, all was relatively quiet.  However when the plate started subducting in what is called slab rollback or flat plate rollback, significant magma influx into the region took place.

Slab rollback or flat plate rollback describes the action of a subducted plate to move deeper into the mantle, much like the edge of a ski digging uncontrollably deeper into the snow or water.  Matt wrote about this in VH some 18 months ago in relation to flat plat subduction in Chile.  https://volcanohotspot.wordpress.com/2015/03/09/things-that-affect-subduction-volcanism-flat-slab-subduction/

Conceptual east-west cross-section though the middle Cenozoic orogenic plateau, or Great Basin altiplano, at ~38.5° N showing the unusually thick crust, especially beneath the Indian Peak–Calieinte caldera complex (IPCC). The crust probably was somewhat thinner beneath the Central Nevada caldera complex (CNCC) and thinner still farther west on the western slope of the altiplano beneath the Western Nevada volcanic fi eld. The western Great Basin is underlain by Phanerozoic accreted terranes whereas the eastern part is underpinned by felsic Proterozoic basement. Note the change in vertical scale at sea level. Figure modifi ed from Best et al. (2009, their figure 17). http://geosphere.gsapubs.org/content/9/6/1562/F3.expansion.html

Original volcanic activity due to Farallon subduction was a typical volcanic arc in the Sierra Nevadas.  This took place some 100 Ma.  50 Ma later the subduction had transitioned to flat plate subduction.  By 25 Ma, slab rollback was well under way and a significant supply of melt found its way to the surface.  By 5 Ma, volcanism had stopped and the extension of the Basin and Range region of the western US became the dominant tectonic process.

It remains to be seen how the extensional tectonics of the Basin and Range region of the western US will open that area for intra-plate volcanism.  There are portions of north central Nevada with the plate thickness as thin as 20 km.  http://crack.seismo.unr.edu/geothermal/Heimgartner-GRC-2006.pdf 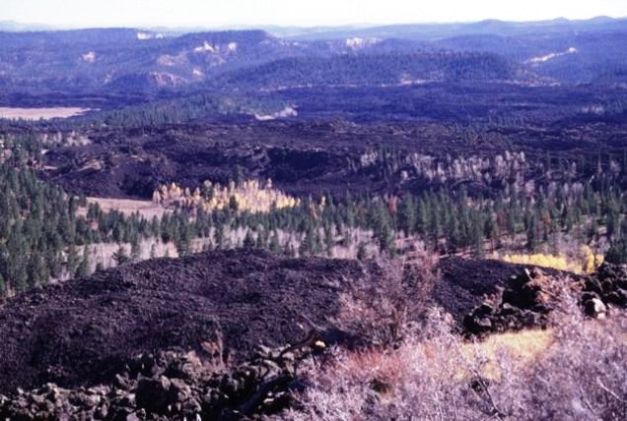 One slightly off topic but related geologic event in the region was a massive landslide of volcanic debris some 21 Ma called the Markagunt gravity slide near Panguitch Lake, UT.  The slide covers an area measuring 90 km by 40 km and hundreds of meters to perhaps a couple kilometer thick in places.  The debris slid 30 km or more.  The majority of debris that slid appears to be ignimbrite pyroclastic flow emplacements.  The slide also destroyed volcanic cones in the region, shearing km3 sized chunks off them while it flowed downhill.  Slope was not particularly steep at only a couple degrees downslope.

Conditions that led to the slide include a thick wedge of pyroclastic debris; some sort of weak layer at its base, in this case clay-rich sedimentary rock; a magma injection underneath the area that inflates the area (one of our 30 km diameter magma reservoirs perhaps?); and finally faults and fractures that compromise the strength of the sheet about to flow.  The landslide was triggered by injection of massive amounts of magma which inflated the ground above the magma chamber creating the slope for the landslide.

Speed of the slide was very fast at over 150 km/hr.  It was fast enough to heat underlying debris, melting it into glass due to friction of movement.

The Markagunt gravity slide is the largest known slide on land anywhere on the planet.  It ties in size with the Heart Mountain gravity slide in NW Wyoming that also took place in an active volcano field with many of the same characteristics.  http://arstechnica.com/science/2014/11/one-of-worlds-largest-landslide-deposits-discovered-in-utah/

The extensive caldera activity in the desert southwest of the US is a relatively newly identified feature of evolution of that part of the continent.  And it appears that the closer geologists look at the region, the more catastrophic volcanic activity they have discovered.  Additionally, the sheer volume of erupted materials led to a similarly catastrophic landslide down what was not a particularly steep slope.  This serves as a warning for similar volcanic regions such as Chili. 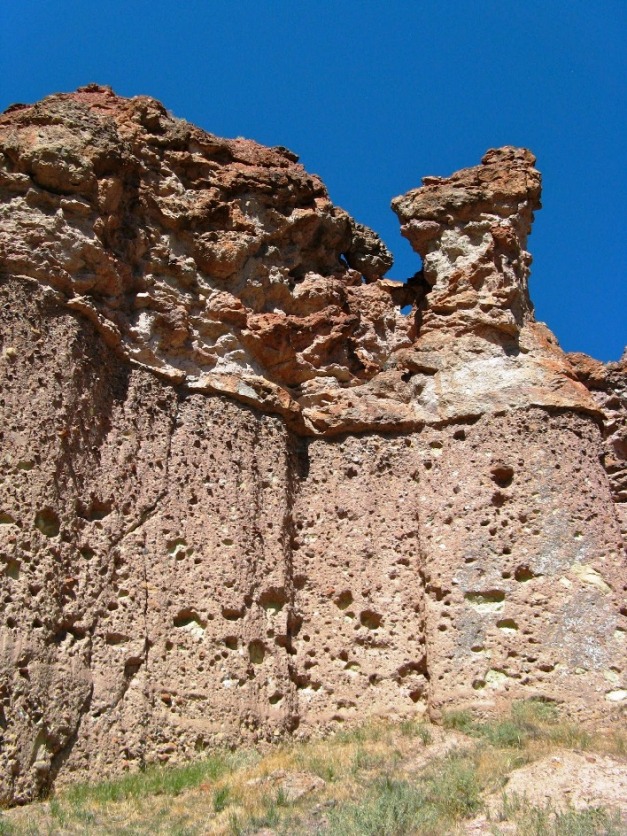 15 comments on “The Utah – Nevada Ignimbrite Flareup of 30 Ma”