Paricutin in eruption at night, 1947 http://luirig.altervista.org/pics/index4.php?search=Paricutin+Volcano,+Mexico,+in+eruption+at+night.+1947.&page=1

One of my earliest memories of books read while growing up was a tale about a volcano that grew out of a crack in a farmer’s field in Mexico. The notion that such a thing could actually happen goes a long way to upset the worldview of a child that the world remains as it is forever. It also tends to open the mind a bit to wondering if this can happen, why not that (insert your favorite disaster here) right here tonight? To a kid that was starting to read SciFi and enjoy the 1950s SciFi and monster B-movies in the US, the reaction was something along the lines of “Holy s*&^, this stuff is real! What’s next?” 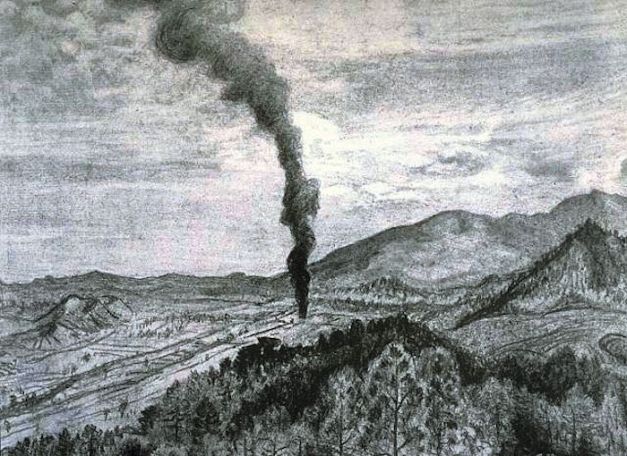 Drawing of initial phase of eruption from farmer’s field near village of Paricutin, 1943 http://www.volcano.si.edu/volcano.cfm?vn=341060

That volcano was Paricutin in Mexico, erupting from 1943 – 1952. It was generally a run of the mill monogentic cinder cone eruption, though this one was active for an unusually long time and had pyroclastic output for the first two years before settling down to an effusive Strombolian style eruption. It also put a decent amount of lava on the surrounding villages and fields.

Paricutin is part of something called the Trans-Mexican Volcanic Belt, which has been active in southern Mexico for around 20 MY (million years). The Belt is oriented roughly East – West and is some 1,000 km long. Mexico City sits in the middle of the belt toward the eastern end as does Guadalajara toward the western end. 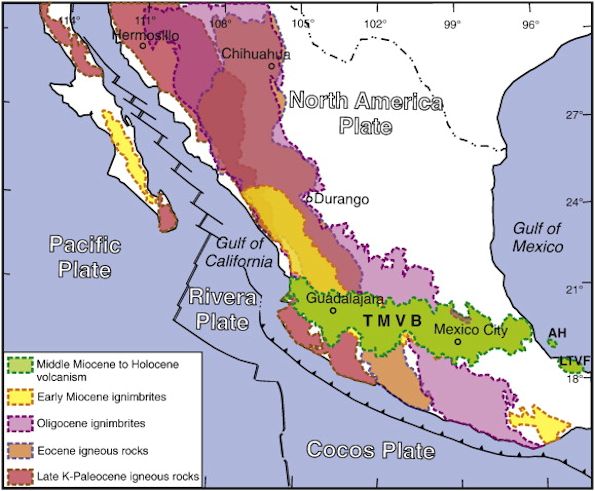 The Belt is the result of the collision between the North American Plate and the Cocos Plate. Cocos is traveling roughly NNE while the North American plate is traveling roughly NW. North of the Cocos plate on the west side is the much smaller Rivera Plate, thought to be a remaining fragment of the long departed Farallon Plate. A subduction zone and trench extends offshore of Mexico due to the subduction of Cocos under North America. That zone converts into a spreading zone offshore roughly west of the end of Belt in the middle of the Rivera Plate, making it a very complex location. 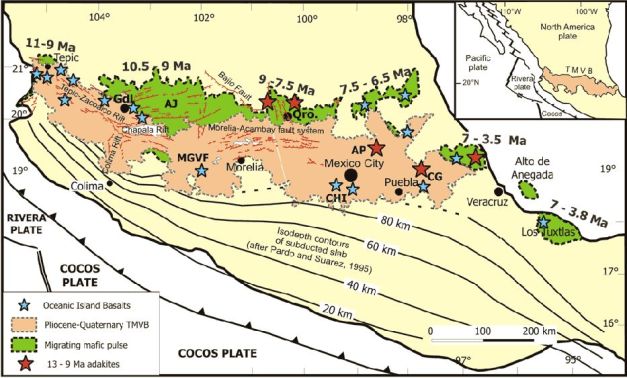 There are some 8,000 volcanic structures identified in this belt. Some are recently active stratovolcanoes like Popocatepetl and Colima. The vast majority are monogenetic scoria cones, estimated to number over 3,000.

Part of the subducting Rivera and Cocos Plate is thought to have flattened out and detached during the Miocene, leaving a string of small volcanic provinces successively dated from older deposits in the west to younger ones in the east. These lay across the northern portion of the Belt and were mafic in nature. The episode is called a pulse and lasted from roughly 11 – 5 MY ago.

Over most of the last 10 MY, there has been a variety of activity across the belt including caldera and dome complexes dated some 7.5 – 3.5 MY ago. There are ignimbrites measuring over 50 km3 during this phase in the belt with varying composition between dacite and rhyolite magmas. The upwelling magmas are diverse with multiple styles of eruptions. Stratovolcanoes were mostly absent between 9 – 1 MY ago but have recently started building again with the Colima Volcanic Complex being the most prominent example. Most of the monogentic eruptions were intraplate magmas, basaltic in nature.

The volcanic activity in and around the Belt over the last 20 MY has been remarkably vigorous and varied. This is not the typical back-arc subduction volcanic belt. It exhibits significant mid-plate style activity (think New Mexico), has calderas and significant pyroclastic deposits. It has a nearly 9 MY hiatus between stratovolcano construction episodes, yet most of the structures identified in it are monogentic scoria cinder cone volcanoes. The variance seems to be driven by the subduction of the Cocos / Rivera Plate and its transition into a parallel plate / detached plate before transitioning back into a subduction place recently. Finally, there is the transition within the Rivera Plate itself from a subduction to a spreading center. I could not think of a more complex locale for a volcanic belt. This would be fodder for several more posts but sadly falls outside the limits of what I want to discuss today.

The formation of Paricutin is the first observed volcano from initial eruption to death on land, making it one of the more important eruptions in recent geologic history. Mariners have long seen new mountains come and go at sea as active volcanoes poke their heads above the surface of the water for a time.

Early photo of Paricutin volcano from Parangaricutiro 1943. This town was also buried in lava http://www.lakepatzcuaro.org/PostCard6.html

Prior to the eruption, people near the village of Paricutin, Mexico heard and felt sounds and vibrations that they described a thunder for three weeks. These noises were likely deep earthquakes as the magma forced its way to the surface. In Iceland similar noises were apparently recorded during the Bardarbunga caldera subsidence last fall and early winter.

On Feb. 20, 1943, a farmer who was burning brush noticed a crack in his corn field which was emitting rotten egg smelling gas, followed by ash and an increasing volume of material. His wife and oxen were working the field at the time. He was briefly disoriented looking for his wife and oxen and quickly decided to save himself. As it turned out, they had already fled to the nearest village – Paricutin – and were safe.

A Scientific American narrative of the opening noted that there was a long known pit in the corn field measuring some 5 m across and maybe a meter and a half deep. It was also warm and made strange underground noises. The farmer tried to fill the hole occasionally, but was never successful. A depression formed around the hole the previous August, but was mostly ignored. http://blogs.scientificamerican.com/rosetta-stones/2013/02/20/paricutin-here-is-something-new-and-strange/

That night the eruption really took off, building a 50 m high cone within 24 hours. It was 100 m high within a week. As time went on, the activity became increasingly violent. At this phase, it was vulcanian in nature, with bombs, lapilli, and the beginnings of pyroclastic activity. The pyroclastic activity makes sense as long as you remember that there were springs on the property that dried up as the volcano began poking its head above the surface. http://www.geology.sdsu.edu/how_volcanoes_work/Paricutin.html 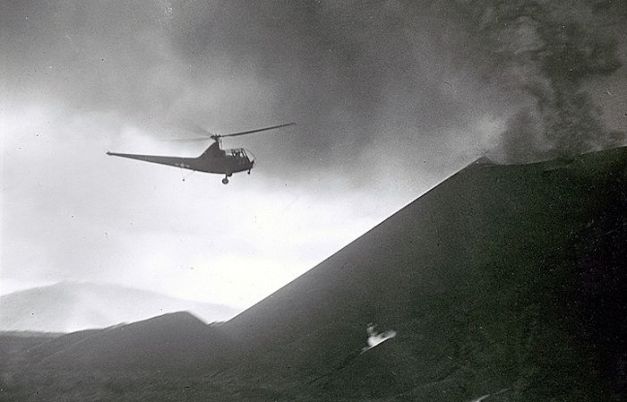 During March activity ramped up yet again and by June basaltic lava (aa) started toward the closet towns, eventually burying both Paricutin and San Juan Parangaricutiro. The second village’s location is marked today by two steeples poking their way above the lava. During the first year of activity, the volcano ejected an estimated 90% of everything it would eject during its nine-year lifetime. The Smithsonian reported that it had covered an area of some 300 km2 with ash and cinders over 15 cm deep.

At the end, the volcano covered some 25 km2 of surrounding land with lava. Active eruptions ended in 1952 with the cone at some 425 m high. Lighting from the eruptive plume killed three people during its active phase. 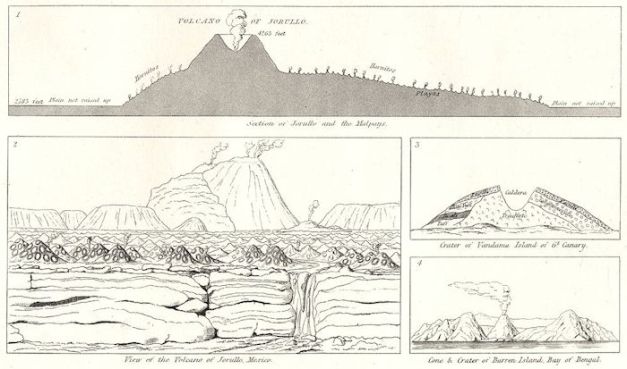 There is an earlier volcano named El Jorullo, also a cinder cone eruption some 80 m SE of Paricutin. It was primarily a cinder cone eruption active for 15 years between 1759 – 1774. It built a large cone that grew some 250 m during the first six weeks of activity and is now some 1,320 m tall. There are four smaller cinder cones associated with El Jorullo. The majority of its activity was phreatic and phreatomagmatic. Later eruptions were magmatic in nature. Like its close neighbor Paricutin, El Jorullo also destroyed a fertile agricultural district by building a cone, lava flows and tephra and lapilli ash falls. The 15-year long eruption is among the longest cinder cone / scoria cone eruptions known. There are suspected later eruptions in 1958 that were not confirmed, though fumarole activity has been observed. http://link.springer.com/chapter/10.1007%2F978-90-481-3325-3_13 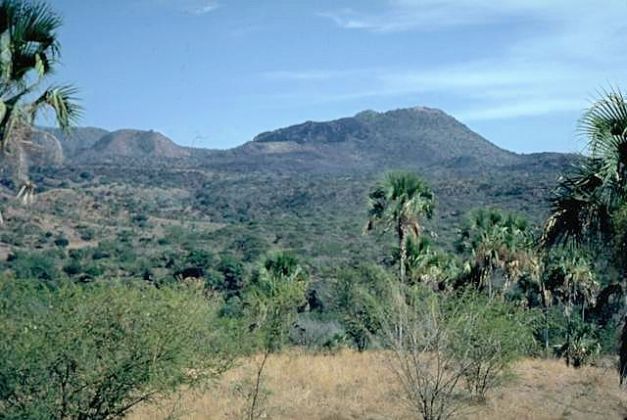 Why is Paricutin important? It is important in recent geologic history that it was the first opportunity for volcanologists to observe the opening of a volcanic vent and construction of the very first mountain from that vent. They got to observe the initial growth, changes in activity, and eventually quiescence of the vent. This was never before or to the best of my knowledge after observed.

Paricutin volcano from the air showing the crater and some lava flow http://wallpaperstock.net/paricutin,-mexico_wallpapers_30580_1366x768_1.html

While this was a relatively simple scoria cone / basaltic eruption, it did present some unexpected surprises. The first of which was the vigorous pyroclastic activity, which I attribute to the thick water table in the area of the eruption. There were springs on Dioniso Puliido’s property that dried up as the volcano started. This indicates to me that there was plenty of water in the ground, something that does not play well with basalt as we saw quite clearly at Eyjafjallajokull in 2010.

Paricutin in eruption circa 1943 http://en.wikipedia.org/wiki/Par%C3%ADcutin#mediaviewer/File:Paricutin_30_613.jpg

The other surprise was that the initial eruption lasted as long as it did, though in hindsight it was shorter than the second most recent scoria cone eruption at El Jorullo some 200 years earlier.

I have no logical conclusion to offer other than every single volcano is unique, and as I have observed in past postings, the more you know, the more you find you don’t know. Paricutin was a small but significant eruption, one that forced several villages to relocate, yet few people were killed as a result of the eruption and lava output. 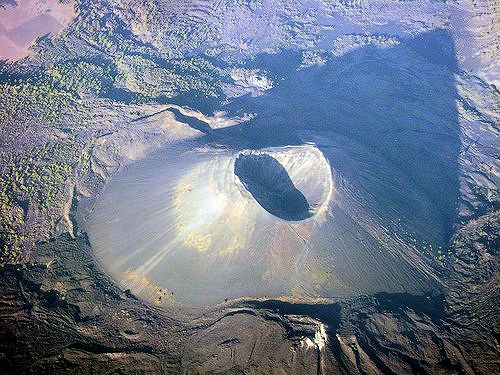 Paricutin volcano from the air https://www.pinterest.com/johnsantuccio/seven-wounders-of-the-world/

If central Mexico is this active, like the Southwestern US, it is going to be active again at a time and place of its own choosing.

Final thought is that in plate tectonics, when a subducting plate becomes detached, travels parallel to the bottom of the overlaying plate, some very strange and odd things are possible. We last saw this when discussing the La Garita caldera outbreak 35 MY ago. http://volcanocafe.wordpress.com/2013/12/23/what-happened-at-the-end-of-the-eocene/ 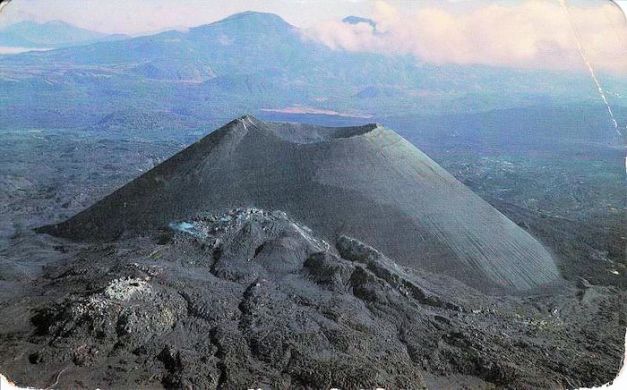