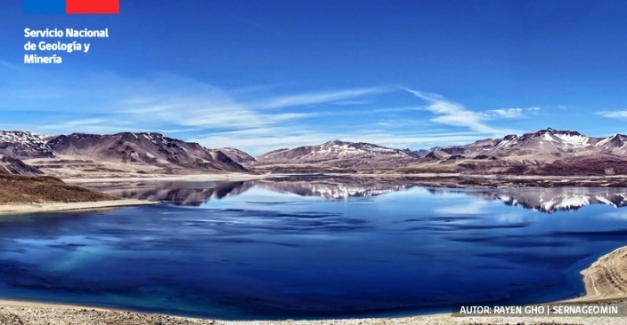 Laguna del Maule is a volcanic field on the border of Argentina and Chile in the Andes Southern Volcanic Zone.  The field includes 130 volcanic vents, 14 shield and stratovolcanoes of various ages, numerous lava flows, a caldera (depression) in the neighborhood of 20 km in diameter, and a lake covering 54 km2 in the caldera.  The entire field covers around 500 km2.  The system is located at the peak of the Andes, with the surface of the lake at 2,160 m.  Most of the field lies on the Chile side of the border, though volcanic products are widely distributed on both sides of the border.

The system came to my attention with a PhysOrg article about episodes of system uplift have created rings around the lake, much like bathtub rings, as the levels have changed due to various episodes of uplift.  The current episode began 2004 – 2007 and for a time was the strongest uplift measured from a volcanic system not currently in eruption.  Uplift accelerated 2007 – 2010 and slowed down a bit in 2014.  Total uplift 2007 – 2014 was 1.8 meters.  This uplift was also accompanied with strong seismic activity which allowed imaging of an inflating sill beneath the field.  It is also visible via satellite synthetic aperture radar (InSAR data).  There was also a northward component to the motion of GPS stations measuring the uplift.  Inflation was measured across the entire field, an area of 20 x 26 km.

The field is fairly remote with just over 1,500 living within 30 km of it. 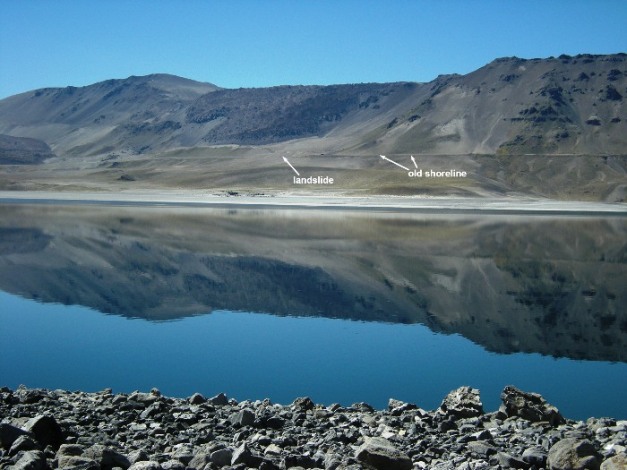 The Maule River was dammed by a lava flow which raised the lake level by over 50 m. Eventually the lake water eroded the lava dam to the point where the lake catastrophically drained. Note the flagged old shoreline. The landslide is the shite portion washing out part of the old shoreline. And a lava flow appears to be flowing down the slope toward the old shoreline (center). Image courtesy whyfiles.org

Local climate is arid and cold.  It was glaciated during the last ice age.  The volcano is partially in the rain shadow of Andean mountains farther to the west.  The lake gets most of its water via snowmelt.  The system is named after the lake it hosts.  And the lake is the source for the Maule River that flows from it.  The lake has numerous terraces from previous lake depths due to damming of the river, subsequent dam failures, and multiple episodes of uplift and subsidence. 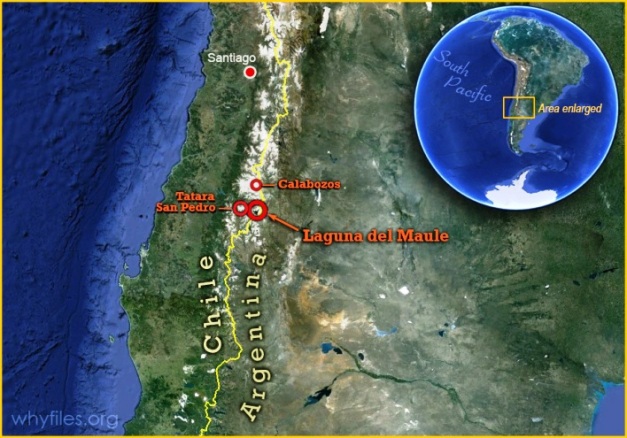 Location of Laguna del Maule on the border of Chile and Argentina. Image courtesy whyfiles.org

Modeling of the regions under the surface of the lake suggest the following: 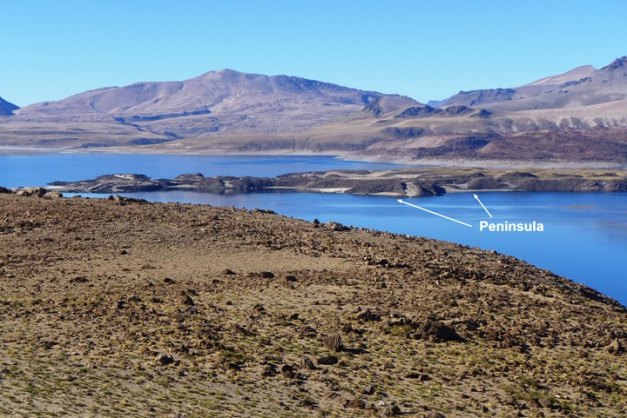 Peninsula across Laguna del Maule lake. It is a lava flow and a good indicator of the most recent uplift event in the caldera. Image courtesy whyfiles.org

The underlying magma chamber is quite large and well integrated.  Rhyolite lavas erupted 10 – 12 km apart show nearly identical major and trace element compositions.  The magma chamber is interpreted as a broad, low density magma body that is blocking the ascent of mafic magmas.  Instead these newer magmas are mixing with and destabilizing the existing magma chamber.

There are chemical similarities between rhyolite volcanism at Laguna and the Oruanui eruption at Taupo.  This may indicate underlying dynamics of magma formation and evolution.  Note that Taupo is an extensional region while Laguna is a back-arc system.  Activity at Laguna may also be related to back arc extension, though widespread extensional structures are neither observed nor the impact to local to regional extension cannot be confirmed.  Both are suspected at a low level by a few researchers. 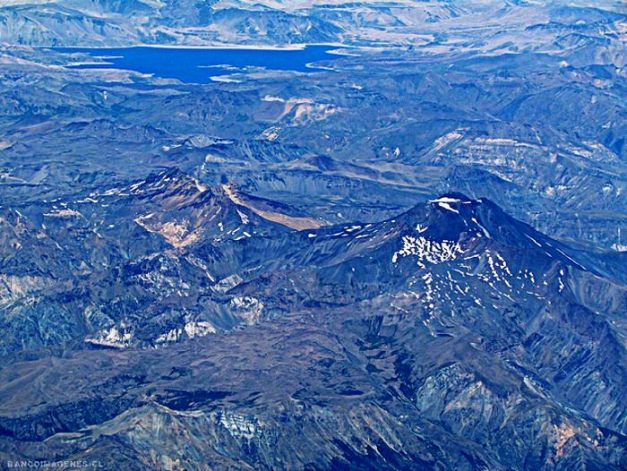 Two satellite rhyolitic volcanic centers surrounding Laguna del Maule (background). These are located to the west of the lake and I have yet to identify them by name. Image courtesy EverythingsElectric

Total uplift in the southern lake shoreline greater than 60 m implies repeated similar deformation episodes.  An analogy with crystallization ages in the Long Valley Bishop Tuff suggests that the 600 km3 tuff accumulated at 7.5 km3 / year over 80,000 years before it erupted.  Each deformation episode is taken to be 10 years, adding 0.5 km3 / year per inflation episode.  Do the math, and you end up with 15 magmatic episode similar to today’s inflation every thousand years.

Frequent shallow intrusion of magma at Laguna with an average recurrence of decades to centuries is consistent with repeated rhyolite eruptions since the last glacial maximum.  Mixing between the existing reservoir and intruding magmas precedes silicic eruptions by as little as weeks to years.  And the duration of the current uplift event has already exceeded these estimates.

Simplified schematic of post-glacial lavas and eruptions around Laguna del Maule. The inflating sill is depicted as a red outlined box. Each lava flow is annotated with age of the eruption and lavas. Image courtesy Miller, et all.

Bobadilla caldera forming eruption.  This was the most voluminous ignimbrite eruption at 950,000 years ago.  Volume of collapsed caldera was 80 km3.  This is the only remaining caldera structure.

Schematic of progression of volcanic activity at Laguna since 22,500 years ago. Image courtesy Singer, et al

Phase 2 began in the SE end of the lake and continued, increasing in eruption rate over time until it ended 2,000 years ago.  Eruption rate of phase 2 was nearly double that of phase 1.

More recent activity 25,000 – 2,000 built two scoria cones, 6 mafic to silicic fissure vents and pyroclastic rings, 4 andesite – dacite lava flows, 9 rhyodacite lavas, 11 rhyolite units around the lake.  These eruptions encircle the lake, with lava covering over 100 km2 of the 300 km2 basin.  It is the largest concentration of post-glacial rhyolites in the Andes and is comparable with rhyolite lavas and tephras of the Mono Craters chain in California.  Most of the recent eruptions have been small, erupting between 1 – 3 km3 per event.  The most recent dated flow is 2,000 years old. 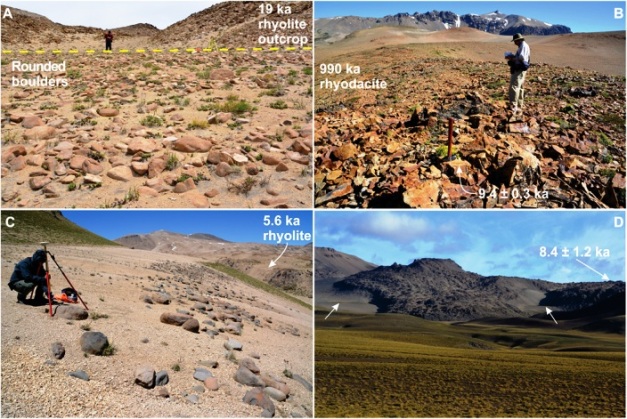 Erik Klemetti wrote an extensive article on Laguna based on presentations in the 2013 Geological Society of America annual meeting.  Klemetti’s article summarizes papers linked in the Additional Information section at the end of the post.  https://www.wired.com/2013/11/a-caldera-eruption-in-the-making-the-curious-story-of-laguna-del-maule/ 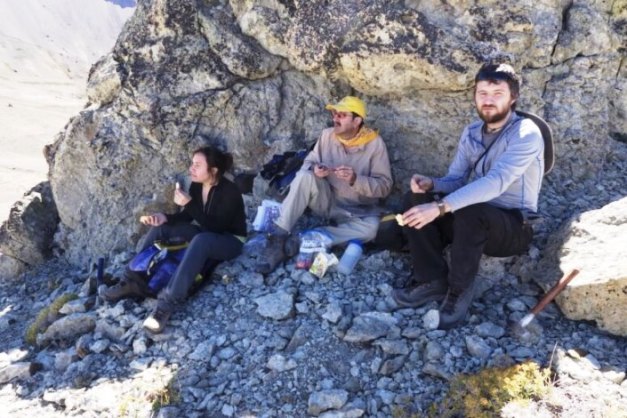 In it he described a talk by Brad Singer, who led a group mapping lava flows, domes and uplift at Laguna.  One of the members of the group, Wes Hildreth (USGS) is described by Klemetti as one of “the great volcanologists / petrologists of our time.”  Hildreth by 2013 had spent 15 field seasons mapping Laguna.  He is also the world’s expert on magmatism at Long Valley, California. 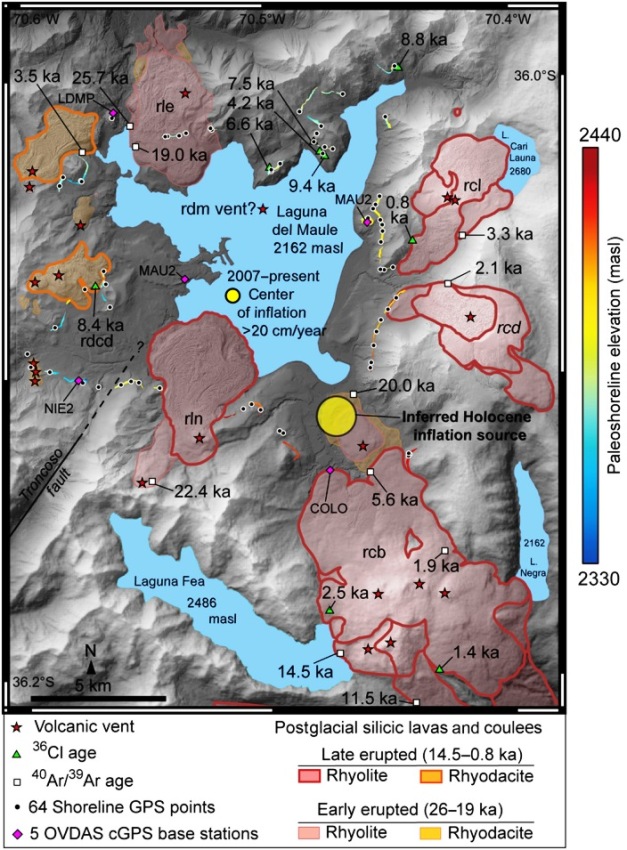 At Laguna, they found evidence of what is an inflating system, perhaps working its way toward the next caldera forming eruption.

Early eruptions at Laguna produced andesites / basaltic andesites.  These built numerous cinder cones, basaltic lava flows, and small stratovolcanoes around the lake.  Around 20,000 years ago, the magma system changed, erupting increasingly silicic magmas that are almost exclusively rhyolites today.  Singer suggests the magma system was replenished with basalt around 10,000 years ago at the end of the last glacial period.  Note that there was a caldera outbreak along the Alaska Peninsula as glacial ice melted following the end of the last ice age. 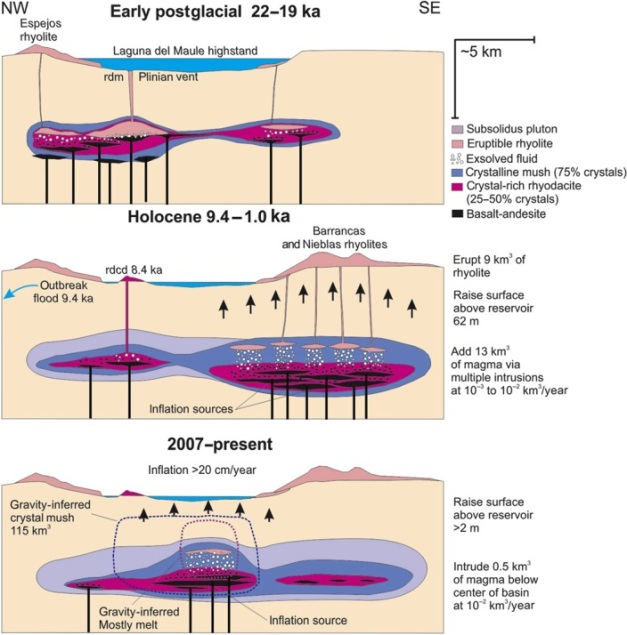 Singer’s and Hildreth’s work points out similarities between Laguna and Long Valley.  One of the patterns in large calderas are “leaky, pre-caldera lava flows.”  Klemetti’s explanation is that as the magma reservoir grows, it puts strain on the overlying crust, allowing small cracks to release small lava flows.  Laguna has a few dozen of these over the last 20,000 years.

Uplift rate at Laguna is described as “exceptionally high”, leading to no small number of recent articles discussing the next great eruption or supervolcano.  http://www2.latercera.com/noticia/columna-sismologia-la-laguna-del-maule-supervolcan-chile/ 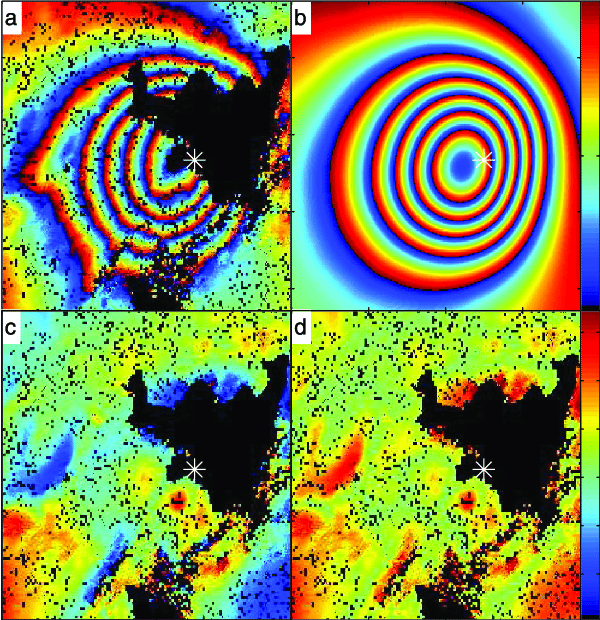 The rate of deformation is among the highest ever measured by a volcano not actively erupting.  As a comparison, uplift at Ututuncu above the Altiplano magma body is an order of magnitude slower than Laguna.  Yellowstone and Santorini are half to 20% that of Laguna.

Total uplift at Laguna put over 30 m of lake sediments above the surface, likely over the last century.  Current rate is ` 0.25 m/yr over the last six years.  This is estimated to be driven by 0.03 km3/yr magma injection into the magma chamber.  The long term average of new magma into the chamber over the last 25,000 years would be 0.5 km3/yr.

Recent surveys identified a minimum of 100 km3 of rhyolite and associated hydrothermal system 5 – 15 km below the surface, centered on the western side of the lake.  This is very much a low end estimate, perhaps by several hundred km3.  And this sort of eruptible magma can accumulate in a matter of centuries.  The magma thought to be crystal mush mobilized by basalt injections from below.

223 recently located earthquakes in the vicinity of Laguna are shallower than 5 km.  Most of these occurred under the most recent Nieblas and Barrancas rhyolite vents, along the periphery of the uplifting region.  Uplift slowed slightly in 2013.  There have been dozens of similar inflation episodes over the last two million years.

On one hand, we had a high uplift rate.  This particular uplift episode appears to be tailing off and should be followed by a period of no inflation or subsidence until the next uplift event begins.  That event may or may not be accompanied with an eruption.  Graphed rates of uplift look a bit like the integral sign in calculus, similar to a vertically elongated “S”.  Initial rates of inflation increase rapidly to a steady state high rate of inflation for several years.  As the episode ends, the final rates of inflation tail off rapidly to zero. 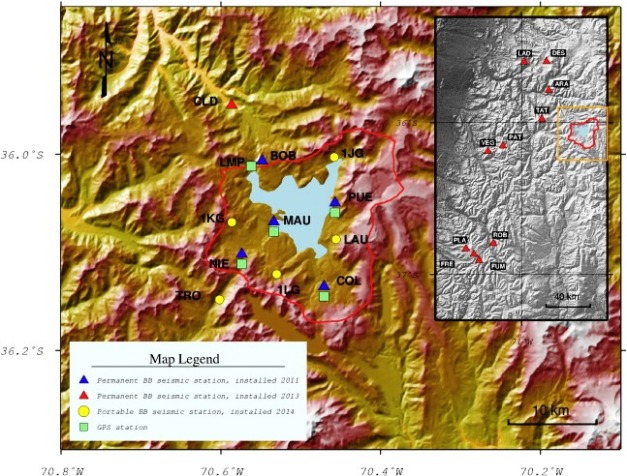 On the other, there is not an abundant surface hydrothermal system like we see at Yellowstone and Long Valley.  There are high concentrations of CO2 found in surveys of the lake.  While the most recent eruption from this system was 2,000 years ago, it remains a very dangerous system.  Its volcanic activity is currently listed as “Green” by Sernageomin. 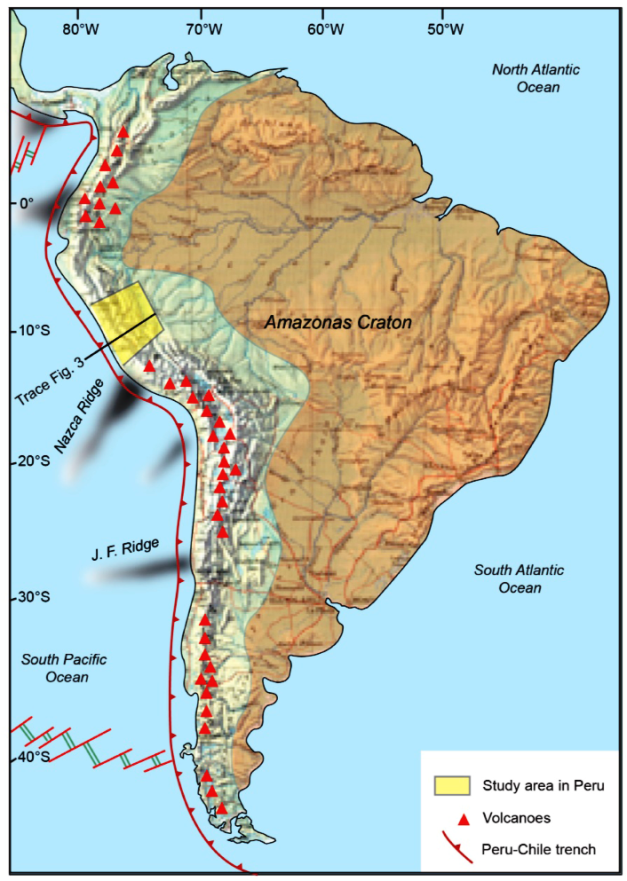 Location of four volcanic zones in South America. Note that the location of the subducting oceanic ridges and spreading centers generally coincide with breaks between volcanic zones. From south to north they are named Astral, Southern, Central and Northern. Image courtesy Pfiffner and Gomez

Volcanic activity along this portion of the Andes Southern Volcanic Zone is driven by Nazca Plate subduction under South American Plate at the rate of 74 mm/yr.  The Nazca Plate is 130 km below the surface at this location.  The Chile Trench is located offshore and the subduction drives both volcanic activity and megathrust earthquakes from time to time.  The region was rocked by a M 8.8 earthquake in 2010.  The total rupture length during that earthquake was 500 km.  Slip along the rupture was up to 15 m. 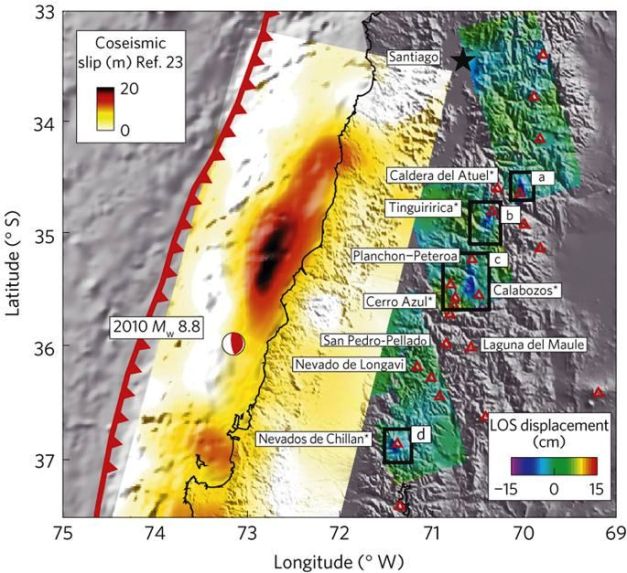 Location of four volcanic zones in South America. Note that the location of the subducting oceanic ridges and spreading centers generally coincide with breaks between volcanic zones. From south to north they are named Astral, Southern, Central and Northern. Image courtesy Pfiffner and Gomez

Crust thickness beneath the Southern Volcanic Zone of central Chile varies from 35 km in the south to 45 km to the north.  Maximum slab penetration varies from 130 km at 33 degrees South (Laguna is at 36 degrees south) and less than 100 km at 42 degrees south.  There are also variations in volcanic products with andesites rare in the southern volcanoes and basalts rare in the northern ones.

The segment of the arc hosts several large relatively recent silicic volcano centers, at least 60 active and potentially active volcanic centers, along with a number of caldera systems, three of which formed over the last 1.1 Ma. 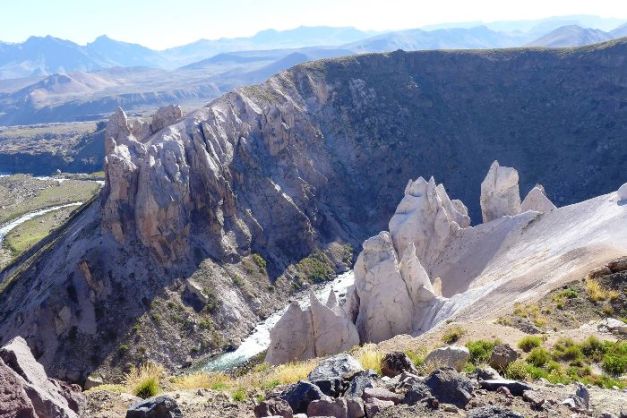 Anderson, Singer et all conclude in their 2017 paper with the following:

“The petrological model supported by the geochemical data is consistent with shallow magmatism that probably produced episodes similar to the continuing unrest throughout post-glacial time.  Extrapolating the volume change estimated for the modern inflation yields a rate of mass addition consistent with that which produced the rhyolitic Long Valley caldera-forming eruption.  However, that this unrest is foretelling either a future caldera-forming event at LdM or an imminent eruption of any particular style is not clear.”

As usual in this business, the more we think know, the less we actually do. 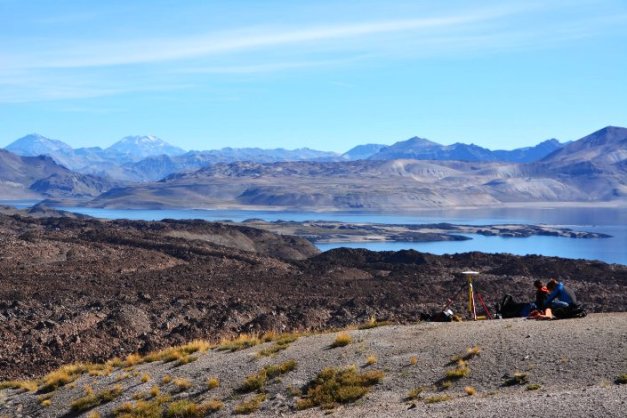