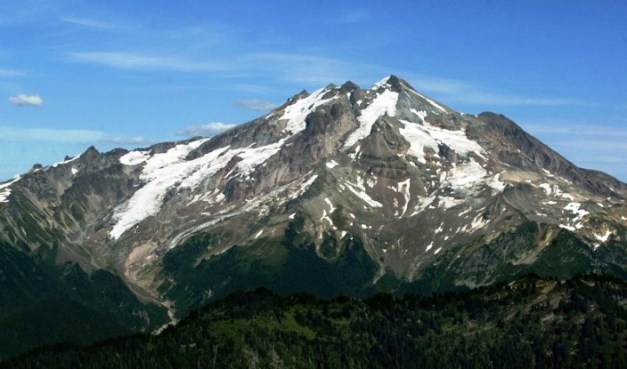 There are some 1.3 million people within 100 km of the volcano. Most of them are in the Seattle – Tacoma area SW of the volcano. The river valleys to the west of the volcano, the river delta and the shoreline of Puget Sound are among the faster growing locations in Washington State.

Glacier Peak tops out some 3,000 m above surrounding valleys, but this height is misleading as it is built on top of a high ridge. The volcano itself is less than 1,000 m high. In this way, it is similar to Churchill which has a vent relatively high up the flank of Mount Bono in eastern Alaska.

Glacier Peak was not recognized as a volcano by the first settlers, though the indigenous Indians locally remembered the last eruption. There are active hot springs on its flanks. I have found no reports of active fumaroles on Glacier Peak, which is interesting as the next photo has what appears to be a fumarole to the left of the summit.

This area of Washington State has a National Forest, logging, and farming in the river valleys. It is also relatively famous for sightings of a large, mythical hairy two legged creature named Bigfoot or Sasquatch. It is the functional equivalent of the Himalayan Yeti. Nobody has yet captured one, but there have been numerous sightings over many decades. Do they exist? Who knows? What I do know is that when these sorts of sightings gain a certain level of notoriety, people will manufacture evidence like they have done for the Yeti, Nessie and crop circles.

The age of the volcano itself is poorly known. However, lava flows have been dated back to at least 200,000 – 600,000 years ago. The action of glaciers on the flanks of the volcano has eroded early deposits. These deposits have also been buried by younger volcanic domes.

Prevailing winds in the region are generally west to east. This has tended to distribute most of the tephra deposits to the east of the volcano. There are several rivers and river valleys near the volcano that have carved valleys stretching generally east to west. The rivers empty into Puget Sound, which is an arm of the Pacific Ocean. 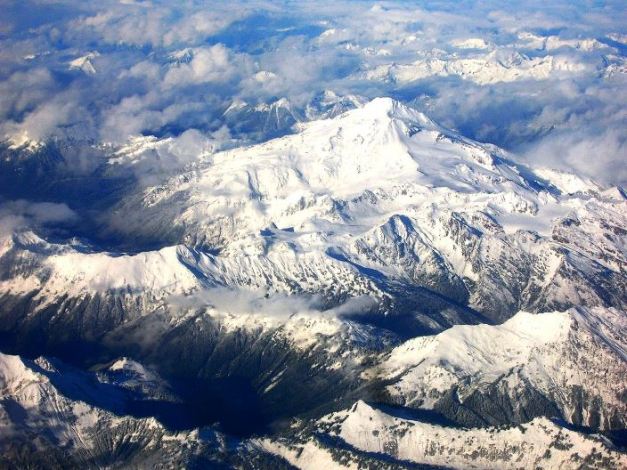 Glacier Peak from the north https://commons.wikimedia.org/wiki/File:Glacier_Peak_%28aerial_view%29.jpg

A 2012 paper described research into deep long-period earthquakes (DLPs) and reported nine events associated with Glacier Peak between 1980 – 2009. Over that period, there were also nine events associated with Mount St. Helens. DLPs were first observed at Pinatubo in 1991. They occur at mid to lower crustal depths beneath / near volcanoes that are deficient in high frequency energy. Actual cause of DLP earthquakes is so far speculative. A 2014 journal article suggests they take place near the top of an inferred stagnant mantle wedge and are caused by localized heating of dehydrating mantle wedge.  I am still trying to figure out what that means in layman’s terms.  https://pubs.er.usgs.gov/publication/70157381

The Pacific Northwest Seismic Network (PNSN) page on Glacier Peak can be found at the following link: http://pnsn.org/volcanoes/glacier-peak

Eruptive style of Glacier Peak is driven by dome building and collapse, pyroclastic flows and massive tephra falls. The eruptions also trigger significant lahars, generally to the west of the volcano. Typical eruptions tend to be quite explosive. It is most similar to the eruptive pattern of Mount St. Helens. Interestingly enough, though this is a stratovolcano, I have not seen any evidence of either caldera formation or flank collapse. Though as we have seen with heavily glaciated Alaskan volcanoes, with enough erosive glacier action, coupled with periods of dome building and collapse, it is possible to remove evidence of these unless the events were large enough. 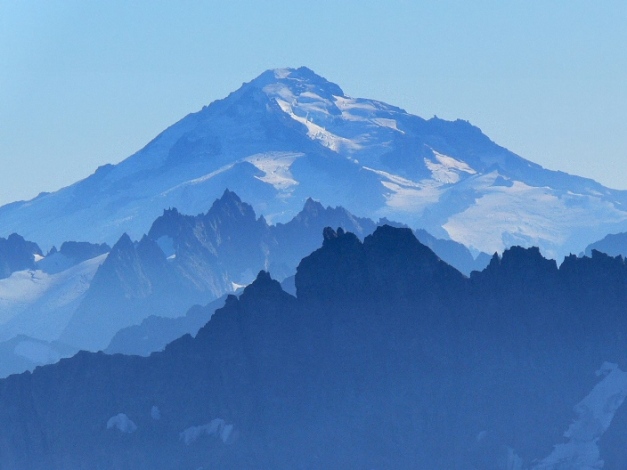 Since the ice sheets collapsed at the end of the last Ice Age, Glacier Peak has erupted with at least six episodes; the most recent was a VEI 2 around 1700 AD. There were three previous eruptive periods over the last 3,000 years. They were mostly associated with dome building, dome collapse and lahars.

The largest of these included a large eruption around 306 AD measuring VEI 4.9 that produced 0.75 km3 of dacite. That eruptive period was large enough to send lahars to the sea. 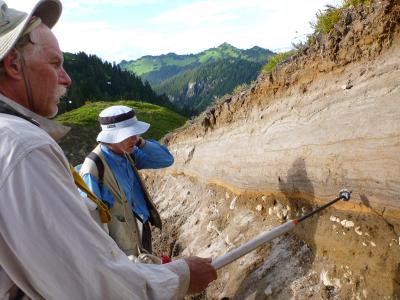 Tephra layer from one of the VEI 5 eruptions 11,000 BC http://volcanoes.usgs.gov/volcanoes/glacier_peak/hazard_tephra.html

The most vigorous eruptive period known was some 13,000 years ago. It is described in a 1987 Department of the Interior report on volcanic hazards considerations for siting nuclear power plants in the Pacific NW describes Glacier Peak’s eruptive history. The following two paragraphs paraphrase that report (I have taken the liberty to update what was written with more recent information) :

The eruptive episode some 11,000 – 12,000 BC produced three tepra fall deposits larger than 1 km3 dense rock equivalent. There are at least seven smaller tephra falls less than 0.1 km3 in volume associated with this period. There are many pyroclastic flow deposits and lahars that form thick fills in valleys that head on the volcano. Some of these exceed 100 m in depth. Tephra depth is around a meter thick 50 km downwind (generally east) of the volcano. Depth falls off to around 0.5 m some 70 km east. These tephra falls are the largest eruptions in Washington State in post-glacial time. They are less voluminous than the material ejected by the Mount Mazama (Crater Lake) eruption.

Glaciers at the summit of Glacier Peak, feedstock for lahars. http://www.whereiskylemiller.com/?p=2748

Pyroclastic flows associated with this eruptive period traveled some 15 km from the volcanoes. Some of the lahars reached more than 100km west of the volcano, flowing into the Pacific Ocean. The hazard assessment notes that the zones of highest hazard from lahars and pyroclastic flows are some 25 – 30 km from the volcano. Moderate hazard extends another 30 km downstream the river valleys. These valleys have seen lahars at least once every 1,000 – 3,000 years. The intermediate hazard region has seen lahars and floods several times during the last 3,000 – 6,000 years. The low hazard areas greater than 70 km downstream saw lahars and floods during the large eruptive period 11,000 – 12,000 BC and during another eruptive period some 5,000 years ago. 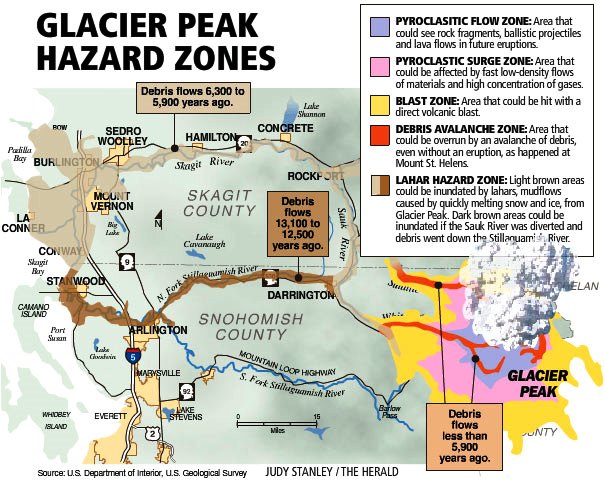 The British Geologic Survey VOGRIPA database lists the three large eruptions mentioned earlier as taking place in 12484 BC – a VEI 5.7 producing some 6 km3 of dacite bulk volume. The next one around 12,044 BC was a VEI 5.0 and produced 1.1 km3 of dacite. The final one in the series was a VEI 5.0 in 11151 AD that produced 6.5 km3 of dacite. Error dating the two most recent eruptions of this series is +/- 2000 years. http://volcanoes.usgs.gov/volcanoes/glacier_peak/glacier_peak_geo_hist_118.html

Magma supplied to Glacier Peak like magma supply to this portion of the Cascades is driven by subduction of the Juan de Fuca plate under the North American Plate. The Cascades are fore arc volcanoes.

The crust is some 25 km thick beneath the volcano.

The associated trench is called the Cascadia Subduction Zone. It stretches over 1,000 km from Northern Vancouver Island to Cape Mendocino, California. The zone is capable of 9.0+ Richter earthquakes. The last of which was January 1700. There were at least seven others over the last 3,500 years at an interval of 400 – 700 years. The volcanic arc is about 150 km east of the fault line.

To this amateur, it would seem that the subduction of the plate is not as quick or powerful as that of those other locations. Depictions of the subducted plate are typically drawn at a shallower angle. Don’t know if that means anything at all, but the notion of North America moving west (as we can see by the track of the Yellowstone hot spot across the continent) over the relatively stable and growing Juan de Fuca Plate is interesting to me. Does this mean that there is slower subduction? Perhaps it is related to the relative motion of all three plates involved – North American Plate moving generally westward; Pacific Plate moving generally NNW; and the Juan de Fuca Plate moving very little as its motion is only driven by growth from the spreading center.

Glacier Peak has been recently active, behaving a lot like Mount St. Helens (without the flank collapse) in terms of eruption style and explosiveness. It has been recently active and is still seismically active. I would think the greatest threat out of it would be lahar flows to the west and tephra falls to the east. This volcano is capable of large, violent eruptions and should be treated with a great deal of respect, especially by those living in the valleys below it. 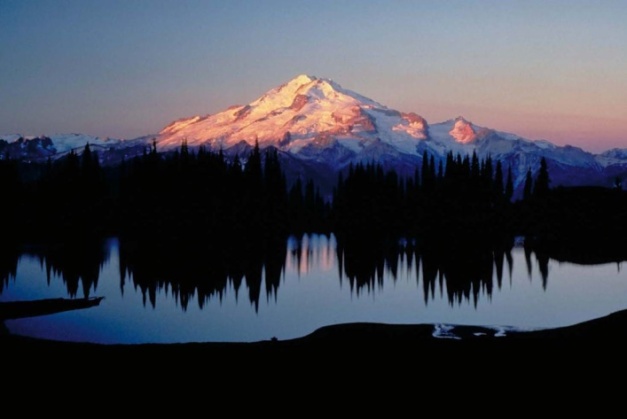