Pahto the Lonely: An interestingly-titled post on Mount Adams, East of St. Helens 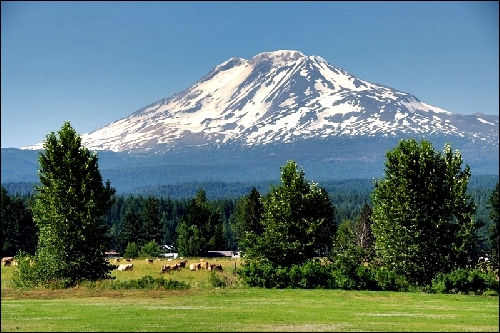 South flank of Mount Adams as seen from Trout Lake. Trout Lake is built on thick lahar deposits from a debris avalanche 6,000 years ago. (© Cheryle Battrum, via peakware.com)

We are delighted to welcome our reader Michael (better known to us as mjf) for a not-only-interestingly-titled-but-really-good guest post. Thanks Michael!

Mount Adams, also known as Pahto or Klickitat to local Native American tribes; located in remote wilderness in southern Washington State, USA; is an often-forgotten potentially active andesitic stratovolcano that rises to a prominence of 2.4km (1.5 miles), some 60km (37 miles) east of its infamous Cascade Range sibling Mount St. Helens. Its other neighbouring volcanoes are Mount Rainier; 80km (50 miles) to the north; and Mount Hood; 90km (55 miles) to the south. Most of Adams’ western half is part of the Gifford Pinchot National Forest, and its entire eastern half is Yakima Indian Reservation territory, mostly closed to the public. It is the only Washington volcano located on the Cascade Crest. 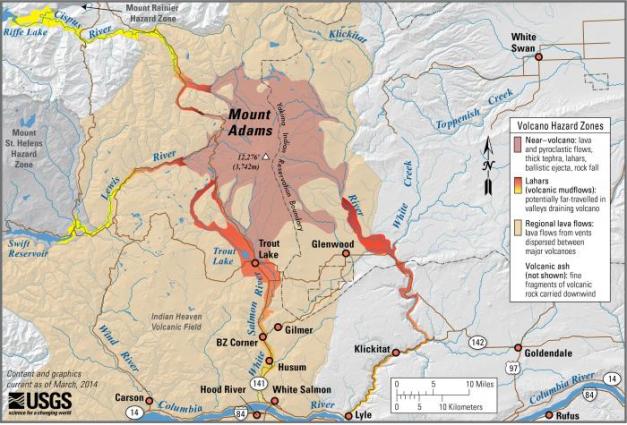 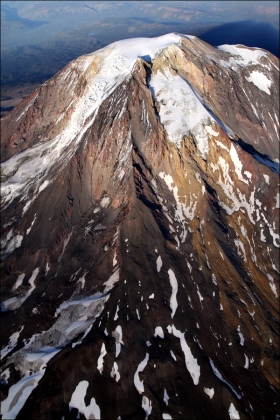 At an elevation of 3,742m (12,276 ft), Adams is the second-tallest mountain in Washington behind Rainier. The volcano is impressively large: having erupted about 300km³ (70mi³) of material in the last half-million years, Adams is the second most voluminous Cascade volcano; only California’s Mount Shasta is larger. One-third of this material has been eroded away by glacial activity.

The mountain is the centrepiece of a 1,250km² (750mi²) volcanic field, which is comprised of more than 120 features: spatter and cinder cones, small basaltic shield volcanoes, and extensive lava flows – 25 of these features are flank vents on the mountain. The edifice is elongated in a N-S direction, and has a remarkably flat summit – so that when travelling by air, the mountain can easily be mistaken for the similarly shaped Mount Rainier.

Mount Adams’ most recent eruption was in around 950 CE, and its eruptions are mostly effusive – a stark contrast to the violent tantrums of St. Helens and Glacier Peak. The volcano is one of the least active of the Cascades, resulting in the summit elevation being reduced significantly several times in its history. Large areas of the summit cone consist of extensively hydrothermally altered rocks, making debris avalanches a significant hazard. The peak was covered in material during the legendary 1980 eruption of Mount St. Helens; the prevailing winds sent the huge ash cloud directly over Adams. 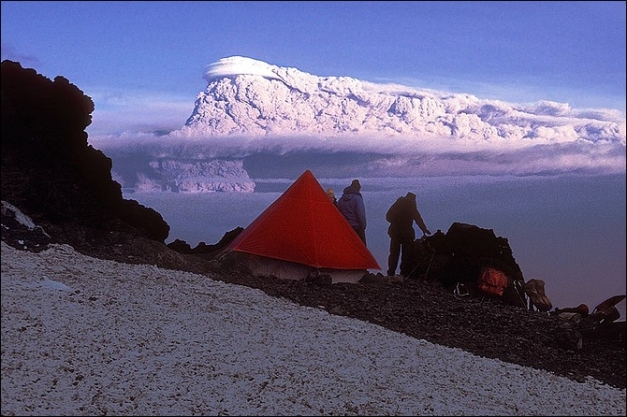 Mount St. Helens’ May 25, 1980 eruption as seen from the top of 7,800 ft. South Butte. Ash from the May 18 eruption coats the glacier in foreground. (© Darryl Lloyd, via hoodrivernews.com)

Most of the history of the volcano is poorly known, but the most important information is available. Early eruptions in the area began about 940,000 years ago (940 ka), all of which were basaltic, and created the bulk of the volcanic field now surrounding the mountain. Edifice construction began 520 ka, and was originally focused 3km (5 miles) south of the present summit, shifting to its current location by 460 ka. An apron of lava flows, extending 15km (9 miles) radially around the focus point, was subsequently constructed.

The vast majority of the volcano’s activity was clustered into three pulses: 500, 400 and 50-30 ka. Intermittent eruptions occurred between pulses, meaning the volcano never entirely shut down in that time. The summit cone was constructed in the last pulse, with a small tephra cap marking the last Pleistocene activity of the volcano. 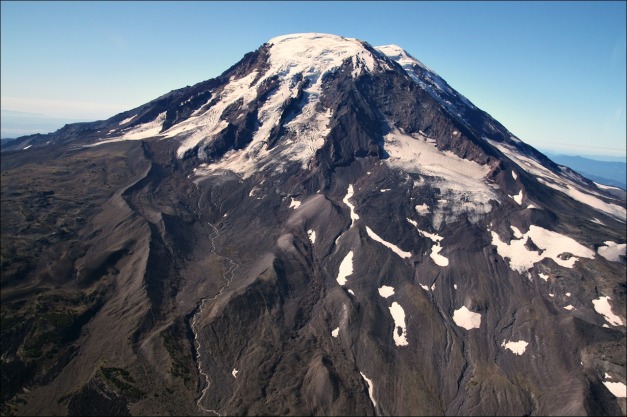 Mount Adams, view of the northern flanks. A series of lava flows were erupted on the north, NW, south and east flanks between about 7000 and 1000 years ago. (Photo: Aug. 2007 © John Scurlock)

Adams’ post-glacial activity (the last 15 ka) consists of ten eruptive units, only one of which originated from the summit. The top 150-250m (490-820ft) of the mountain forms a broad summit plateau, which exposes thin, glassy andesite lava flows, formed by early Holocene phreatomagmatic explosions as a result of interaction with the summit ice cap. These eruptions filled in an older summit crater. 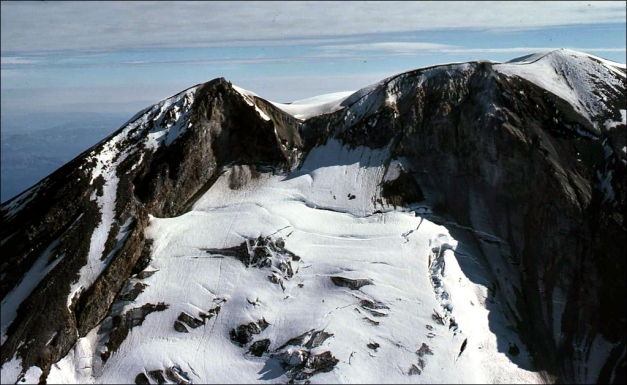 Aerial view towards the northeast of the summit region. (Photo: USGS)

Three of the nine flank units have an unknown date. Between 15 and 14 ka, two cinder cones fed lava flows on the upper and lower flanks of Mount Adams, and a short fissure eruption occurred in the surrounding field. Between 7.7 and 3.8 ka, three substantial vents at the base of the cone effused andesite lava flows and produced at least 14 explosive eruptions, when magma encountered groundwater. These units include both the most extensive and most voluminous eruptions in the Holocene history of Mount Adams. Between 10 and 8 ka, four small (VEI-2) explosive eruptions produced andesitic tephra, and don’t correlate with known lava flows. The eruption rate in the last 15 ka is much lower than that of the volcano’s long-term history.

Adams has never produced significant pumice producing eruptions. Occasional thermal anomalies and gas emissions demonstrate that Adams remains potentially active, although there are currently no signs that the volcano is about to wake up from its peaceful slumber any time soon. The volcano is monitored with just a single seismometer, and only a handful of microquakes have ever been recorded under the edifice. 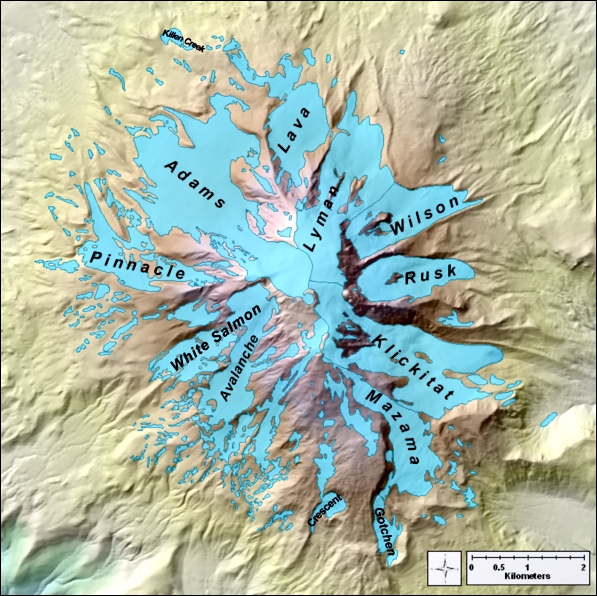 The glaciers of Mount Adams (Provided by elevation data from the USGS, via Wikipedia)

Here in the 21st Century, glaciers cover 2.5% of Adams’ surface, compared to 90% during the last ice age. Twelve major glaciers span an area of 20km² (7.7mi²), most of which originate from the summit ice cap.

On the northwest flank of the mountain, Adams Glacier cascades down a steep channel as a series of icefalls before spreading out at a lower altitude. At this point, the glacier becomes the source of the Lewis River and Adams Creek – a tributary of the Cispus River. The eastern lobe forms a small glacial tarn: Equestria Lake. Adams Glacier is the second-largest glacier in the Cascades, behind Rainier’s Carbon Glacier. The Pinnacle, White Salmon and Avalanche glaciers located on the west flank, are less voluminous, presenting a patchy appearance. Pinnacle Glacier forms a tributary of the Lewis River, and run-off from White Salmon and Avalanche drains into the White Salmon River. 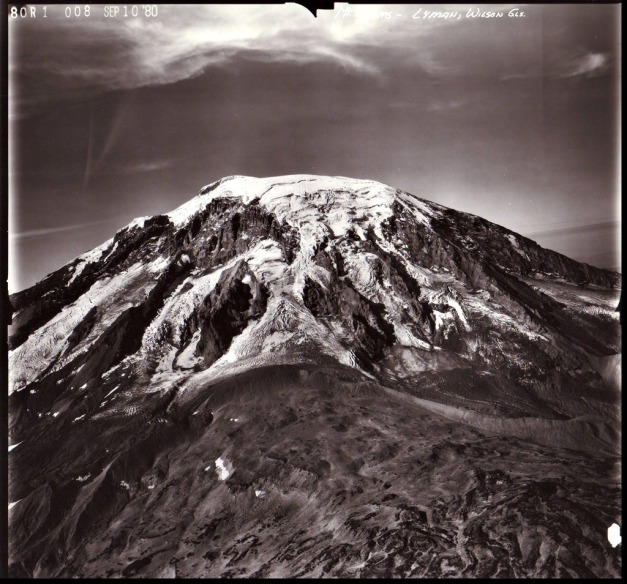 The south flank is relatively glacier-free, featuring the small Gotchen and Crescent glaciers, which drain into the White Salmon River. The rugged east side has four glaciers: Mazama, Klickitat, Rusk and Wilson. During the last ice age, they carved out two gigantic canyons: Hellroaring Canyon and Avalanche Valley. Klickitat and Wilson form tributaries of the Klickitat River. The north flank’s Lyman and Lava glaciers are the source of the Muddy Fork of the Cispus River. Half of the total glacial mass in 1904 had been lost by 2006. 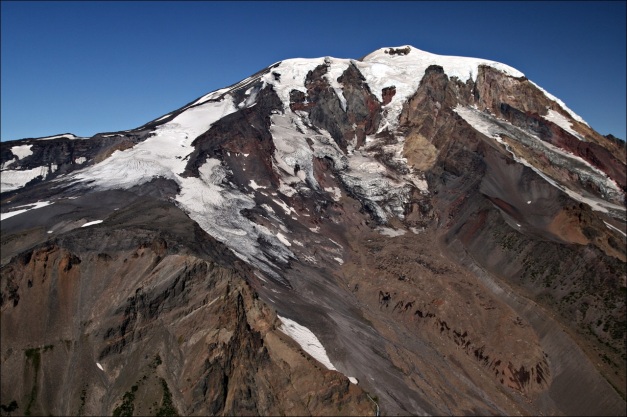 Summit of Mt. Adams seen from the SE, with the remains of Mazama (and Klickitat) glaciers. Mazama Glacier has been in a general state of retreat for over 100 years and lost 46% of its surface area between 1904 and 2006. (Photo: Aug. 2007 © John Scurlock)

A combination of the glacial coverage and intensive hydrothermal alteration has resulted in a weak and unstable summit region, where rocks have been transformed into clays (mostly kaolinite), iron oxides, sulfur-rich compounds and quartz. As a consequence, there have been several massive landslides, debris flows and lahars throughout the volcano’s history.

The largest Holocene event occurred 6,000 years ago, when a massive landslide devastated 14km² (5.4mi²) of the southwest flank. The avalanche transformed into the large Trout Lake lahar. A smaller event in the same location sent a lahar into the upper Trout Lake lowland, depositing large boulders. A repeat occurred just 200 years later, in the Great Slide of 1921, the largest historical collapse at Adams. Four million cubic metres (5 million cubic yards) of rock fell from the head of Avalanche Glacier, sending a lahar 6km (4 miles) down Salt Creek valley. The most recent significant event was in 1997, when a small landslide occurred on the upper east flank. 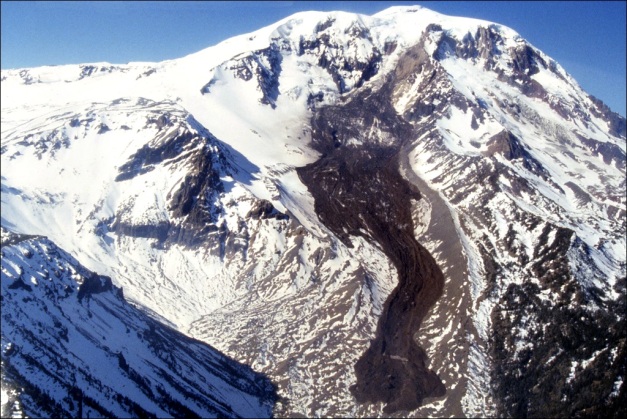 Native Americans in the area have composed many legends concerning the three “smoking mountains” that guard the Columbia River. The most well-known is the Bridge of the Gods tale, in which Wy’east (Mount Hood) and Pahto (Mount Adams) were the sons of the Great Spirit. The brothers both competed for the love of the beautiful La-wa-la-clough (Mount St. Helens). When La-wa-la-clough chose Pahto, Wy’east struck his brother hard so that Pahto’s head was flattened and Wy’east took La-wa-la-clough from him (thus attempting to explain Adams’ squat appearance). 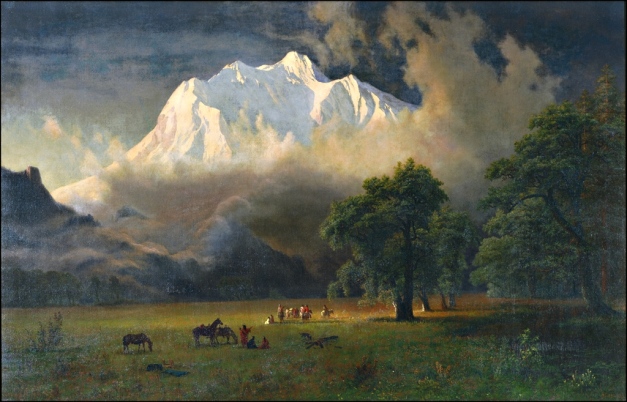 In 1805, on their journey westward down the Columbia, the Lewis and Clark Expedition recorded seeing the mountain; noting that it was “a high mountain of immense height covered with snow”; and thought it was “perhaps the highest pinnacle in America.” They initially misidentified it as Mount St. Helens, which had been previously discovered and named by George Vancouver in 1792. On the return journey in 1806, they recorded seeing both, but did not give Adams a name, only calling it “a very high humped mountain”. This is the earliest recorded sighting of the volcano by European explorers.

During the 1895 Mazamas expedition, the first heliography between several of the peaks of the Cascades was attempted with some success. A party on Mount Hood was able to communicate back and forth with the party on Mount Adams; however the parties on Mounts Rainier, Baker, Jefferson, and Diamond Peak were unsuccessful, mainly because of dense smoke and logistical problems. 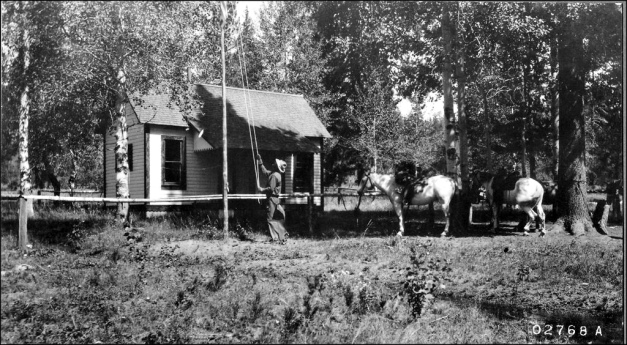 Adams is home to the oldest building in the Gifford Pinchot National Forest; the Gotchen Creek Guard Station just south of the A. G. Aiken Lava Bed. Built in 1909, it served as the administrative headquarters of the Mount Adams District until 1916. The building has been threatened by wildfires in the last decade; protective foil was wrapped around the building as a preventative measure during the 2008 Cold Springs, 2012 Cascade Creek and 2015 Cougar Creek fires. Fortunately, the building was not affected by any of the fires. 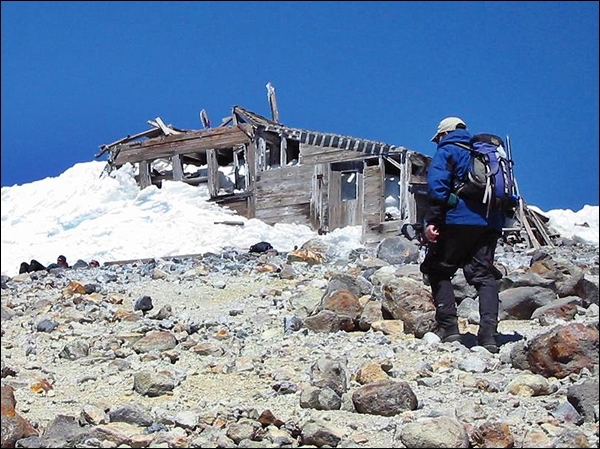 In 1929, Wade Dean formed the Glacier Mining Company, establishing a sulfur mine at the volcano’s summit. Due to limited success, the mine was fully abandoned in 1959. Adams remains the only major Cascade volcano to have been exploited by a commercial mine.

Mt Adams Webcam time-lapse video of the Aurora Storm on June 22nd, 2015. Watch the climbers on the mountain!

I would like to take this opportunity to thank Granyia and agimarc for allowing me to guest on their site. I welcome any feedback!

This morning we had a comment by Darvel Lloyd to have a look at his twin brother’s website and book; he wrote:

“I love your website! You would be remiss if you don’t mention Darryl G. Lloyd’s website on Mount Adams, Washington: http://www.mtadamsbook.com/. His splendid, beautifully-illustrated book, ‘Ever Wild: A Lifetime on Mount Adams’ can be ordered/purchased directly from him (longshadow [at] gorge.net).”

I did have a look, read a few of the truly captivating pages in the preview provided, and marvelled at the stunning photos in it. Although I am not a friend of advertising on our pages, I thought this is really special and nicely complements our post. From the book’s website: 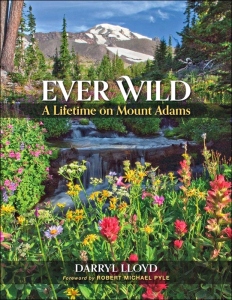 “What binds a man’s soul to a mountain? Through a personal journey spanning seven decades, Darryl Lloyd cemented his place in the sweeping story of Washington state’s Mount Adams. Lloyd is the foremost authority on this northern Cascades massif, […] Ever Wild is a mix of adventure memoir with enlightening doses of human history, geography, geology, botany, and a call for protection.”

I wish Darryl G. Lloyd and his book every success, and himself many more years on the mountain!

15 comments on “Pahto the Lonely: An interestingly-titled post on Mount Adams, East of St. Helens”