AVO survey team returning to ship following a day of investigation of Bogoslof August 2018. Newly formed dome is at left, with still active fumaroles. 1926 – 1927 dome in in the center. 1992 dome is to the right. Photo courtesy Gabrielle Tepp, AVO. https://avo.alaska.edu/images/image.php?id=127351

I wrote about the most recent round of eruptions at Bogoslof in the Aleutian Islands a couple years ago.  You can find the post here:  https://volcanohotspot.wordpress.com/2017/01/08/ongoing-eruptions-at-bogoslof-volcano-eruption-of-december-january-2016/

As of this writing, the volcano has significantly calmed down with the last recorded explosion being August 30, 2017.  We are at the point it in its life cycle that the ocean is in the process of reclaiming the newly applied island.  Current activity is generally limited to fumaroles.

WorldView-3 image of Bogoslof. This is close to maximum coverage by the island following the end of the eruptive sequence. Land area here is 1.4 km2. Note all the discolored water around the island. This is due to the ocean removing soft island material via wave action. Image courtesy Chris Waythomas, AVO, April 2018. https://avo.alaska.edu/images/image.php?id=116891

Alaska Volcano Observatory sent a team to inspect the newly rearranged island last August and brought back with them a number of outstanding photos, so it is probably time to update the VH readership on current state of activity at Bogoslof.

As a reminder, there is no monitoring directly installed on the island mostly due to resource and funding limitations for AVO.  So the island is monitored by triangulating webicorders on neighboring Okmok (52 km S) and Makushin (72 km SE).  https://avo.alaska.edu/volcanoes/volcinfo.php?volcname=Bogoslof 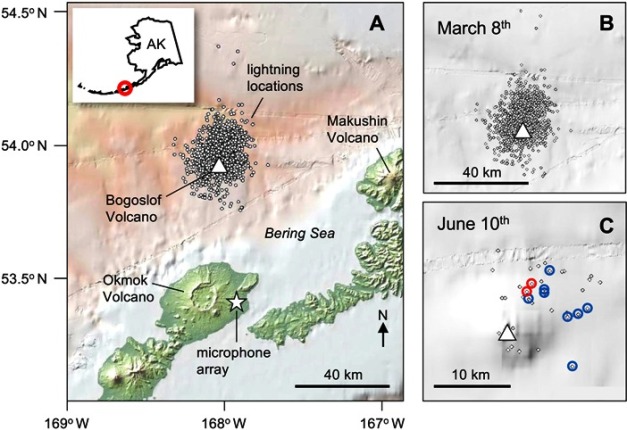 Lightning locations correlation with microphone array during a pair of Bogoslof eruptions. Note June 10 strikes are offset to the NE due to prevailing wind from SW. Plume for the March 8 eruption was essentially over the volcano. Image courtesy Coombs, et al. https://www.frontiersin.org/articles/10.3389/feart.2018.00122/full

There was some interesting science that fell out of this sequence of eruptions.  One was the actual recording and analysis of volcanic thunder.  This is generally extremely difficult to record, being overwhelmed by the noise of whatever is coming out of the eruption conduit.  Volcanic thunder was recorded some 60 km south of Bogoslof with a microphone array on the eastern flanks of Okmok.  Arrival time of the sound was triangulated among several microphones separated by distance.

Volcanic thunder, like other thunder, is caused by lightning, and we get three types of lightning in an eruptive plume.  Lightning is thought to be created by the buildup of static electricity due to the interaction of grains of volcanic ash with one another.  Three types include vent discharges, near vent lightning, and plume lightning.  Meteorological thunder is observed with sonic and infrasonic sensors up to 100 km from the lightning stroke.  Volcanic thunder is thought to carry information on the electrification of eruptive plume not observed by the electric discharge. 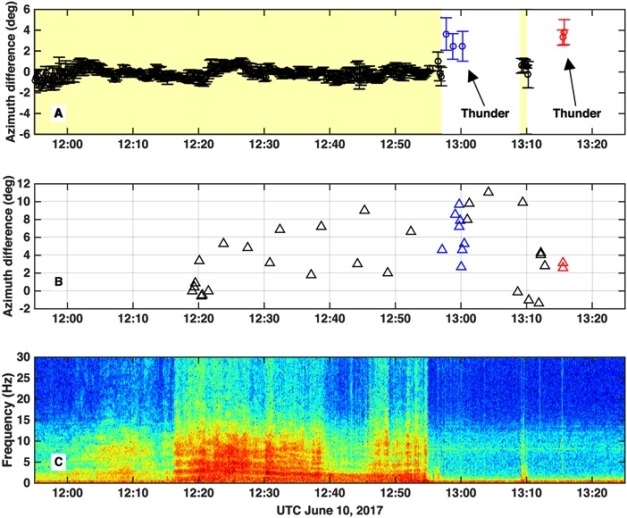 Comparison of data received from lightning detectors and Okmok sound array for June 10, 2017 Bogoslof eruption. Plot A is azimuth difference of sound (thunder) in degrees. Plot B is azimuth difference for lightning detectors. Plot C is frequency which also shows lightning. These plots show detections coming some 3 degrees E of the volcano, consistent with offset in eruptive plume due to prevailing wind. Image courtesy Haney, et al, USGS. https://www.seismosoc.org/wp-content/uploads/2018/06/WED.Brickell.1715.Haney_.pdf

Volcanic lightning also creates electrical discharges, which were used to verify ongoing eruptions.  These discharges are sensed by global networks.  One of them is the Global Very Long Frequency (VLF) network, able to sense discharges as far as 4,000 km away.

The March 8 eruption was the most prolific producer of volcanic lightning discharges.  The June 10 eruption that destroyed the first dome was offset to the NE by wind.  Data on volcanic thunder and lightning for both of these eruptions was gathered and compared.  One result is that lightning in the plume continued 15 minutes after the eruptions ended on March 8.  Travel time between the analyzed lightning strokes on June 10 was around 3 minutes.  The Dutch Harbor station recorded underwater sound signals caused by plume lightning strikes hitting the ocean.

These were the first documented observations of volcanic thunder, though some may have been observed at the 1962 eruption of the Fayal Volcano, Azores.

Bogoslof is the top of a back arc undersea stratovolcano.  Typical eruptions have a strong phreatomagmatic component, are highly explosive, and deposit loose, unwelded ash, tuff, and surge deposits on the island.  This eruption sequence tripled the size of the original island for at least a little while.

Ocean waves have eroded substantial amounts of newly added material from the island since the last eruption on August 30.  The island is surrounded by discolored water due to mobilized loose material carried away by the waves.  By Dec. 2017, the island was down to 1.3 km2 with a small lake and a large lagoon (former lake).  The lagoon is the crater lake above the formerly active vent that is now open to the sea to the north of the island.

Steam-rich eruption from Bogoslof May 28, 2017. Note details of pyroclastics at the base of the eruptive column. Color of the plume demonstrates significant ocean water involvement in the eruption. Screen capture from Historical Eruptions and Hazards at Bogoslof Volcano, Alaska, Scientific Investigations Report 2018-5085, by CF Waythomas and CE Cameron, USGS. https://pubs.er.usgs.gov/publication/sir20185085

Bogoslof erupts andesites, basaltic andesites, and trachyandesites.  Eruptions are typically phreatomagmatic, with significant involvement of seawater during the eruptions.  Early and mid-eruptions are typically explosive and deposit ash and unconsolidated pyroclastic fall and surge materials.  Domes are generally emplaced toward the end of a typical eruptive sequence.  This sequence did create a dome in June 2017, but that dome was destroyed by a subsequent eruption.  The most recent dome was destroyed by an eruption on Aug. 30.

The most recent sequence had over 70 recorded explosive events Dec. 2016 – Aug. 2017.  Individual eruptions were explosive events that lasted minutes to tens of minutes, lofting plumes 9 – 12 km high.  During the first 2 months, AVO detected at least 30 explosive events, spaced 1 – 4 days apart.  The pace of eruptions slowed in February leading to a pause mid-March – mid-May.  Activity resumed May 17 with a series of new explosive events and the first dome construction.

The first dome was destroyed June 10.  A second dome was formed mid-August and destroyed by the last explosive event on August 30.  The volcano returned to quiet by the end of 2017.  The eruption did build a dome that was not destroyed during the eruption sequence.

Bogoslof field work in August 2018. Fumarole field in foreground. Steaming western lake next. 1992 dome to the right. Fire Island (another dome) offshore. Note all the birds that have returned to the island. Image courtesy Gabrielle Tepp, AVO, Aug. 2018. https://avo.alaska.edu/images/image.php?id=126291

For most of the eruptive sequence, the vent was submerged in shallow sea water, less than 100 m deep.  Most volcanic plumes migrated north over the Bering Sea.  There were three events that put ash on communities and seafarers to the east and south of the volcano.

Seismic monitoring of Bogoslof was difficult due to the remoteness of the island and lack of local seismometers.  Storms during the winter and tectonic tremor in the region masked any precursory seismic warning.  A hydrophone deployed in May shows later events were preceded by seismicity too weak to be detected at Okmok or Makushin.   No single AVO sensor detected all the explosive events at Bogoslof. 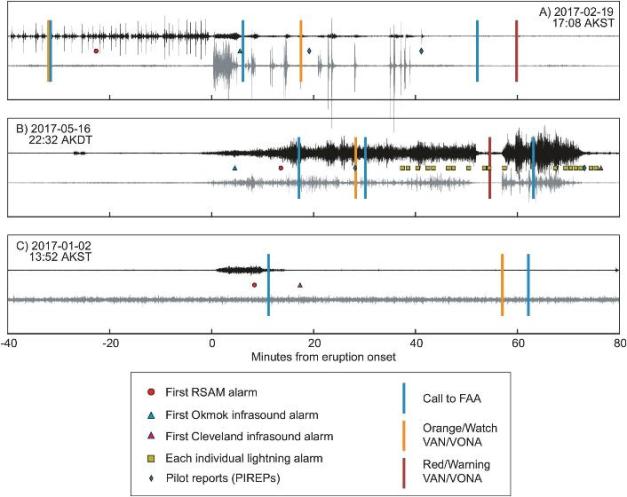 One of the important reasons that AVO exists is to provide timely warning of remote volcanic eruptions along the Aleutians and Alaska Peninsula to Pacific air traffic transiting the region.  Seaborne traffic is also warned of ashfall along their transit route.  The eruptive sequence at Bogoslof allowed AVO to work a multi-disciplinary approach to not only making timely warnings air traffic.  They integrated additional data streams into their quick response operation.  New data streams included infrasound and lightning detection.  It also allowed AVO to match their warnings to the volcanic hazards.  In the end, notifications were issued for 60 events, on average of 22 minutes after the event by telephone and 37 minutes after the start of the event in writing.  This average dropped to 15 and 30 minutes for more significant events that put plumes above 7.5 km.

Bogoslof is described as a back arc volcano, subduction fed from the subduction of the Pacific Plate under the North American Plate.  The front arc of islands in this are the Aleutians and the Alaska Peninsula.  Eruptive products are primarily andesites, basaltic andesites, and trachyites.

As to the island, it is rapidly being eroded back into the Bering Sea.  This round of eruptions did not create any long-lived dome.